This season marks the 22nd edition of the latest iteration of New York City’s Subway Series, which will feature two games in June at Yankee Stadium and two in July at Citi Field. Demand on the secondary market is high, according to secondary ticket marketplace TicketIQ.com, with fans driving prices to 40% above the season average at Yankees Stadium and 182% above the average at Citi Field.

Since Major League Baseball introduced Interleague Play in 1997, the teams have met 118 times and the Yankees hold a 69-49 all-time series advantage. The two teams split the first two games in the Bronx and will meet again this week in Queens.

TicketIQ has Low Price Guarantees on New York Yankees and New York Met tickets for every game on their 2019 schedules, in addition to Low Price Guarantees on MLB tickets for every game during the season. That means that if you find a secondary market ticket for less on a site like Stubhub or Seatgeek, we'll give you 200% of the difference in ticket credit. TicketIQ customers save an average of 5%-20% compared to Stubhub and Seatgeek.

This season, the average asking price for a ticket to see the Yankees at home is $133, but Subway Series tickets are averaged $185 for the games in early June. The get-in price for both games was right around $40. 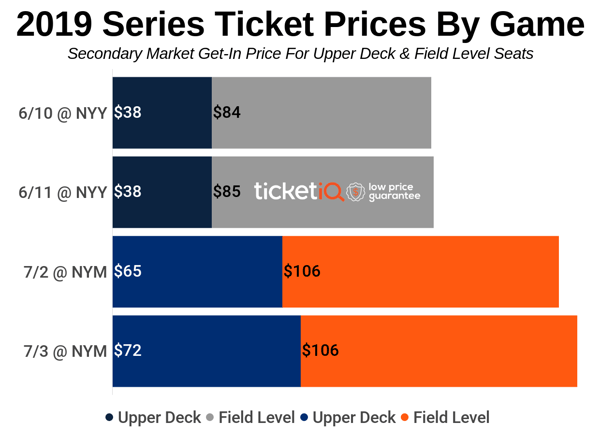 All four games are weekday night games. Tickets are available for all games on both the primary and secondary markets. The cheapest seats via Ticketmaster on the primary market for the June 10 and 11 games at Yankee Stadium are $30 for seats in the 400 sections. Similar tickets start at $38 on the secondary market.

Where To Buy The Cheapest Yankees vs. Astros Tickets In 2021

How To Find The Cheapest Yankees vs. Red Sox Tickets + All Face Value Options

Where To Buy The Cheapest Mets Vs. Nationals Tickets For The 2021 Season