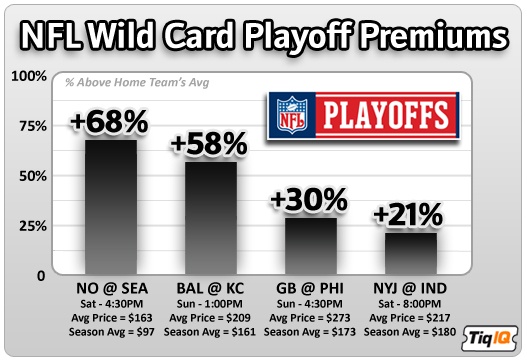 What does price say about excitement? Fans in Indy don't seem too pleased after a substandard season, so while they may be paying the second highest price for this round, they're not handing over too much more than they would for the average regular season game. This should open the door to some of the best deals of the opening round for the ticket buyers in Indy.
1
Over in Philly, fans paying a decent premium on top of an already-high average to see their NFC East champs take on the Packers, in what is could be a classic.  If questions about Vick's ability to play continue to swirl, the average price could drop over the next week.
1
The most excitement shown for this round comes from fans who might not have expected to see their teams get this far; Chiefs fans and Seahawks fans. While the averages prices are the two lowest of the WildCard round, the premiums on these tickets are by far the highest with seats selling for 58% and 68% above the two teams' home averages.  The Chiefs have played well all season, and the high premium combined with a relatively high avg. season price is an indication that fans are really excited for the first Arrowhead playoff game in sine 2003.  As for the Hawks, the high premium likely has more to do with the fact that their average price of $97 is the lowest of any playoff team than it does true enthusiasm for a playoff run.  With the defending SuperBowl champs coming to town, enthusiasm should be kept to a minimum.
1
For tickets to any of these games, click on the links below:
1
- Saints @ Seahawks

Cowboys Vs. Lions Tickets Are Most Expensive Of NFL Wild Card Round

Saints At Seahawks Tickets Down 41% This Week

The Highest and Lowest Discounts For This Year's Preseason NFL Tickets

The Road to the Super Bowl in Ticket Prices