› Detroit Red Wings  › Sharks Fans in a Feeding Frenzy for Gm 7 Tiqs: Prices at a 235% Premium

Sharks Fans in a Feeding Frenzy for Gm 7 Tiqs: Prices at a 235% Premium 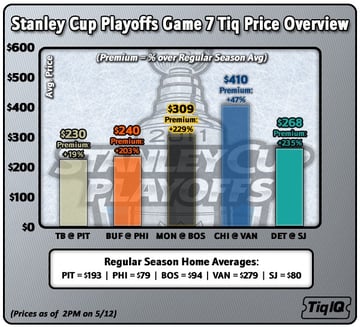 Tonight's Sharks/Red Wings Game 7 represents the fifth NHL series to go the distance so far this playoff season; and it appears it's the game 7 fans are most excited about. While only the 3rd highest in terms of price ($268/ticket), it is the highest premium compared to the regular season average price at HP Pavilion ($80), at 235%, narrowly beating out Montreal/Boston Quarterfinals game 7. Based on the data, it looks like fans in Silicon Valley are willing to pay more than they're used to to see if the Sharks can overcome their perennial playoff doldrums, hold off a surging Red Wings team, and get to Western Conference Finals for the 3rd time in franchise history.

For tickets to this game, and any other Stanley Cup playoff games, click here.

Where To Buy 2021 Minnesota Wild Playoff Tickets Primary market single-game tickets are not yet available. Wild season ticket-holders will have the priority access to purchase tickets starting the…

Where to Find The Cheapest Anaheim Ducks Tickets + 2021 Attendance Policy

How To Find The Cheapest Colorado Avalanche Tickets + 2021 Attendance Policy

How To Find The Cheapest Minnesota Wild Tickets + 2021 Attendance Policy

With Playoffs on Horizon, Rangers Host Bruins in This Week's Top NHL Game

The 2014 Round One NHL Playoff Ticket Price Iconographic

Canucks Fans Paying the Most for Possibility of Game 7 Heartbreak