The summer of 2011 may be the biggest year for Soccer in the U.S. since the '94 World Cup.  This week features the Semifinals of the the bi-annual Gold Cup, which pits nations from across North America and the Caribbean. Despite having to deal with some well established soccer nations, the U.S. team has 3 victories under their belt, and with home field advantage, will try to win the trophy for the 1st time since 2007.  Since the U.S. teams' 2-0 victor over Jamaica, prices for the Semifinals at Reliant Stadium up 100% to an average of $202 per ticket. 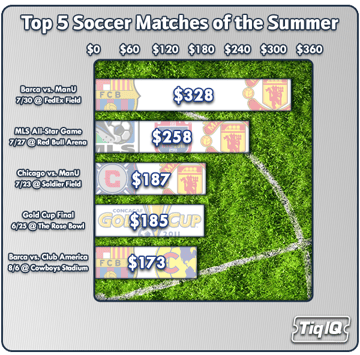 In addition to the Gold Cup, U.S. soccer fans are also geared up for a full slate of friendly matches, featuring such International heavyweights as Manchester United and Barcelona.  ManU plays 5 games over the course of the summer, and begins their tour on 7/13 against New England Revolution. Barcelona also has some high profile games, including matches against ManU and Club America. Of all this summer's matches, fans are paying the most to see ManU vs. Barcelona, Chicago Fire vs. ManU, and Barcelona vs. Club America. The MLS All-Star game, which showcases the MLS' best vs. ManU is also drawing significant fan interest.

For a sport that many think of as decidedly un-American, these prices are matching up with some of the highest profile summer sporting events, including the RedSox vs. Yankees, which has an average of $235 across all their games.   As for some of the MLS' fiercest matchups, the Portland Timbers and Seattle Sounder rivalry game, only two years into it's MLS incarnation, has an average price of $156, only $79 below the Yankees-RedSox, which some call the most rated rivalry in all of sports.

If the U.S. can make a run their 4th Gold Cup, it would certainly continue to drive visibility for Soccer in the U.S., which seems to be on a roll.  If not, U.S. Soccer fans still have an exciting summer ahead of them, not to mention a league that seems to be making all the right moves toward establishing soccer as a staple of American sport.

For tickets, click on any of the links below:

Where & How To Buy 2022 MLS Tickets Primary market face value MLS tickets and season ticket management for the 2022 season is provided by Ticketmaster, Seatgeek, AXS, Paciolan, and TicketPro.  Most…