We at TicketIQ thought it would be interesting to take a look at how much it costs on average for a person to go to a professional sporting event.  Our analysis found that the northeast had the highest premium in terms of average ticket price at $119 and the West surprisingly was the lowest at $82.  The rest of the results can be seen below: 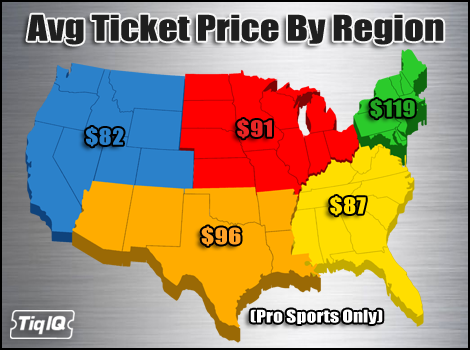 One possible reason the West (especially including California) has such a low price, might be due to the large amount of teams to root for in that region.  That competition in terms of fans disposable income might actually cause the average price for the region to decrease.

In terms of average price by state, we decided to include only those states that had at least 3 sports teams from three different professional sports leagues.  In some what of a surprise we found that the state of Illinois had the highest average price at $141.16.  Illinois was then followed by Massachusetts ($136.20), New York ($134.75), and Pennsylvania ($114.65) as the next three highest states in terms of average ticket price for professional sporting events. If your looking for a good deal though, you might went to head to Ohio or Michigan.  Ticket prices there go for on average $69 and $64 respectively.  Much of that due to the severely slumping economies in that region, which leads to a lack of discretionary income in these two states.