Since College Gameday first aired in 1987, it has grown into a national event, and a weekly glimpse into collegelife in the throes of a sports, media and alcohol binge. It also makes for some expensive tickets. 4 of the first 5 College Gameday choices have been the most expensive game of the week, according to our data. This week's visit to Camp Randal for #7 Wisconsin vs. #8 Nebraska is no different.  Since the choice was announced Sunday, prices are also up 8%. Other Gameday games this year have also seen a post-announcement bump. So while it's no news that College Gameday has been great for the game, it turns out it's also good for ticket prices. 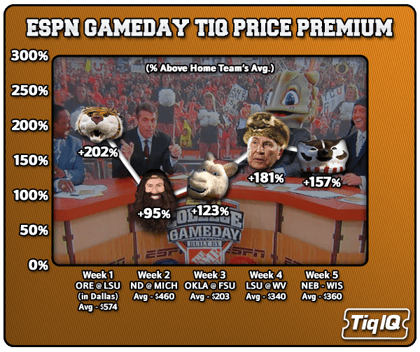 As detailed in the recent ESPN book, the first 'on the road' broadcast was a much tamer affair without any clever signs or foam heads, and all under the watch Touchdown Jesus. The game featured #1 FSU at #2 Notre Dame. That was 2003. 2004 was the first year with multiple broadcasts, at six. The 2011-12 season will feature 15 broadcasts, with the next beaming from Camp Randall, home of the Badgers. (Click here for TicketIQ Top 25: Nebraska and Wisconsin are #2 and #21, respectively).

With Nebraska's recent move to the Big 10, there's already discussion and tweeting that this could be the annual end-of-season trophy game. It seems the talk has worked, as Wisconsin fans are seeing Red and shelling green to see the 'new' rivals in town. At an average price of $360, this week's game trails only the Week One kick-off (which was at a neutral site) and the epic Michigan-Notre Dame night game, for most expensive Gameday locations of 2011-12.

In this season of unprecedented college foot turmoil, historical rivalry games are being throw to the curb and others are being forged out of money and media. Its not like anything we've ever seen, and buyers are paying up to make sure they don't miss a snap. If you're playing the price game---at a $430 Avg and a Get-in of $190---next week's Oklahoma @ Texas is leader right now. If Gameday picks the Cotton Bowl for the broadcast, as they likely will, you'll be lucky to find anything under $250 for what may be the final Red River Rivalry, Big-12 Edition.

For sold out seats, TicketIQ has Low Price Guarantees on all events at Camp Randall Stadium for Wisconsin Badgers football games as well as Concerts. That means that if you find a secondary market…

Breaking Down The 2015 Nebraska Football Schedule

Husker Tickets Amongst Tops in the Nation for Conference Play