› Carmelo Anthony  › After One Week, Linsanity Has Bigger Impact on Ticket Prices Than Last Year's Melodrama

After One Week, Linsanity Has Bigger Impact on Ticket Prices Than Last Year's Melodrama

For two straight seasons one of the biggest stories in the NBA season has belonged to the New York Knicks. Last year, it was The Melodrama and Carmelo Anthony's trade to New York after months of rumor and speculation. This year, it's Linsanity. While the two stories couldn’t be any different--one, a disgruntled superstar forcing a trade; the other, a classic underdog tale--- they both have had a significant impact on the Knicks home ticket price average. 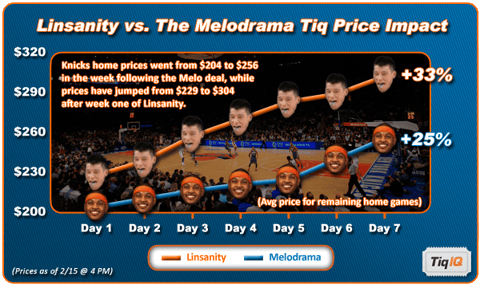 As shown above, in the week following the Carmelo trade last season, the average price for Knicks tickets at Madison Square Garden have jumped 25%, from $204 to $256. This year, Linsanity has had an even bigger impact, raising prices an average of 33%, from $229 to $304. While fans in New York love their superstars, the above comparison clearly shows that they love a great Cinderella story even more.

The Knicks brass are also thrilled at the being back in the center of the basketball universe. The 2012 edition, however, has come at a significant discount to 2011. With his salary of $18 million, the buzz generated by Caremlo ‘s trade cost the Knicks $805,000 for each percentage point of price increase. This compares to just $23,000 for each percentage point increase that Linsanity has driven.

For those looking for score a deal Knicks games the rest of this year, there are only a handful of games left with tickets under $100. If Lin can continue to help the Knicks win, come Spring, the current average of $304 may be as distant a memory as Lin’s spot at the end of the Knicks bench.

Where To Buy 2020-21 New York Knicks Tickets Single-game tickets for all Knicks remaining home games are available via Ticketmaster.

How To Find The Cheapest LA Clippers Tickets + 2021 Attendance Policy

The Melodrama's Effect on Ticket Prices

The one that got away, and one that's on the way? (...And the price to see them at The Garden)