Bobbleheads are consistently some of the hottest giveaways of the MLB season. Whether it be of a current star player, a team legend, or notable announcer or coach, fans young and old enjoy these characteristic collectibles.

The Dodgers are one of the teams that have really embraced the bobblehead, with a whopping 10 giveaways this year. The final promotion is tomorrow night with the legendary play-by-play broadcaster Vin Scully in bobblehead form. Perhaps the Dodgers organization felt this would be the final push to convince him to return to the Broadcast booth for an astonishing 64th season with the Dodgers in 2013. If so, it worked! 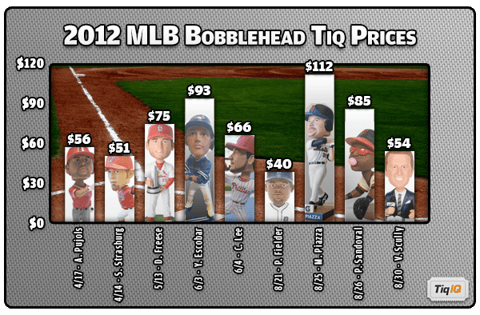 In comparison with other giveaways from various teams in the league--including Mike Piazza, Albert Pujols, and Stephen Strasburg--the Vin Scully Bobblehead night is one of the best bobblehead values of the season.   You'll only have to pay a premium of 26% over the Dodger's season average, which is lower than the average premium of 31% for all the bobblehead nights we tracked.  The highest premium for a Bobblehead night was Fireze, at 74%, and the lowest was Prince Fielder, which was actually an 11% discount to the Tiger's season average.

Don’t miss the opportunity to pay tribute to one of the most poetic men in sports with Vin Scully Bobblehead night tomorrow at Dodger Stadium. You’ll catch a great game too, as the Dodgers seek a series opener victory hosting the Diamondbacks with Clayton Kershaw dueling against Ian Kennedy on the mound. As always, TicketIQ has your hookup! Over 3,000 tickets are still available. Get-in the door for $26 here.

If Bobbleheads aren’t your thing, grab tickets to the rest of the Dodgers season here.

For the 2nd Straight Season, Nebraska Takes the Top Spot in the Preseason TicketIQ Top 25

Guess The Set List and Win 2 Tickets to See Phish!