It has already been quite the year for Beyonce. After taking off most of 2012 to raise daughter Blue Ivy, she returned to the spotlight making headlines everywhere when she was accused of lip-synching the National Anthem at President Obama’s inauguration. While she did admit to singing along to a pre-recorded backing track, she silenced the doubters by wowing an audience of over 100 million with her Super Bowl halftime show set, which included a brief reunion with Destiny’s Child. Many are even calling it the best Super Bowl halftime show ever. Add into the mix her HBO documentary and her 17th Grammy award, and 2013 is looking like it’s going to be a huge year for Beyonce. Now, she has announced that she will go back on the road for the first time since 2009/10, and Beyonce tickets for the Mrs Carter Show World Tour are red hot. 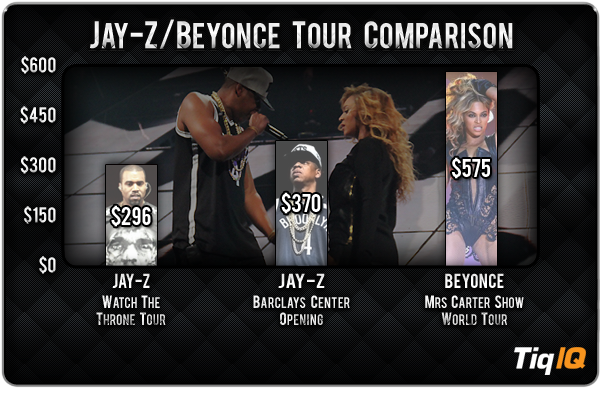 Since Beyonce tickets went on sale to the general public on February 9th (and selling out in a matter of minutes) the average get-in price for the tour on the secondary market has hovered around the $148 mark with the overall average price $575. The latter far exceeding that of her husband Jay-Z’s recent opening show at Brooklyn’s Barclays Center ($370) & his Watch The Throne tour alongside Kanye West ($296). Based on those prices, and pending further dates, it could easily be the highest grossing tour of 2013.

Kicking off at Belgrade’s Kombank Arena on April 15, The Mrs Carter Show World Tour will then take in a further 25 European dates, including London’s The 02 Arena, Milan’s Mediolanum Forum and Munich’s Olympiahalle before arriving in North America on June 28th as part of the BET Experience Event at LA’s Staples Center. Prices for the latter show are currently averaging $670 with a get-in price of $195.

Adding extra dates all the time, Beyonce is so far set to perform 23 shows across the USA and Canada including the 19th annual Essence Festival at New Orleans’ Louisiana Superdome between July 4th-7th and two concerts at Washington’s Verizon Center on July 29th (get-in price $211, average price $799) and 30th.

Currently, the July 9th date at Sunrise’s BB&T Center has the lowest get-in price at $94 with the August 2nd concert at Uncasville’s Mohegan Sun Arena the highest at $259. While the July 22nd date at Montreal’s Centre Bell is the least expensive average price at $237 with the tour finale at Brooklyn’s Barclays Center on August 3rd the most expensive at $983 per seat.

Based on her recent performance at the Super Bowl, fans lucky enough to score tickets should experience quite the spectacle. Beyonce has also performed Destiny’s Child material on all three of her previous tours, and rumours are already circulating that she may team up with Kelly Rowland and Michelle Williams once again for various dates. While the man who inspired the name of the tour, Jay-Z, is may also make an appearance.

Whether Beyonce flies completely solo or not, the Mrs Carter Show World Tour is sure to be a hit-packed affair with everything from “Crazy In Love” to “Irreplaceable” to “Single Ladies” expected to make the set-list alongside material from her new LP.

Sell your extra tickets for FREE w/ SellerDirect & WIN $200 in FREE Tickets to any event on TicketIQ.com

Scene Set For Another Bumper Year For Broadway Tickets

(UPDATE) Maroon 5 had to postpone their 2020 tour due to the Coronavirus pandemic. All rescheduled 2021 tour dates are at the bottom of this post. The tour will now begin on July 15th in Chula Vista,…

Jay-Z 4:44 Tour Prices Down 25% With Lots of Tickets Below Face Price