Coming off one of the most exciting college football weekends in recent years, the BCS bowl picture is a bit of a mess. Alabama's chances at a third straight national title died with Chris Davis' 109-yard touchdown run, and they're probably headed to the Orange Bowl. Ohio State and Florida State are conference championship game wins away from meeting in the title game, which will be the first time the game will be without an SEC team since 2005.

The Auburn Tigers could make their way to the title game if Ohio State or Florida State slip up in their conference championship games, but as of now they're looking at a trip to the Sugar Bowl, unless they lose to Missouri next week, then they're headed to the Capital One Bowl.

Again, it's a bit of a mess, but one way or another, a lot will probably change after this weekend’s Conference Championship games are played. So for now, here is a breakdown of the most up-to-date BCS bowl prices as well as a graph showing the trend for BCS National Championship tickets since last week: 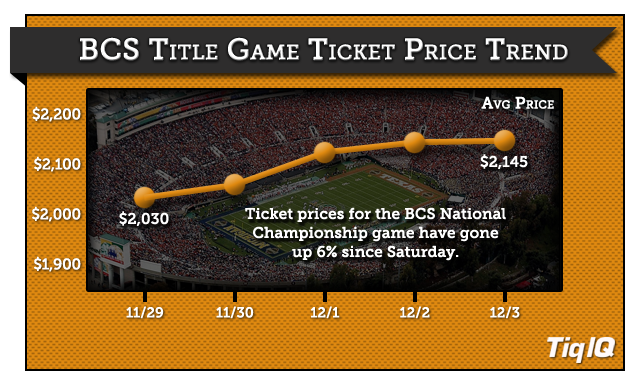 Bears vs Cowboys Tickets Drop 16% In Past Week