Yesterday, Dale Earnhardt Jr. was victorious at Daytona and took home his second Daytona 500 championship of his career. Prior to this week, Jr had only won twice since 2007. A win like yesterday's might not only be a huge thing for Earnhardt Jr, who has been struggling since 2007, but for NASCAR as well. Over on Fansided.com we took a deeper look into that possibility and here is some of that article:

In addition to a critical win for Earnhardt, it may be exactly what Nascar needed to boost sagging TV rating and attendance. The Daytona 500 is called the ‘Great American Race,’ or ‘The Super Bowl of Nascar’, which made this years lackluster attendance all the more troubling.  According to Forbes, 48 hours before the race, tickets were still available on the primary market and the get-in price on the secondary market prices were as cheap as they’d been in five years.  Not even a pre-race concert by Luke Bryan, arguably the most popular performer is country music, could bolster ticket prices from their low.

Prior to Earnhardt’s victory, the average price of Nascar tickets over the last four years has declined consistently from$170 in 2010 to a low of $103 last year.  Over that time, Jimmie Johnson has methodically dominated the sport, winning the Sprint Cup Championship in six out of the last eight years.  During that same stretch, Earnhardt. Jr. has won exactly one race. He had also been riding a 55-race winless streak prior to yesterday’s race.  The last time that Earnhardt won Daytona 500 was in 2004, when he was on top of the racing world.

Between 2000 and 2005, Earnhardt Jr. won 16 races, making him the sport’s most successful athlete during the peak of its popularity. Many believe that Earnhardt Jr. and his lineage to racing royalty, was a big part of the sport’s popularity during that period.  Those same fans might argue that the sport’s recent decline in attendance and TV ratings is also tied Earnhardt’s lack of success and visibility in the sport.

To read the rest of our article, click here. Below is a look at the average secondary market prices for NASCAR tickets over the past four seasons: 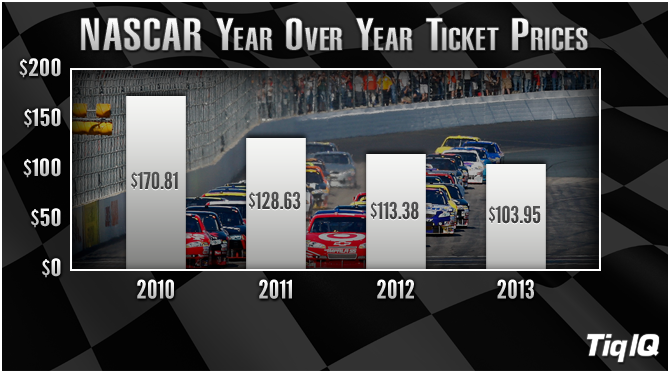 How To Find The Cheapest Kentucky Derby Tickets

Another Look At Daytona 500 Tickets