› TicketIQ  › How To Get Cheapest 2020 Essence Music Festival Tickets

How To Get Cheapest 2020 Essence Music Festival Tickets

To celebrate ESSENCE’s 50th Anniversary, the 2020 ESSENCE Festival of Culture will be extended to five days for the first time ever and will run from July 1 – July 5. As always, the festival takes place at the Superdome in New Orleans.

How Much Are Essence Music Festival Tickets

TicketIQ has Low Price Guarantees all Sold Out Music Festivals. That means that if you find a secondary market ticket for less on a site like StubHub or Vivid Seats, we’ll give you 200% of the difference in ticket credit. TicketIQ customers save an average of 5%-20% compared to StubHub and Vivid Seats.

What is 2020 Essence Music Festival Lineup

When and Where Is Essence Music Festival 2020

For the 50th Anniversary, the 2020 Essence Festival will be extended to five days for the first time ever and will run from July 1 – July 5. It takes place at the Superdome in New Orleans.

According to Billboard, Michelle Obama will headline the 25th anniversary of the Essence Music Festival. As Former First Lady Michelle Obama has been announced as a headliner for the 25th anniversary of Essence Fest of Culture in New Orleans. Obama will join already announced appearances from Mary J Blige, Missy Elliott and HER for the July 4-7 festival and conference. In addition to Obama’s appearance, an epic ‘homecoming’ musical line-up of more than 80 performers is slated at the Louisiana Superdome – including Mary J. Blige, Nas, Missy Elliott, H.E.R., Big Freedia, Davido, Frankie Beverly, Jermaine Dupri, MC Lyte, Pharrell Williams and Sheila E.

In it's 25 years, the Essence Festival has become a force in global Black culture with a focus in economic inclusion, cultural ownership and community development. The Festival now attracts more than 500,000 attendees each weekend with the three-day festival as the centerpiece. TicketIQ has Low Price Guarantees on Secondary Tickets For the Essence Music Festival.  Secondary ticket marketplace TicketIQ offers a Low Price Guarantee on all secondary market concert tickets and gives fans a wide variety of tickets to all shows to choose from. The Low Price Guarantee means that if you find a secondary market ticket for less on a site like Stubhub or Seatgeek, we'll give you 200% of the difference in ticket credit.  While the secondary market is the best option if cheap is your goal, if your goal is up-close, Ticketmaster.com has the best selection of floor seats, which range from $200-$1,200 for Friday night. For fans willing to commit to all three days, the secondary market has three-day floor seats starting from around $800, with 17th row seats going for $2,008 (Image below), or around $650 each day. 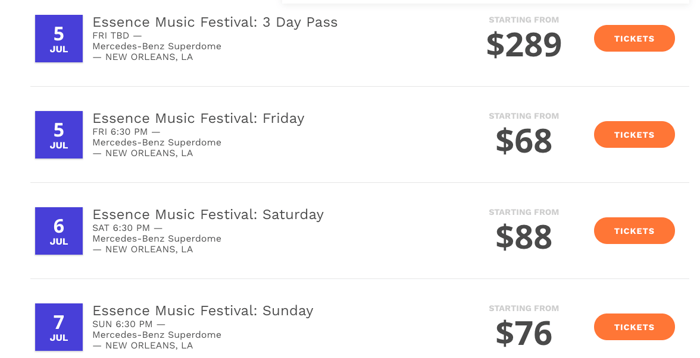 Tickets for the Essence Music Festival recently went on sale and fans across the country are particularly eager to lock up their passes for the three day festival.  Organizers are preparing for record attendance this year, especially following the announcement that the headliner will be Prince.  The musical superstar will be on the stage Friday night, July 4th, to ring in this year’s Independence Day.  Nile Rodgers will also be on the main stage Friday night, before a bevy of popular artists take the stage Saturday and Sunday.

Saturday the main stage will be occupied by Mary J. Blige, Jill Scott, The Roots, Ledisi, and Tank.  Mary J. has been a frequent participant at the Essence Music Festival and certainly one of the reasons that fans pour in to New Orleans to see the festival every year. On Sunday the 6th, Lionel Richie will be the primary performer on the main stage, but Charlie Wilson, Erykah Badu, and Tamar will also be performing Sunday.

Though these tickets may be high presently, ticket prices can always change and most likely will go up as we approach the festival.  Typically fans grab the seats as quickly as possible so the quantity of passes remaining is very low once May and June arrive. So the advice is buy now while the best seats are available and make sure you lock in your passes for the 2014 Essence Music Festival!

Orlando Magic 2021 Attendance Policy The Orlando Magic are allowing up to 4,000 fans to attend 2021 home games at Amway Center. Season ticket holders will be given first priority, followed by fans…