AC/DC, Jack White and Drake will all head to Indio’s Empire Polo Club this spring at the 2015 Coachella Valley Music and Arts Festival following the announcement of the official line-up. 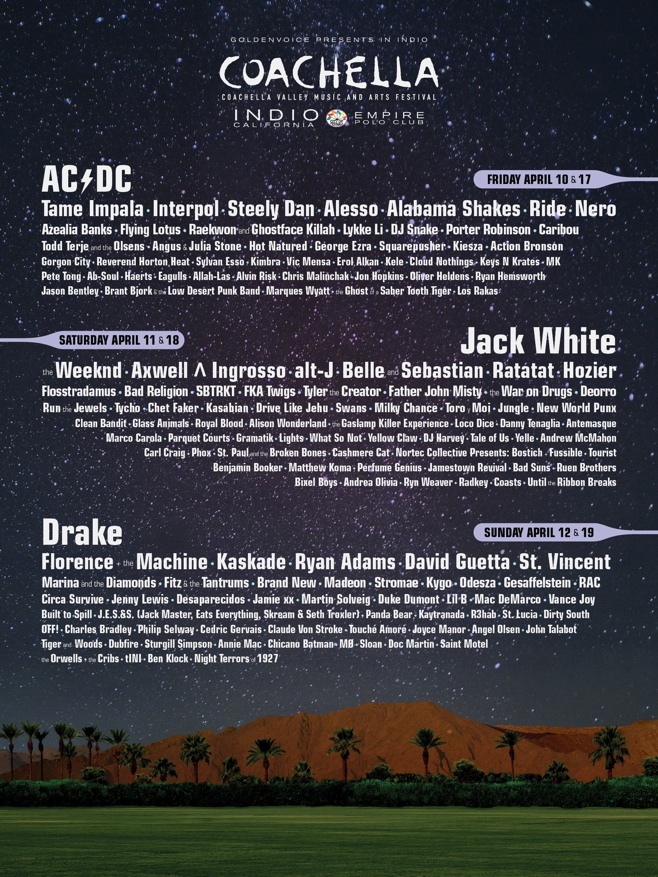 Nearly 600,000 people attended last year’s spectacular, grossing $78 million in sales of Coachella tickets, and the 2015 edition looks set to attract a similar number when it returns to the remote desert setting on the weekends of April 10-12 and 17-19.

Due to kick off their own tour in support of 16th studio album Rock or Bust a month later, hard rockers AC/DC will top the bill on the opening Friday, with the likes of fellow Australians Tame Impala, recently reunited shoegazers Ride and the legendary Steely Dan also confirmed to play alongside the likes of Interpol, Alesso, Alabama Shakes, Nero, Azealia Banks, Lykke Li, Caribou and Wu Tang Clan rappers Raekwon and Ghostface Killah.

Former White Stripes frontman Jack White, who scored the second solo chart-topper of his career in June with Lazaretto, will headline the Saturday, ahead of cult indie favorites Belle & Sebastian, Mercury Prize winners Alt-J and R&B troubadour The Weeknd, with Hozier, SBTRKT, FKA Twigs, The War on Drugs, Kasabian, Ratatat and Bad Religion just some of the other names also scheduled to take the stage.

Following in the footsteps of previous hip-hop headliners Outkast, Jay-Z & Kanye West and Dr. Dre & Snoop Dogg, Drake will help to bring the festival to a close on the Sunday, with superstar DJs David Guetta and Kaskade, singer-songwriters Ryan Adams and St. Vincent and alt-pop hitmaker Florence + The Machine also joining the likes of Fitz and the Tantrums, Brand New, Madeon, Jenny Lewis, Jamie xx and Mac DeMarco on the same day.

For those looking to get their hands on Coachella tickets, three-day passes are available on TicketIQ for both weekends with the first up for grabs at a get-in price of $107 and the second on offer at $498.

Warriors & Clippers Top List Of Most Expensive Rockets Tickets In 2015

Dave Matthews Band announced their North American 2020 Summer Tour dates which kicks off June 16th in Ucasville, CT and closes out September 23rd in Southaven, MS. Tickets go on sale to the general…

Music Festival Season By The Numbers: An Early Guide to Festival Ticket Buying in 2016

Top Concert Tickets Of The Week (4/6)