With Kobe Back, Lakers vs Clippers Tickets 11% Higher Than Last Season

It’s been a difficult year for Kobe Bryant and his lackluster Lakers. From owning the second-worst record in the Western Conference to on-court outbursts at teammates, the five-time NBA champion will again hit the showers for good in April and be forced to wait another year for a chance at his sixth ring. Time isn’t necessarily on Bryant’s side, either, as injuries have plagued the 36-year-old over the past two seasons.

Despite all of his team’s recent shortcomings, Los Angeles still remains rabid with Laker fever, paying more for Lakers tickets to home games when they host the Clippers in comparison to Clippers home games against the Lakers. Over the past five years, the two teams have held strikingly similar home averages against one another on the secondary market, but it is Kobe and his Lakers that own the higher ticket price at the Staples Center since 2010.

At the conclusion of the 2014-15 season, the Lakers will have hosted the Clippers 10 times in Los Angeles since early 2010, where the average price for Lakers vs Clippers tickets on TicketIQ over that 10-game span is $278.08. Over the 12 meetings between the Lakers and Clippers when the Staples Center has donned the Clippers symbol at center court in that same timeframe, Clippers vs Lakers tickets average at $276.86. 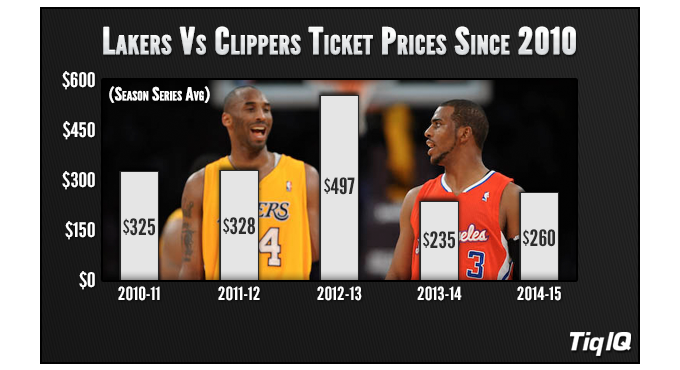 Los Angeles’ two NBA teams have experienced an obvious shift in power over the past several seasons, with the Clippers making three consecutive playoff appearances and bringing in All-Star talent in Chris Paul, Blake Griffin and DeAndre Jordan. The Lakers have relied on Kobe to lead a young cast of inexperienced talent, though minimal success has led to two straight season of sub-.500 play. Not all is lost for the Lakers, however, as ticket prices still remain high on the secondary market.

The Lakers’ top-priced home game against the Clippers was played on February 25, 2011, where tickets averaged at $556.42 on the secondary market. The Lakers hosted their second most expensive game against Clippers two years later on February 14, 2013, with average secondary price listed at $503.93. Each of the remaining eight games between the two teams when the Lakers served as host owned a secondary average higher than $200.

Dressed in red and white for the Clippers, the Staples Center welcomed its most expensive game against the Lakers on January 4, 2013, where average secondary price for Clippers vs Lakers tickets was $604.97. Three other games when the Clippers hosted the Lakers saw exceeded the $300 average, though two of the teams’ 12 meetings fell under the $200 average.

Though talent is dry, the Lakers have managed to keep ticket prices high at the Staples Center. With the Clippers looking to make a deep push into this year’s postseason and Kobe Bryant in the twilight of his career, however, such a trend may start to favor the Clippers as they assert themselves in the Western Conference.

Below is a comprehensive list of each games played in the Lakers/Clippers rivalry since 2010:

Clippers at Lakers since 2010

Lakers at Clippers since 2010

Where To Buy Final Four Tickets Set for April 4 and April 6 at Atlanta’s Mercedes-Benz Stadium, primary market packages for the NCAA Men’s Basketball Final Four are available via Primesport.…