Opening Day at Fenway Park will commence on Monday, April 13 when Boston welcomes the Washington Nationals. Expectations are high for Washington as Washington is the odds-on favorite to win the World Series. Despite missing the playoffs last season, Boston is favored to win the American League East. Ultimately, starting pitching will be the key to Boston’s season. Clay Buchholz is slated to start on Opening Day in Philadelphia against Cole Hamels, but Boston lacks depth behind Buchholz. Hamels has been one of Boston’s trade targets, but Hamels will square-off against his main suitor on Opening Day. Boston Red Sox tickets have an average ticket price of $129.41, 24.4% above the average price from last season.

The Yankees will start the season on April 6 when the Toronto Blue Jays head to the Bronx. Masahiro Tanaka will likely square off against former Cy Young award winner, R.A. Dickey. This Opening Day will not feature Derek Jeter for the first time in nearly two decades. New York made an effort to get younger and to improve its defense during the off-season. Alex Rodriguez will likely receive a mixed reaction when he returns to Yankee Stadium. Rodriguez is no longer the key to New York’s success, but his mere presence will keep pitchers honest. New York Yankees tickets have an average ticket price of $110.41, 2.2% above last season’s average.

San Francisco will play its first game at AT&T Park on Monday, April 13 when Colorado travels to take on the defending World Series champions. Colorado has one of the best offenses in baseball, so San Francisco’s starting pitcher must limit the damage. San Francisco lost Pablo Sandoval during the off-season, but returns the majority of its roster. Madison Bumgarner performed at a historic level during last season’s World Series run and will be tasked with leading San Francisco’s rotation. San Francisco Giants tickets have an average ticket price of $110.01, 77.4% above the 2014 average price.

Toronto will open on the road and play their first game at Rogers Centre on April 13 when the Tampa Bay Rays travel north of the border. Expectations are high for Toronto’s offense, but the onus will be on its pitching staff to perform at a high-level in a very competitive American League East. During the off-season, Toronto made an aggressive move by adding Josh Donaldson and Russell Martin. Donaldson and Martin add even more right-handed power to an already impressive line-up. Toronto Blue Jays tickets have an average ticket price of $108.69, 43% above Toronto’s average from last season.

The New York Mets are a trendy pick to improve this season and contend for a Wild Card. They will play their home opener at Citi Field on April 13 against the Philadelphia Phillies. Jacob deGrom will take the mound for the Mets in the opener, which aligns Matt Harvey to start the second game in Queens. The Mets will look to ride their young pitching staff, along with Bartolo Colon, for success this season. Mets tickets have an average price of $105.42, 42.5% above the season average in 2014. 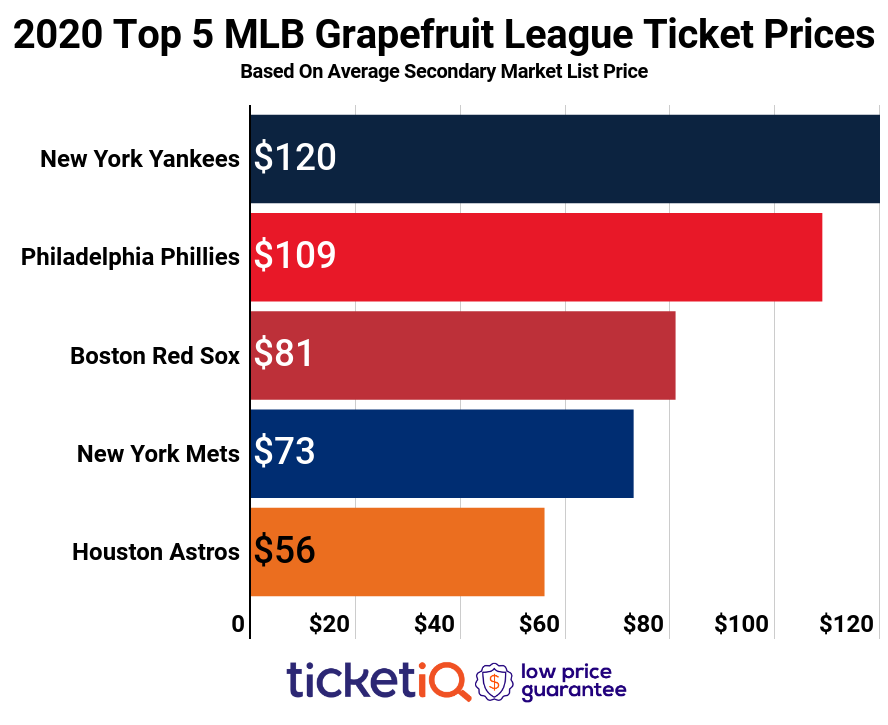 How To Find The Cheapest Spring Training Tickets + 2021 Attendance Policy

Where to Buy 2021 MLB Spring Training Tickets For teams hosting fans, primary market 2021 Spring Training tickets can be purchased on Ticketmaster or on all 30 MLB team websites.