Weird Al Yankovic riding high on the success of his 2014 release, "Mandatory Fun"

There are plenty of comedy events to look forward to this week that will include big names such as Kevin Hart, Bill Maher, Jim Gaffigan, Weird Al Yankovic, and the cast of Impractical Jokers all scheduled to perform this week.  Kevin Hart reigns supreme as the top priced comedy ticket on the secondary market for his show this Friday at the United Center in Chicago.  Here’s a breakdown of the top five comedy tickets on the secondary market on TicketIQ.

Kevin Hart’s “What Now” tour is making stop in Chicago on Wednesday to perform two shows at the United Center.  Kevin Hart tickets for Friday’s comedy event represent this week’s top priced comedy ticket at an average price of $217.31 on the secondary market, with the cheapest seat priced at $87.

Bill Maher’s “Real Time with Bill Maher” show on HBO will enter its 13th season and will air early next month, but the comedian has stand up shows lined up before then.  This Sunday, Bill Maher will be San Diego to perform a comedy show at the Humphrey’s Concerts by the Bay with secondary market Bill Maher tickets for this show going for an average price of $200.03, with a get-in price of $110.

Comedian and actor Jim Gaffigan will have busy month of August with numerous stand up shows booked, including one at the Peabody Opera House in St. Louis this Sunday.  Jim Gaffigan tickets for this event have a secondary average price of $124.54, with the cheapest seat priced at $86.

The Cast of Impractical Jokers’ “Where’s Larry” Tour will continue at the Lyrics Opera House in Baltimore this Saturday after the group wraps up their two shows in Atlantic City.  Impractical Jokers tickets for Saturday’s comedy show are going for an average price of $112.30 on the secondary market, with a get-in price of $69.

7/30/15 – Weird Al Yankovic at Capitol Theater | Avg. Price: $99.37 | Get-in Price: $39
Weird Al Yankovic is still on the road promoting his latest release “The Mandatory” as the singer will be making a stop in Port Chester, New York to perform at the Capitol Theater this Thursday.  Weird Al tickets for this show average $99.37 on the secondary market, with the cheapest seat priced at $39. 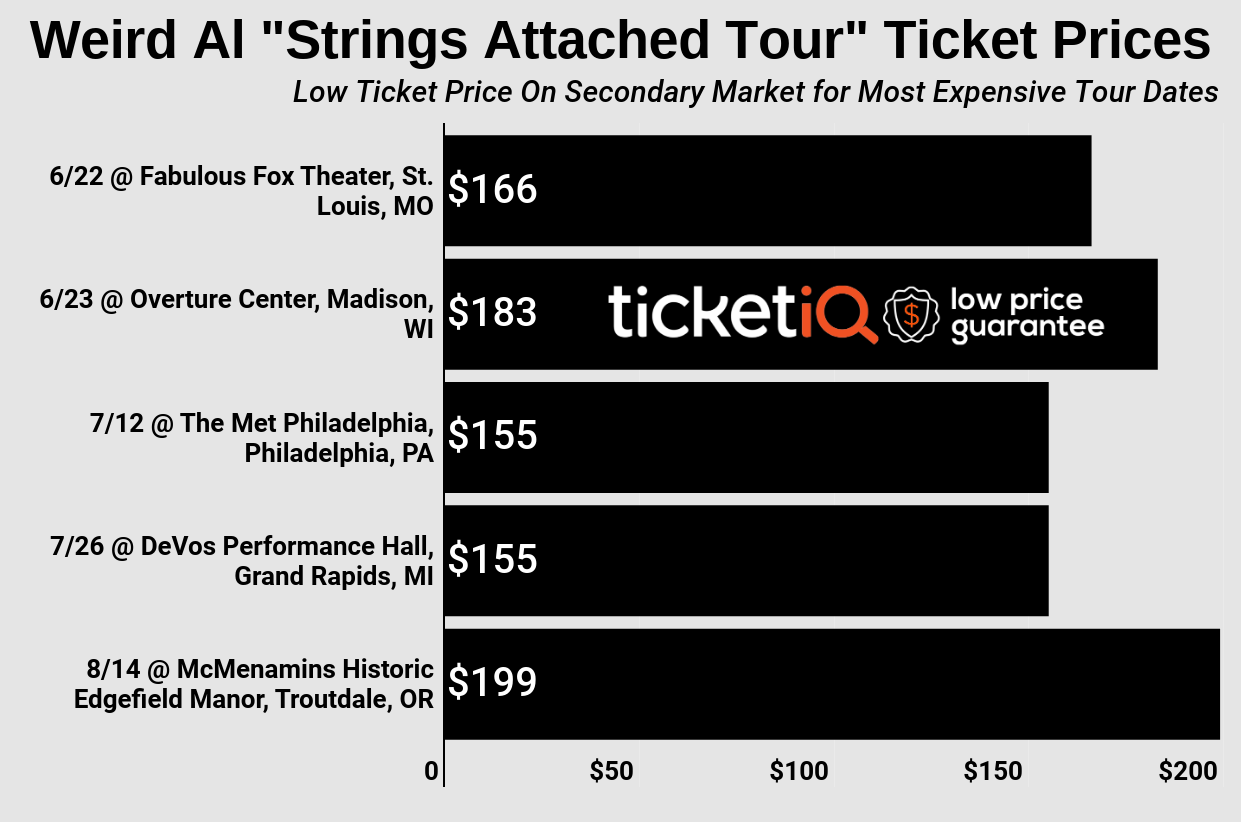