Fans never seem to tire of Weird Al Yankovic’s odd sense of humor in both comedy and song. The performer will embark on his 14th tour since 1984, when he kicks off the “Strings Attached Tour” on June 18 in Austin. The summer tour will wrap up in North Little Rock, Arkansas on September 1.

The tour will make four stops in Canada, and Seattle is the only city in which he’ll do multiple performances – a total of three between August 16-17.

On Ticketmaster, many of the higher-interest shows are 80% or more sold out on the primary market, and the July 12 show at The Met in Philadelphia is a sellout. Tickets to most shows can be had for less than $100 on the secondary market.

TicketIQ also has a Low Price Guarantee on Weird Al Yankovic tickets for every stop on the “Strings Attached Tour”, in addition to Low Price Guarantees on all concert tickets, which means that if you find a secondary market ticket for less on a site like Stubhub or Seatgeek, we’ll give you 200% of the difference in ticket credit. TicketIQ customers save an average of 5%-20% compared to Stubhub and Seatgeek. 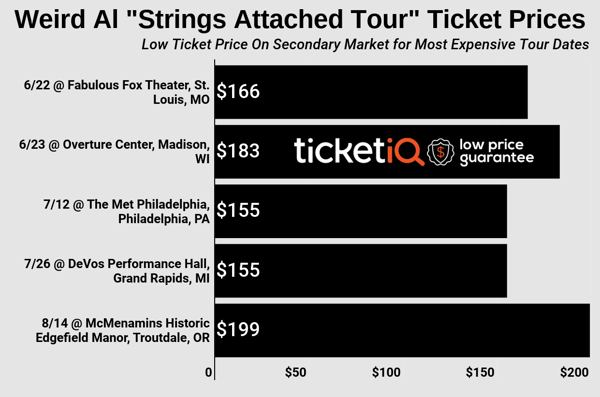 Fans should comparison shop, as TicketIQ has seats starting at $155 for the sold out Philadelphia show, and offers lots of options for the July 26 show in Grand Rapids, Michigan. For that show, there are only about 50 seats left on the primary market. starting at $175 or $289 for a VIP Package, which includes seats in the first 15 rows, a chance to meet Yankovic after the performance, a studio photo, and more.

The best value of the tour is on June 28, when fans can get a General Admission ticket at Simpsonville, South Carolina for as little as $22 on the secondary market. Primary market tickets on the lawn start at $25 via Ticketmaster, and the show is about 50% sold out.

Ticketmaster is also offering a VIP experience for the tour. The 'Strings Attached' Weird Al Meet & Greet Experience includes  One premium reserved ticket in the first 15 rows. Fans will get to me Weird Al after the show for a photo. Fans will also get a limited edition Strings Attached tour poster, a piece of orchestra sheet music used on stage during the show, and a personalized signature on an item of your choice. Click here for additional information.

Below is a look at the higher interest shows with get-in prices of $100 or more on the secondary market:

(UPDATE 2/24/16) Last year's massive 82-date tour in support of Mandatory Fun was a bold adventure for longtime funnyman Weird Al Yankovic, and the comic will repeat the cycle with another lengthy run of shows this summer. He'll trim the fat to a modest 78 shows between June and September, hitting amphitheaters and auditoriums across the U.S. during that time.

The tour kicks off on June 3 at Mahaffey Theater in St. Petersburg and runs through the country until
September 24, when it culminates at Radio City Music Hall in New York City. Notable stops along the four-month tour include BJCC in Birmingham, Fox Theatre in Atlanta, PNC Pavilion in Cincinnati and two-night stints at Hollywood Bowl in Los Angeles and Woodland Park Zoo in Seattle.

Weird Al Yankovic tickets for all summer shows go on sale this Friday, February 26 at 10 a.m. via Ticketmaster. VIP and internet presales are now available through Friday at 10 a.m.

Check out the complete tour itinerary below:

(UPDATE 5/14/15) Musical funnyman Weird Al Yankovic is currently on the road supporting Mandatory Fun, his most recent studio release. The “Inactive” singer is anything but, playing nearly 90 more shows through the end of September. Over that four-month road stint, the average price for Weird Al tickets is currently $117.56 on the secondary market.

Yankovic’s cheapest tour date will be on June 18 at Booth Amphitheatre at Regency Park, where tickets own a secondary average of $56.54 and get-in price is $44. His second cheapest gig will be on July 12 at the Flynn Center for the Performing Arts, posting a $62.09 median price and $37 low price.

It’ll be a satirical summer for Weird Al Yankovic, who on Tuesday announced plans to tour North America from May to October of this year. The Mandatory Fun World Tour will make 79 stops across the U.S. and Canada before heading to Europe for eight finals dates at the end of September and early October.

The tour will kick off at Planet Hollywood in Las Vegas on May 12 and will play five consecutive shows there before heading out to the Brady Theater in Oklahoma on May 19. Yankovic will hit major U.S. cities over the next four months, including Boston, New York, Atlanta, Chicago and St. Louis.

More dates will surely be added as the tour draws closer, and Yankovic has hinted at possible tour routing in New Zealand and Australia in the coming months. Pre-sale tickets will be available on January 27 starting at 10am local time, so make sure to check back as Mandatory Fun World Tour tickets start hitting the secondary market.

(UPDATE 3/4) Weird Al Yancovic continues to add more dates to his massive Mandatory Fun World Tour. The funnyman will play an additional seven U.S. dates in August and September, bringing his total number of shows to an impressive 94.

Newly announced tour stops include the Sandy Amphitheater in Salt Lake City, AVA Amphitheater in Arizona, Masonic in San Francisco and Folsom, California’s Harris Center of the Arts. In September, Yankovic will also hit the Gallo Center for the Arts in Modesto, California and the Greek Theatre in Los Angeles.

Below is Yankovic’s complete tour itinerary. Added dates are listed in bold.

Following a triumphant twelve months in which he scored the first US number one album of his career, pop’s premier parodist has now revealed that ‘Weird Al’ Yankovic dates will soon be announced for a North American tour.

The 55-year-old, who reached the top of the Billboard 200 with his 14th studio effort, Mandatory Fun, back in July, took to Facebook this week to announce that a series of dates will be confirmed on his official website on January 20.

The three-time Grammy winner has already released ‘Weird Al’ Yankovic tickets for four shows in 2015 including Greensburg’s Palace Theatre on May 31, Vienna’s The Filene Center at Wolf Trap National Park for the Performing Arts on June 12, Erie’s Warner Theatre on July 10 and Melbourne’s Maxwell C. King Center for the Performing Arts on August 31.

But fans will soon be able to get their hands on ‘Weird Al’ Yankovic tickets for a whole host of further performances which will no doubt feature his recent spoofs of Pharrell Williams’ “Happy,” (“Tacky”) Robin Thicke’s “Blurred Lines” (“Word Crimes”) and Iggy Azalea’s “Fancy” (“Handy”).

It will be a busy summer for Weird Al Yankovic. The singing comedian is currently in the midst of his “Mandatory Fun” World Tour, which travels across North America mid-September. According to TicketIQ, the average price for Weird Al Yankovic tickets over his remaining 67 dates is $116.41 on the secondary market.

The most expensive show Yankovic will play comes on July 8 at LeBreton Flats in Ottawa. That show owns a secondary ticket average of $246.70 and the get-in price is $198. His cheapest show will be held four days prior at BMO Harris Pavilion in Milwaukee, where tickets average at $27 and get-in price starts at just $8.

The “Mandatory Fun” Tour continues until September 19, when it wraps at the Greek Theatre in Los Angeles. Check out Yankovic’s average setlist along the tour below, per setlist.fm: