(UPDATE 5/17/16) In a basketball world headlined by the record-setting Golden State Warriors, the Cleveland Cavaliers sit waiting for their own greatness to be recognized. LeBron James and Co. have quietly breezed through the first two rounds of the 2016 NBA Playoffs, playing in the minimum eight games necessary to punch their ticket to the Eastern Conference Finals. They now face the Toronto Raptors, and while hopes of keeping the streak alive and making a second straight Finals appearance continue, fans are still receiving the best ticket deals in the league on the secondary market.

According to TicketIQ, the average resale price for Cleveland Cavaliers playoff tickets against the Raptors for all games at Quicken Loans Arena is now $351.19. That easily makes the Cavaliers the cheapest team to see at home during the Conference Finals. The Raptors are a distant second, with all games at Air Canada Centre averaging $572.87 on the secondary market.

Looking at the above graphics, the Cavaliers also own the second-best odds at winning the NBA Championship behind the Warriors, whose Game 1 loss to the Oklahoma City Thunder Monday night damaged their odds ever so slightly. With the cheapest home ticket average and second-best Championship odds at 7/5, the Cavaliers give their fans the best value in the NBA during the Conference Finals. Using this equation:

We can better understand the value each team gives its fan base during the 2016 NBA Playoffs. The lower the number, the greater the value. The below graphic illustrates our findings: 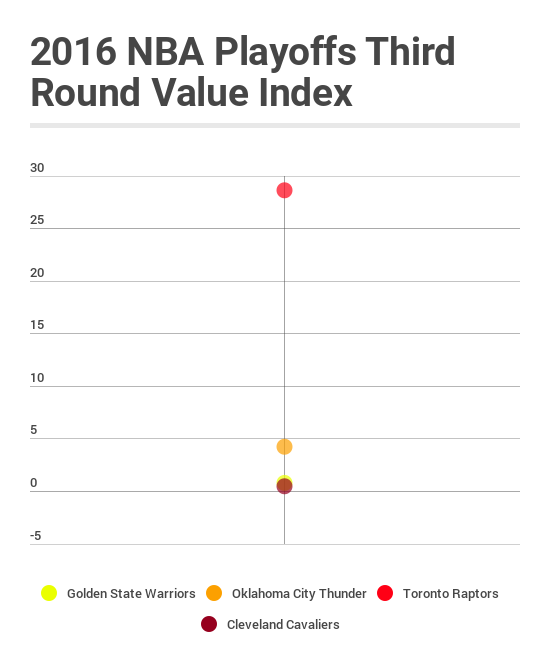 At 50/1 odds and $572.87 home average at Air Canada Centre, the Toronto Raptors give their fans the worst value in the league during the Conference Finals at 28.64 on the value index. The Thunder own the second-worst value with their 16/5 odds and $600 average ticket price for games at Chesapeake Energy Arena, giving them a 4.25 value. The Warriors still own an exceptional value at .81 despite their Game 1 loss and league-leading ticket prices, though it is the Cavaliers who own the best value at .49.

(UPDATE 5/4/16) The Golden State Warriors may be captivating the majority of headlines this postseason, but is it worth paying hundreds for 2016 NBA Playoffs tickets to see them pursue their second straight title? No price is too costly for the die-hard fan, but for those conscious of their budget, there's another team that's giving its fans the best bang for their buck through the Conference Semifinals.

Enter the Cleveland Cavaliers, whose league-low average price at home and strong odds at hoisting the Larry O'Brien Trophy this season make them the best valued team this postseason. Below is the average home resale price and Championship odds of all eight remaining teams in the playoffs, according to data provided by TicketIQ and VegasInsider:

Using the above data, we've updated our "value index" chart, which gives a finite number to each team's fan base. A value is created by multiplying the home average by Championship odds and dividing that number by 1,000. The lower the number, the better the value, and the Cavaliers own the best value at .49.

The Warriors and San Antonio Spurs trail closely behind with respective values of .52 and .54. On the opposite side of the spectrum sit the Portland Trail Blazers, Atlanta Hawks and Miami Heat, who each boast values upwards of 20 on the value index chart.

Which Team Gives Fans the Best Value During the 2016 NBA Playoffs?

From series sweeps to shocking injuries, there has been no shortage of excitement through the first two weeks of the 2016 NBA Playoffs. Fans watched as the San Antonio Spurs and Cleveland Cavaliers easily knocked out the Memphis Grizzlies and Detroit Pistons, while the sports world let out a collective gasp following Stephen Curry's knee injury against the Houston Rockets in Game 4.

What will come of the Warriors in their pursuit of a second straight title is unknown, but they depth they have will likely be able to man the ship while Curry recovers. Of course, fans who were anticipating the once and future MVP's assault on the league will be without him for at least the two weeks, which begs the question - when looking at ticket prices and Championship odds, which team gives its fans the best return on investment during the 2016 NBA Playoffs?

TicketIQ has created a "value index" for each remaining playoff team, which looks at the best deals in the playoffs from a ticketing and competitive standpoint. The equation is simple. When multiplying the home ticket average by Championship odds provided by VegasInsider and dividing that number by 1,000, each team receives a numbered "value". The lower the number, the better the deal, and it appears that the Cleveland Cavaliers give their fans the best deal in the NBA this postseason.

Cleveland Cavaliers playoff tickets on the secondary market through the first round were among the cheapest in the league at an average home price of $158.32. Using the value index model, which appears below, that number multiplied by their 3/1 odds at claiming the title this season give them a league-leading .16 value. With expectations to again represent the Eastern Conference in the Finals this season, the Cavaliers are giving their fans a considerable value both in terms of ticket prices and on-court success.

While the Cavs are giving fans plenty of reasons to be excited this postseason, it's worth noting just how closely the Warriors and San Antonio Spurs trail behind them on the value index chart. Golden State Warriors playoff tickets at Oracle Arena are far-and-away the most expensive on average during the first round, but their league-leading 7/5 odds at winning the Championship has allowed them to post a .68 value. Between the Cavs and Warriors sit the Spurs, whose .53 value gives them the second best in the league.

Of course, many teams aren't even in the same stratosphere as the three aforementioned teams. Both the Indiana Pacers and Charlotte Hornets have been able to climb back in their respective series against the Toronto Raptors and Miami Heat, but their long odds at hoisting the Larry O' Brien Trophy make them among the worst values in the 2016 NBA Playoffs. Not listed in the above graphic are the Houston Rockets, whose exorbitant $305.43 home average against the Warriors in the first round along with their 1000/1 Championship odds are the worst deal in the postseason this year.

For comparative purposes, check out where each NHL team sits on our value index during the 2016 NHL Playoffs as well.