The New York Mets are ready to take a chance on Jose Reyes, and it appears that the Queens faithful is ready to pay up to watch the reunion tour begin against the Miami Marlins Tuesday night.

According to TicketIQ the average resale price for Mets tickets to Tuesday night's game is now $114.08. That marks a a 97% increase from Monday night's average of $57.89. The cheapest ticket is currently $27, more than three times that of Monday's get-in price of $8.

Two weeks ago, the Mets announced their intent to sign the beleaguered star, who was designated for assignment by the Colorado Rockies following the completion of his 51-game suspension for violating the MLB's domestic abuse policy. The 33-year-old Reyes, whose play has noticeably declined since he left New York in 2011, was a no-risk signing for the Mets, with Colorado paying the $41.8 million still owed to him through the 2018 season. For fans with intentions of attending Tuesday's game, however, they'll be paying big prices to see him lead off and play third base at Citi Field against the Marlins.

Reyes enters a Mets clubhouse in the midst of an unusual offensive surge. The Amazin's swept the league-best Chicago Cubs in Queens over the weekend, scoring 40 runs and getting the best of All-Star locks Jake Arrieta and Jon Lester. On Monday afternoon, the Mets rallied from six runs down to defeat the Marlins, 8-6, after Matt Harvey again struggled on the hill. Reyes' impending call-up has seemed to ignite his replacement to-be in Wilmer Flores, who fought for his job with a 6-for-6, two-home-run showing against the Cubs on Sunday followed by a 1-for-3 game Monday. 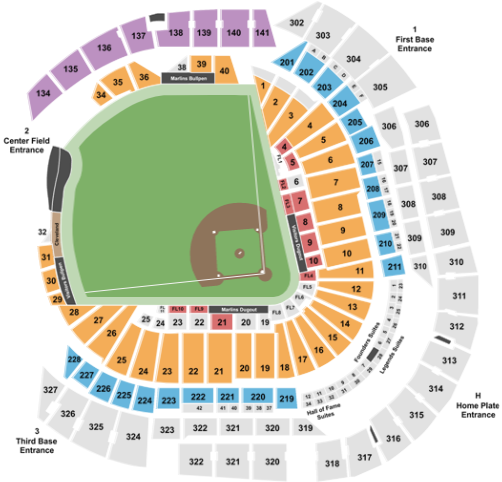 For Sold Out Seats, TicketIQ has  Fee Free tickets for all events at Marlins Ballpark including all Miami Marlins games as well as Concerts. TicketIQ customers save up to 25% compared to other…