(UPDATE 9/9/16) In the biggest upset yet at this year's U.S. Open, Serena Williams fell to Karolína Plíšková in the Women's semifinal round Thursday night. Williams' loss sent the secondary ticket market into a frenzy, with U.S. Open tickets to the Women's Final dropping more than 60% on average overnight.

This year's Women's Final now owns an average resale ticket price of $300, down 61% from Thursday's average of $762. If looking just to get past the gates at Arthur Ashe Stadium, the cheapest ticket available is now just $49, down 56% from the $112 get-in price just 24 hours ago. It is now the cheapest Women's Final since 2010, when tickets averaged just $281 on the secondary market.

Plíšková will set to face Angelique Kerber in the Women's Final Saturday afternoon. As for the Men, the semifinals begin this afternoon with Novak Djokovic taking on Gaël Monfils and Kei Nishikori facing Stan Wawrinka. Men's Final tickets on Sunday are averaging $580 and the get-in price is $129.

2016 U.S. Open Tickets Are Most Expensive in Last Seven Years

(UPDATE 8/29/16) The 2016 U.S. Open is officially underway, and ticket prices are still in big demand at the start of this year's final Grand Slam.

On TicketIQ, which provides the most trustworthy source of primary and secondary market ticket data, 2016 U.S. Open tickets at Arthur Ashe Stadium are now averaging $422.34 across all 24 sessions. That marks a 9% drop from the August 3 average of $463.57 on the resale market. Still, even with the notable drop in average price, this year's tournament is the most expensive U.S. Open since at least 2010, the year TicketIQ began tracking ticket data.

As the above graph depicts, this year's U.S. Open is the only tournament to eclipse the $400 average on the secondary market over the last seven years. The opening three sessions on Monday and Tuesday are the lone sessions to fall under a $200 average, but Session 4 on Tuesday night will be the cheapest to attend at a get-in price of $38.

Expect to pay up if hoping to attend the Men and/or Women's Final this year. As it stands now the average price for Women's Final tickets on September 10 is $843.01, making it the second most expensive Women's Final of the last seven years behind 2015's average price of $1,526.03. Looking just to get past the gates to see the two top women compete? The cheapest ticket is listed from $162.

Prices will be slightly higher on the Men's side just one night later. Men's Final tickets at the 2016 U.S. Open are averaging $939.99, good enough for second most expensive Final behind last year's $1,092.58 average.

Looking for the best deals on U.S. Open tickets this year? Make sure to download the TicketIQ app today for real-time data updates, seat views and savings on thousands of ticket listings.

Three weeks remain before the 2016 U.S. Open kicks off at Arthur Ashe Stadium, and it appears that excitement is already through the venue's newly-built retractable roof - at least in terms of ticket prices on the secondary market.

The best players in professional tennis will convene in New York between August 29 and September 11 for the 136th annual tournament, and those planning to attend an upcoming session will be paying record prices for tickets if searching on resale outlets. As of August 3, the average price for U.S. Open tickets on TicketIQ is $463.57 across all 24 sessions, making this year's tournament the most expensive since at least 2010, when TicketIQ began tracking secondary market ticket data.

This year's U.S. Open eclipses 2015's resale ticket average of $378.22, which at the time was the highest-priced ticket average recorded since the turn of the decade. The spike in ticket demand over the last two years can be largely credit to Serena Williams' pursuit of history. In 2015, she looked to become the first player to win a calendar-year Grand Slam since Steffi Graf did so in 1988, though fell short to Roberta Vinci in the Semifinal round. This year Williams is after her seventh U.S. Open women's singles title, which would break her tie with Chris Evert for most in the Open era. It would also serve as her 23rd Grand Slam singles title, surpassing Graf for most all time on the women's side.

If looking just to get in to a future session, Session 6 in the Second Round of play on August 31 is currently posting the cheapest ticket prices of the tournament. The "get-in" price, or least expensive ticket, is now $42 for that session. Only three other sessions will post ticket prices below $50 - Session 4 on August 30 ($43), Session 17 on September 6 ($46) and Session 19 on September 7 ($49).

On the men's side, Novak Djokovic is slated to return to Queens to defend his title from a year ago. Andy Murray, Rafael Nadal, 2014 champion Marin Cilic and 2009 champion Juan Martin del Potro also headline. 97 of the world's top 98 men's players will be featured in the 2016 U.S. Open, the omission being Roger Federer, who has decided to rest his left knee instead of competing this year.

Here's the Best Way to Buy Eagles Tickets in 2016 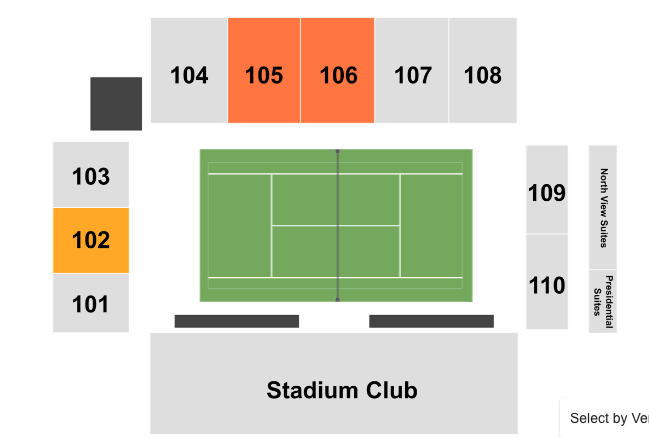