(UPDATE 8/12/17) Approximately 2 weeks out from Mayweather/McGregor, there's still over 2,000 tickets available on the secondary market. The current average asking price is $5,301 with the cheapest available ticket clocking in at $2,038.

Looking back at Mayweather/Pacquiao at the same time frame, there was just 90 tickets available with an average price of $5,268 and cheapest ticket available of $4,148.

(UPDATE 8/7/17) Over the last 40 years, boxing has had peaks of popularity, usually driven by big fights, like the “Thrilla in Manilla” between Ali and Frazier or “The Bite Fight”, in which Mike Tyson removed a piece of Evander Holyfield’s ear. Between those peaks, though, the most meaningful measure of the sports popularity may be the $675 million that the Rocky franchise has grossed domestically since opening in 1976.

To put that number into content, Rocky is the 22nd highest grossing movie franchise ever, and one of the only a handful that’s not animated or about a Superhero.  As impressive as that number is, between tickets, flights, hotels, and pay per view, this single fight is expected to bring in a direct take of over $600 million, of which tickets are one of the smallest pieces.

Of all the Rocky movies, Rocky III came closest to Mayweather-McGregor.  In the 1982 movie, Balboa faces off against Hulk Hogan, playing Wrestling champion Thunderlips. In many ways, Thunderlips versus Balboa comes closest to how many hope the August 26th might unfold. In the fight, Balboa is comically overmatched, and eventually gets thrown over ropes, only to rip off his gloves, get back in the ring, and choke out Thunderlips, riding piggyback.   While the boundaries between boxing and wrestling completely collapsed in that 1982 cinematic super fight, the plan for Mayweather Vs. McGregor is to stick to traditional boxing rules. Whether the underdog McGregor follows those rules, though, is certainly part of the intrigue.

Here's a chart showing Average Price & Get-in Price on the secondary market for each of  Mayweather & McGregor's main event PPV fights since 2013. The current average price is well above all other events including being 49% above Mayweathr/Pacquiao. However, that bout has  Mayweather/McGregor beat on "get-in price" by over $1,500. It should be noted the inventory of tickets on the secondary market was about 41% less (300 for  Mayweather/Pacquiao and 509 currently available for  Mayweather/McGregor).
Some other notes: 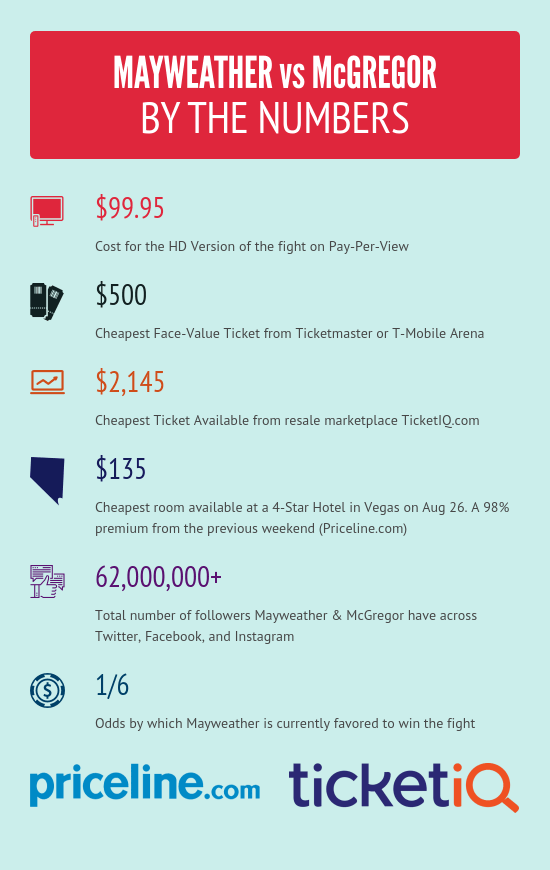 Where Does This Weekend's Bout With Liam Smith Rank Among Canelo Alvarez's Priciest Fights?

Canelo vs. Khan Tickets Averaging Over $1,000 on Secondary Market

Mayweather vs Berto Tickets Are 74% Less Expensive Than Pacquiao Fight

VIP Tables At Jay-Z's Mayweather-Pacquiao Party Will Cost $50,000 Each

PPV Price For Pacquiao-Mayweather Fight Expected to be Record $99