› Georgia Bulldogs  › As The Latest Chapter In The South's Oldest Rivalry, 2017 SEC Championship Tickets Are Most Expensive Ever

In it’s first year at Mercedes Benz Stadium, the stake for the 2017 SEC championship tickets have never been in higher demad. The 123rd edition of the South’s oldest rivalry between Auburn and the University of Georgia will likely be the most expensive ever, and certainly the most expensive in TicketIQ’s eight-year history. It’s also the most expensive conference title game this weekend....by a lot.


While the game is a rematch between the Tigers 40-17 victory at Jordan-Hare Stadium just three weeks ago, the picture has changed significantly since Auburn star running back Kerryon Johnson went down with a shoulder injury in the third quarter against Alabama. Johnson will miss the SEC championship game, and Auburn’s high-powered offense will sorely miss him. 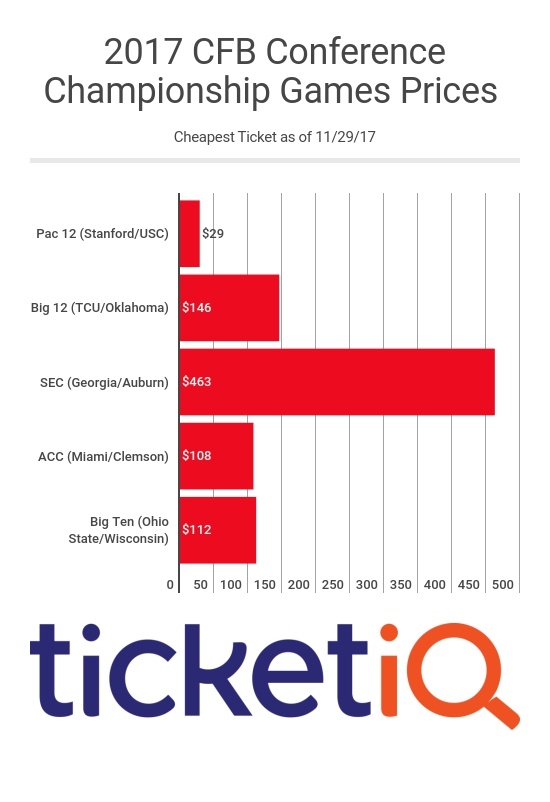 SEC Championship Tickets at Mercedes Benz Stadium
For fans interested in seeing the game live, the cheapest ticket available is currently $496 , which is almost double the price for SEC Championship tickets in 2013 game, which featured Missouri versus Auburn at Georgia Dome. While Auburn fans who saw that game have great memories of the 59-42 win that year, they’re not rushing the gates to buy tickets for the SEC championship. Five-days out from the game, 53% of the fans visiting TicketIQ are from Georgia, with only 18% from the state of Alabama. It’s fair to speculate that Johnson’s injury is playing a part in the imbalance, especially with prices as high as they are. It appears that many Auburn fans are waiting out this game and will take their chances on National Championship tickets, which currently start at $1,260 . For UGA fans, a win and a visit to their first college football playoffs, is a once in a lifetime opportunity, especially when it is literally in their backyard.

Auburn and Georgia played their first game in 1892 in Atlanta’s Piedmont Park, which is a fifteen-minute drive from Mercedes Benz Stadium. For that game, 2,000 - 3,000 people attended, and tickets cost 50 cents for adults and 25 cents for children. This year, kids will pay full price, and then some.

Regardless of of who wins, the game is sure to rank as one of the most important ever for both schools. The first in 1892 game ended with a 10-0 victory for Auburn and since then the teams have played each other 121 times, with Georgia leading the all-time series by a narrow margin of 57-56-8. A win next Saturday night might be the biggest in the rivalries history, and one that Georgia fans don’t want to miss out on.
Georgia Bulldogs mercedes benz stadium SEC Championship Game TicketIQ Auburn Tigers(football) NCAA Football

Where To Find The Cheapest 2020 SEC Championship Game Tickets