› Football  › Despite Playoff Chances, Baltimore Ravens Tickets at Lowest Point In A Decade 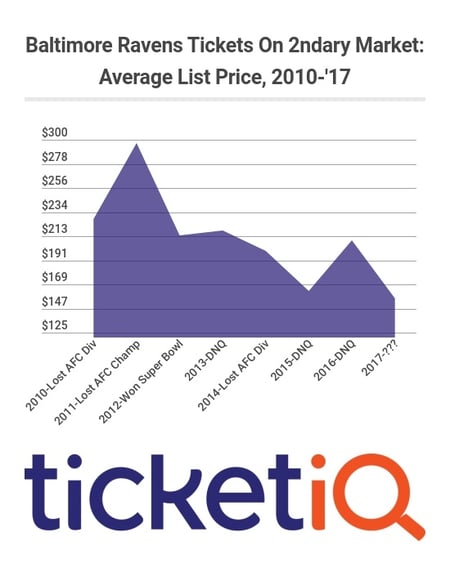 The Baltimore Ravens are on a three–game win streak, have a better than 50 percent chance of making the playoffs and are playing the Sunday night game against the against the AFC North-leading Steelers this week. Despite their somewhat surprising success, the price for Ravens tickets at M&T bank stadium is at its lowest point in the eight years that TicketIQ.com has been tracking prices.

Tickets for the final two home games currently range between $34-$592 for the Dec. 23 game against the Colts and between $26-$1,681 for the Dec. 31 game against the Bengals. A fourth-row seat behind the Ravens sideline in Section 125 can be had for $208 for the Colts game, while a 12th row seat behind the home sideline in Section 128 for the Bengals game is currently listed on TicketIQ.com for $169.

While the Ravens lack of a big star has not helped keep demand higher,  it's an opportunity for fans to see their hometown heroes for less than ever before. While much of the discussion on NFL this season has been about systemically lower demand, it seems to be market-specific as several potentially playoff-bound teams like the Chargers ($162 in 2106 vs. $282 in 2017), Chiefs ($114 vs. $179) and Lions ($145 vs. $203) have seen significant increases in prices for their tickets on the secondary market. None of those teams, however, is better than 6-6, while the Ravens enter Sunday’s game with a 7-5 record and with a win Sunday night, a path to the post-season.

How To Find Cheapest Browns Vs. Ravens Tickets in 2020

How To Find Cheapest Ravens Vs. Steelers Tickets in 2020

How To Find The Cheapest Ravens Vs. 49ers Tickets