Football and turkey are an American tradition and the NFL is offering up three Thanksgiving Day games full of intrigue this year. The Dallas Cowboys and Detroit Lions have long been Turkey Day staples and this year, both teams will reprieve their roles. But it’s the Atlanta Falcons vs. New Orleans Saints game that will steal the show – at least from a ticket-selling perspective.

Demand for that game, which pits the 9-1 Saints against the 2016 Super Bowl runners up, has pushed the average asking price on the secondary market up to $518, according to secondary ticket marketplace TicketIQ.com. That price is the second highest for a Thanksgiving Day game since 2011, when TicketIQ.com began tracking data.

The priciest Thanksgiving Day of the decade was last season’s Los Angeles Chargers at Dallas Cowboys game, which settled at $576. The third most expensive was the 2016 Washington Redskins at Cowboys game, which had an average of $508. The cheapest game of the decade was the 2017 New York Giants at Redskins game. Though the teams have a healthy rivalry, the $125 average asking price likely a function of both teams being in the midst of down years. In fact, the Giants had their worst season since finished 3-12 in 1983. 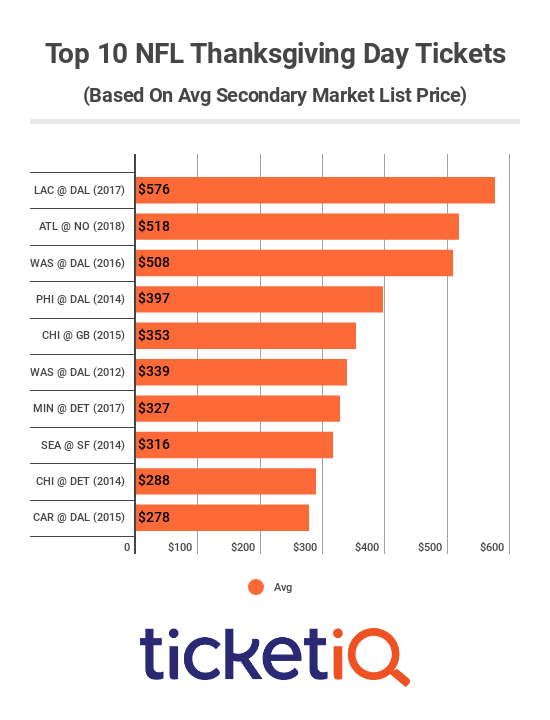 Below is a look at this year’s Thanksgiving Day matchups: 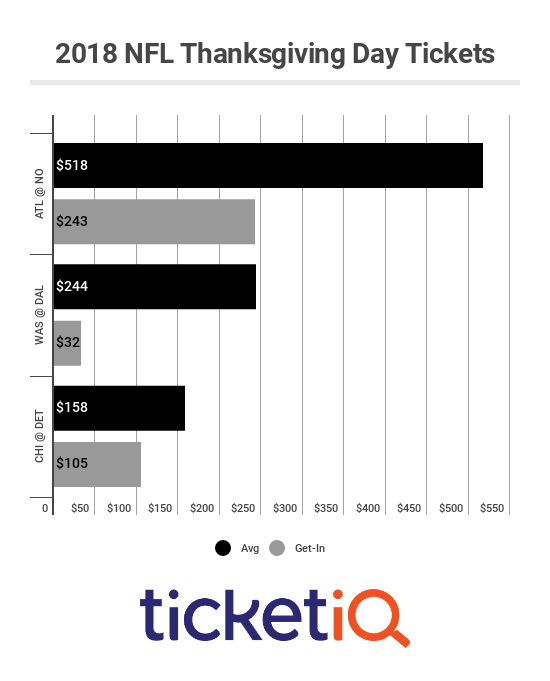 The least relevant game of the three Thanksgiving Day offerings, this game is an NFC North mismatch. The Chicago Bears enter the game at the top of the division and the hapless Lions are at the bottom. These teams have played at least once a year since 1930, and the Bears hold a 98-74-5 all-time series advantage, including a win the only time these teams met in the postseason. This is the longest running rivalry in the NFL. Both teams have had their heyday – Chicago won 11 consecutive between 1946-51 and Detroit won six consecutive twice. But this meeting will likely play out in the Bears favor. According to TicketIQ.com, the $158 average asking price is the lowest of the Thanksgiving Day games and the fifth cheapest of the decade.

Whether these teams meet on Thanksgiving Day or any other day of the year, the Redskins-Cowboys rivalry is one of the most storied in the NFL. In fact, some pundits believe it is the top all-time rivalry in the NFL. And even if it’s not No. 1, this rivalry has thrived through six decades and 117 meetings. The rivalry had an inauspicious start, but by the 1970s, it was in full swing, in part due to fan pranks and in part due to the quality of both teams – they have a combined 32 division titles and eight Super Bowls. This time around, the game pits No. 1 vs. No. 2 in the NFC East and the Cowboys need to keep their postseason hopes alive. Through Week 11, the Redskins are 6-4, and the Cowboys 5-5. When the teams played at Washington earlier this season, the Redskins won, 20-17. The $244 average asking price is the second highest of the Thanksgiving Day games, and the $32 get-in price is the cheapest, according to TicketIQ.com.

The most intense rivalry in the South, expect this game to be the marquis matchup of Thanksgiving Day. Through Week 11, the Saints were one of only three one-loss teams (Los Angeles Rams, Kansas City Chiefs) in the NFL, and were atop the NFC South. The Falcons, two years removed from their last Super Bowl appearance, were 4-6, but don’t let the records fool you. The Falcons hold a 52-47 all-time series advantage, but the Saints have won the last two consecutive, including a 43-37 overtime win on Sept. 23 in Atlanta. The rivalry is full of storied names in the NFL – Morten Andersen and Jim Mora (the father and the son) among them. The $518 average asking price and $243 get-in price are the highest of the Turkey Day games, according to TicketIQ.com.

Where To Buy 2022 Atlanta Falcons Tickets  Primary market face-value tickets generally go on sale shortly after the NFL schedule is released. This year, the schedule is being released on Thursday,…

How To Find Cheap 2022 Dallas Cowboys Tickets + On Sale Info

How To Find The Cheapest New Orleans Saints Playoff Tickets

How To Find The Cheapest Bears Vs. Cowboys Tickets on 12/5/19

How To Find The Cheapest Saints Vs. Panthers Tickets

How To Find The Cheapest Lions Vs. Cowboys Tickets + Face Value Options

Where To Find Cheapest 2019 Cowboys Vs. Lions Tickets at Ford Field

Dolphins-Patriots Is Most Expensive Week 17 Game On Secondary Market