Childish Gambino, aka Donald Glover, announced a surprise tour today. The rapper, actor and comedian had previously planned to table his hip-hop persona, but after signing a new deal with RCA Records, according the Consequence of Sound, he’s back on tour. 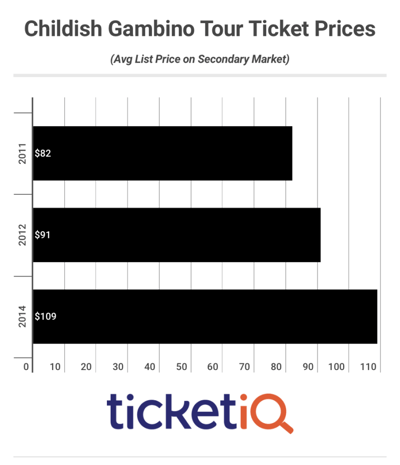 The 13-date tour includes stops at large arenas in major cities in the U.S., Toronto and Vancouver. Among the venues are Madison Square Garden, Boston’s TD Garden, Chicago’s United Center and Dallas’ American Airlines Center, all of which seat at least 19,500. The United Center has a seating capacity of 23,500.

According to TicketIQ.com, Childish Gambino has seen a steady rise in the price of concert tickets. When he first started touring in 2011, Glover commanded $82 per date on the secondary market. By 2014, his third tour, that price has moved up to $109. And last summer, it cost $522 to see Glover play at Radio City Music Hall with Dave Chappelle.

In addition to the tour dates, Childish Gambino will perform his multi-sensory “Pharos” in New Zealand, Nov. 23-25. The show, which debuted at Joshua Tree in 2016, unreleased music, a jam session and visual treats. It is designed more as an experience than a concert show. According to multiple media reports, it is an intimate event with no firm schedule, just an artist following his muse.

Glover has released studio albums, but may be better known for his film work. He has a dozen film credits, and will be the voice of Simba in Disney’s 2019 release of “The Lion King.” He is currently working on “Solo: A Star Wars Story,” which will be released later this year and debuted the Aaron Davis character in the Spider-Man film series last year in “Spider-Man: Homecoming.”

Tickets for Glover’s tour go on sale on Friday March 9.