Marilyn Manson and Rob Zombie apparently had so much fun on their 2012 “Twins of Evil Tour” that they’re doing it again. Six years after that tour, the pair announced a two-month, 26-date North American tour earlier this month. The tour, titled “TWINS OF EVIL: The Second Coming Tour 2018,” kicks off July 11 in Detroit and winds up on Aug. 29 in Irvine, Calif. The venues are mostly medium-sized and the tour will visit cities both big (Detroit, Atlanta, Las Vegas) and small (Noblesville, Ind., Darien Lake, NY, Concord, Calif.). The tour features three consecutive stops in Texas Aug. 16-18 (Dallas, Austin and the Woodlands) and three venues in Southern California – Chula Vista on Aug. 24, Concord on Aug. 28 and Irvine on Aug. 29.

Manson and Zombie, both hard rockers with their own followings, albums and styles, commanded $121 per ticket on the secondary market for the original “Twins of Evil Tour,” according to data provided by TicketIQ.com. Manson is currently on his “Heaven Upside Down Tour,” for which fans are paying an average of $127 on the secondary market. That tour ends with a European stint May 30-June 30, giving Manson about two weeks before joining Zombie for their tour.

Zombie completed his last tour – which spanned more than two years – in November. According to TicketIQ.com, fans paid an average of $87 per ticket to see him perform.

Tickets for the upcoming co-headlining tour go on sale in late March.

Manson, who derived his stage name by combining Marilyn Monroe and Charles Manson, was the lead singer of the 1990s hard rock band of the same name. The band had three platinum and three gold albums and two No. 1 hits. Zombie, who was the lead singer of White Zombie, released four studio albums with his band before spinning off on his own. He went on to sell more than 3 million copies of his first solo album and to work as a horror film director. 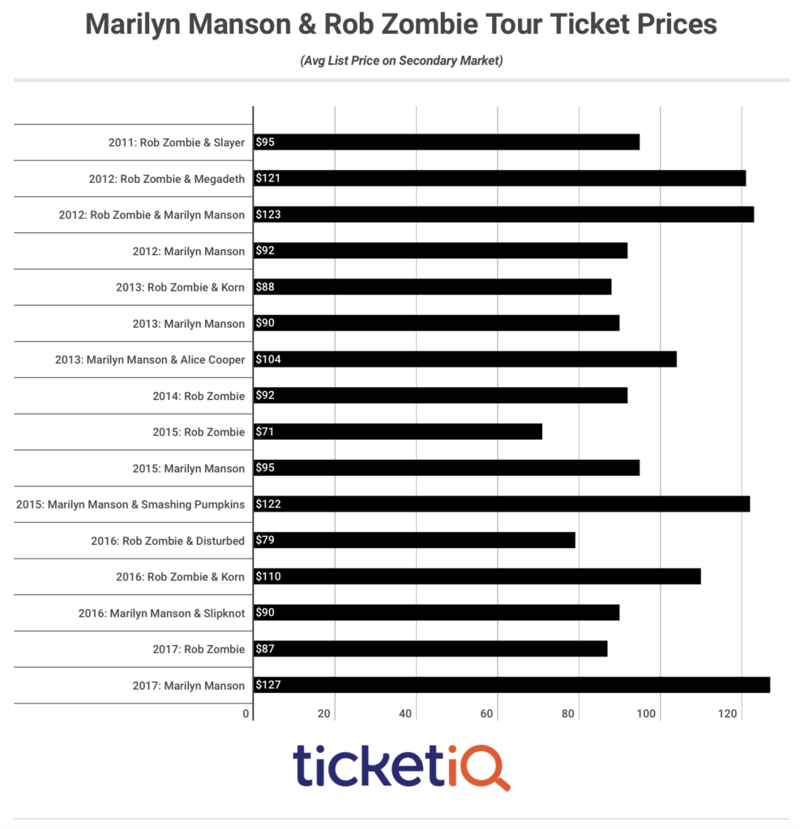 Could Live Nation's Ticket to Rock Be the Best New Way to Save at the Local Box Office This Summer?

Among Several Reunions, Linkin Park and System of a Down Highlight 2015 Amnesia Rockfest