Highlighted by their singing of Japanese superstar, Shohei Ohtani, the Los Angeles Angels are coming off of a very strong offseason, and by the looks of secondary market Angels ticket prices, fans can't wait for the season to begin. 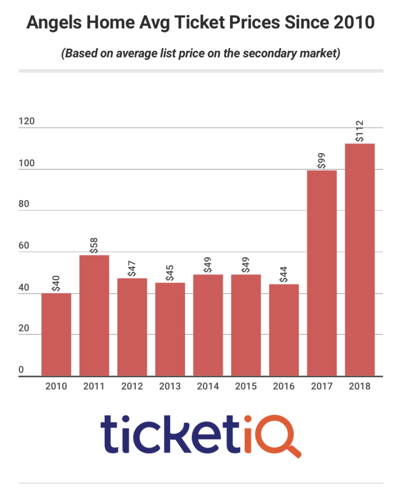 Opening Day tickets tell a similar story. It will cost fans an average of $153 to see the Angels host the Cleveland Indians on April 2 in Anaheim. The Angels open the season on the road at the Oakland Athletics on March 29.

Opening Day at Angel Stadium features the Angels first promotion of the season – the team will give away Angels wall calendars.

For Sold Out Seats and Events, TicketIQ has Fee Free tickets for all events at Angel Stadium for the Los Angeles Angels games as well as Concerts. TicketIQ customers save up to 25% compared to…