The Big3 basketball league is set to begin its third season this week. The average asking price for a ticket on the secondary market is $110 compared to $84 last year and $109 when the league debuted. Unsold face value tickets are available for most cities via Ticketmaster, with more expensive tickets sold out in a several markets. As a result, it's important to look for face price tickets as well as sold out secondary market tickets. The most expensive ticket on the secondary market is for the championship game at the Staples Center. Below are the cheapest tickets at each of the venues on the Secondary ticket market. 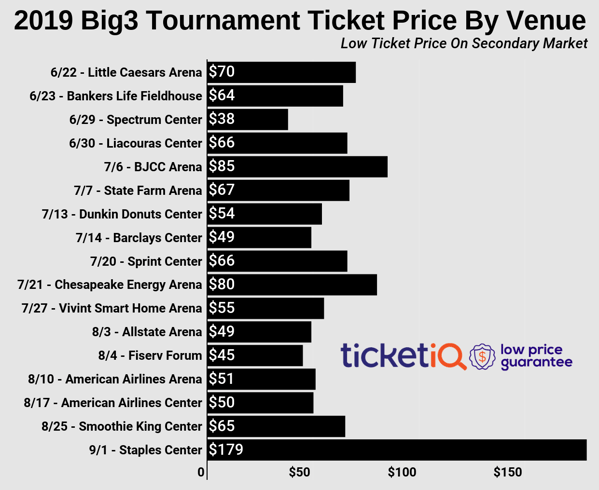 As the above image shows, most cities have tickets on the secondary ticket market starting around $50. TicketIQ also has low price guarantees on all sports tickets, which means that if you find a secondary market ticket for less on a site like Stubhub or Seatgeek, we’ll give you 200% of the difference in ticket credit. TicketIQ customers save up to 25% compared to Stubhub and Vivid Seats.  For fans looking to go big for the Big3, courtside seats have a face price of $1,000, but are available only on Ticketmaster.  Download the TicketIQ app for $20 off your first ticket purchase 📲 🎟️

Big3, a 3-on-3 basketball league featuring retired NBA players, opens tonight at Houston’s Toyota Center. For the season, tickets across the board are cheaper on the primary market. The BIG3 recently expanded from eight teams to 12 teams for the 2019 season. The league has also added former NBA stars such as Gilbert Arenas, Lamar Odom, Greg Oden and Kendrick Perkins to the talent pool for its third season. According to a press release issued, the league will be getting serious TV exposure: "During the upcoming 11-week BIG3 season, games will air live on CBS Television Network and CBS Sports Network on both Saturdays and Sundays, with a champion crowned live on CBS on Sunday, September 1. CBS Television Network will broadcast more than 20 hours throughout the season, with CBS Sports Network set to televise more than 25 hours of additional live game coverage."

Below are Big3 rules for anyone considering checking it out.

How To Get The Cheapest Tickets For Hozier: Wasteland, Baby! Tour