The U.S. Open, held at the USTA’s Billie Jean King National Tennis Center in Flushing, New York, is the premiere tennis tournament in the United States, and the last of four Grand Slam events around the world. In 2023 the event will take place from August 28th to September 10th.

Where To Buy US Open Tennis Tickets

Primary market face-value tickets for the 2023 US Open will be available via Ticketmaster.

HOW MUCH DO US OPEN TICKETS COST 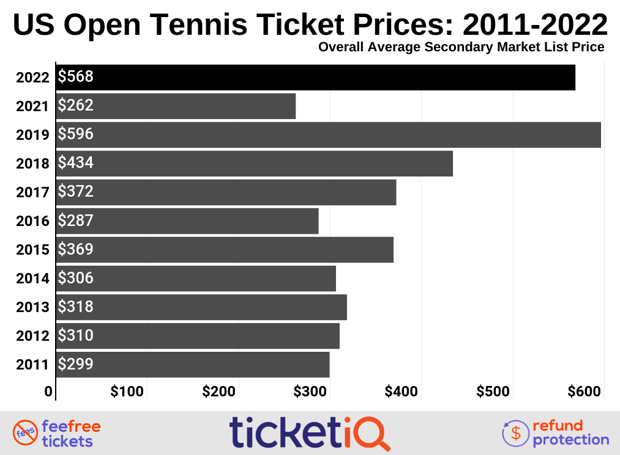 As you can see above, the overall average list price on the secondary market for the 2022 US Open is $568, which is 117% more expensive than last year's tournament when many of the sports top stars withdrew from the competition (Roger Federer, Dominic Thiem, Stan Wawrinka, Sofia Kenin, Rafael Nadal, Milos Raonic, Serena Williams, Venus Williams).

That average price is also up 87% since Serena's announcement in early August that she would be retiring after the tournament.

HOW MUCH ARE MEN'S AND WOMEN'S US OPEN FINALS TICKETS

Prices for this year's Women's Final have also increased in recent days, with the average price jumping 53% since the start of the tournament to $1,972, which is more than double the next most expensive final in 2019, the last time Serena reached the finals. 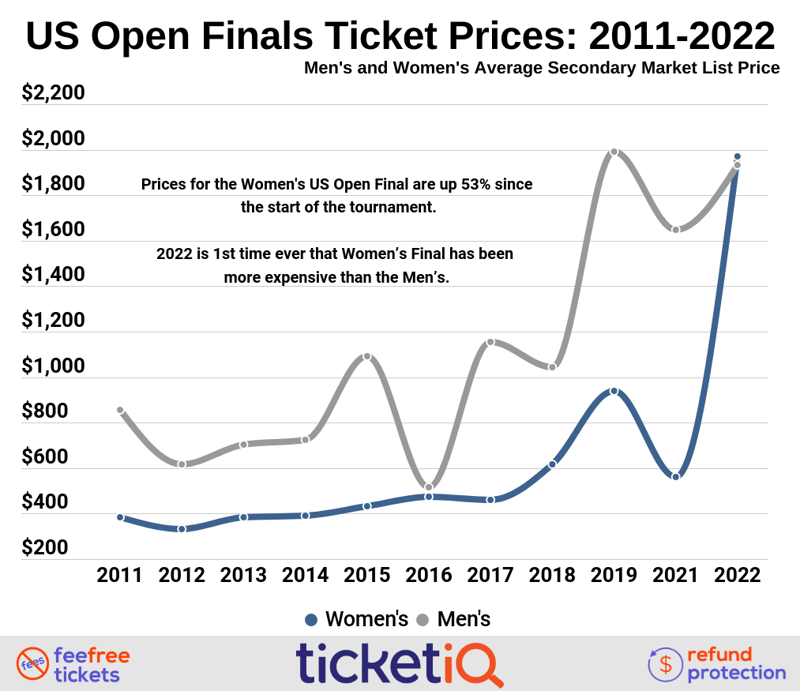 HOW MUCH ARE US OPEN GROUNDS PASSES

Grounds passes are sold for the first 8 days of the tournament, and are GA passes to Louis Armstrong Stadium, the Grandstand and all of the field courts. Seating is first-come first-serve. These are the most affordable way to get to the Open.

DO US OPEN TICKETS SELL OUT

Tickets for the early rounds--first through the round of 16--of the US Open generally do not sell out. As the tournament gets into the later rounds, primary market inventory becomes more and more limited, and tickets for the quarterfinals, semifinals, and finals usually always sell out.

That said, resale marketplaces like TicketIQ will always have tickets available, even right up until the session begins, and sometimes even cheaper than the primary market.

Individual tickets went on sale to the general public on June 3 through the U.S. Open website, and fans can sign up here for the “US Open Insider,” which will keep fans apprised of ticket dates. American Express presale tickets were made available between May 28-June 1.

There is an eight ticket limit for Arthur Ashe Stadium individual sessions (day or night), any Louis Armstrong sessions, and grounds tickets per session. There is a limit of 16 tickets for the total number of Arthur Ashe Stadium sessions (day or night sessions), total number of Louis Armstrong tickets and grounds tickets in total.

The U.S. Open offered multiple ticket plans, some of which include access to specific courts, but all of which are sold out.

Fans have a choice of buying the full series, which includes 15 sessions, including six evening sessions, or a day sessions package, which includes nine sessions. For both packages, fans get first-come, first-serve access to the grandstand and all outer courts. Both packages are good for the duration of the tournament, August 26-September 3.

The main court at the U.S. Open offers a variety of packages:

For fans wanting a taste of the action at a lower price, the grandstand ticket package offers reserved seating in the grandstand for all day sessions during the eight days of matches in the Grandstand Stadium.

Valid September 6-11 this ticket package includes the quarterfinals, semifinals and finals – a total of eight sessions. Championship week is a key time for spotting celebrities while fans enjoy the most in-demand sessions of the U.S. Open.