On the secondary market, TicketIQ has Fee-Free Green Bay Packers tickets which also include a Refund Guarantee. Our Refund Guarantee states that if an event is canceled or deemed unfit for fans to attend, TicketIQ will refund ticket buyers in as soon as 15 days. That means that you can buy from TicketIQ worry-free. Customers on TicketIQ save between 15%-25% compared to other secondary market ticketing sites.

Green Bay has been sold out for season tickets since 1960, but the team does have a waiting list  that fans can join — either for tickets in the stadium bowl or for Club seats — by filling out a form and mailing it to the team.

Club Seats are available only a season-ticket basis. In the past, Club ticket holders have gotten invitations to special events, pre-game sideline passes, access to premium food and beverage, and access to mini camps and training camp.

The team also has suites available for single games, partial-game packages or on a multi-year basis.

The Packers issue digital tickets for all tickets sold on the secondary market, through the Brown County Drawing and group sales. Ticket holders can download the Packers app through Google Play or the App Store, and may use the app for entry into Lambeau Field or to buy, sell or transfer tickets. Season ticket holders will be issued hard-copy tickets.

The Green Bay Packers will operate at full capacity for the 2021 NFL season.

These have not been announced for the 2021 season, but these were the health and safety protocols last season when the team hosted fans:

The Packers issue digital tickets for all tickets sold on the secondary market, through the Brown County Drawing and group sales. Ticket holders can download the Packers app through Google Play or the App Store, and may use the app for entry into Lambeau Field or to buy, sell or transfer tickets. Season ticket holders will be issued hard-copy tickets.

UPDATE 8/7: It was announced today that the Packers will not host fans at Lambeau Field for the first two home games this season.

On July 21st, the Green Bay Packers announced that if fans are allowed at Lambeau Field this season, it will likely be at a reduced capacity. They also laid out the following safety protocol for fans attending games:

(UPDATE 7/28) The Packers announced that if fans are allowed at Lambeau Field this season attendance will be limited to 12,000.

How Much Are 2020 Green Bay Packers Tickets

The $442 average asking price for the defending NFC North champion Green Bay Packers is up 28% on the secondary market over 2019, according to TicketIQ. A Packers ticket is the 11th priciest in the NFL, and above the league average of $390.  The most expensive team is the Raiders, who have an average asking price of $1,098.

How Much Are 2019 Packers Tickets 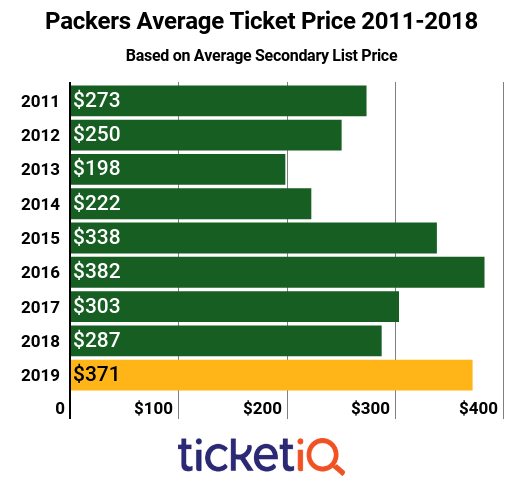 The Green Bay Packers start the regular season with a bang on Sunday, hosting regional rivals Chicago. Below is how Packers tickets prices stack up on the secondary market across the league. As you can see below, Packers tickets are down 5%, but even with the drop, are the fourth most expensive since 2011, and the 7th most expensive in the NFL this season. The most expensive average price for a second for the Packers this decade was in 2016, when the Packers won the NFC North and got all the way the conference championship before losing to Atlanta. 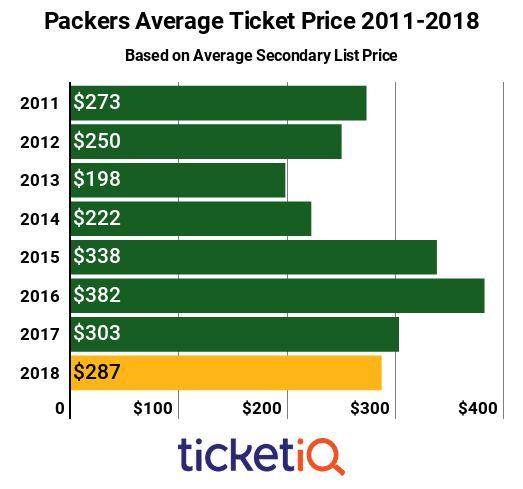 Where to Buy 2018 Packers Tickets:

Though tickets are cheaper than they were last season, Packers tickets are the No. 7 most expensive in the NFL. Tickets to Packers games are always a challenge – the team has long been sold out of season tickets and the waiting list is reportedly more than 100,000 people and 30 years long. According to the Packers website, the team has been sold out since 1960, but fans can get on the waiting list here.  Standing-room only and seats in the far upper decks are available in very limited quantity for most games through Ticketmaster, the team’s primary market vendor. On the secondary market, the average asking price this season is $287, and seated tickets are available for all games through secondary ticket marketplace TicketIQ.com.

Prices For Each Game on 2018 Packers Schedule:

No surprise the most expensive game of the season will be the September 16 Minnesota Vikings game. The longtime rivals are less than a five-hour drive away, and fans from both teams relish this meeting. The average asking price on the secondary market for the Vikings game is $481 and, there are no primary market seats available. Thought it’s an early season game, prices could rise as fans begin catch NFL fever. 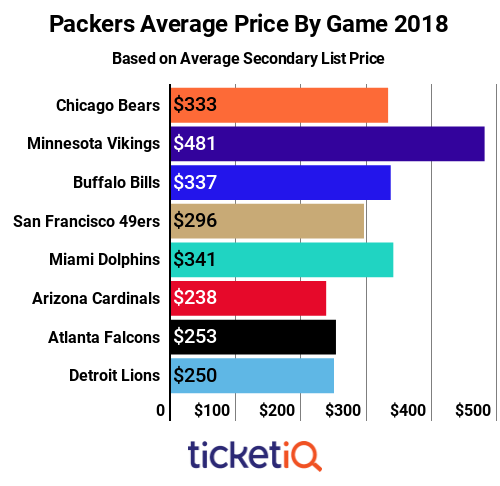