Halfway through the Major League Baseball season, teams are learning that winning pays … and losing doesn’t. The Tampa Bay Rays, sitting in second place in the American League East and with the fourth-best record in the AL, have had the biggest jump in price from the start of the season — the Colorado Rockies had a 19.6% increase, on secondary ticket marketplace TicketIQ. The Washington Nationals had the second highest, with a 18.3% increase.

All three teams are having better seasons than projected. Rounding out the teams with the top five increases over the first half are the San Diego Padres with a 15.4% jump, the Minnesota Twins with a 7.5% jump and the Los Angeles Angels with a jump of 7.4%. The Padres were at .500 at the All-Star break for the first time in nine years. 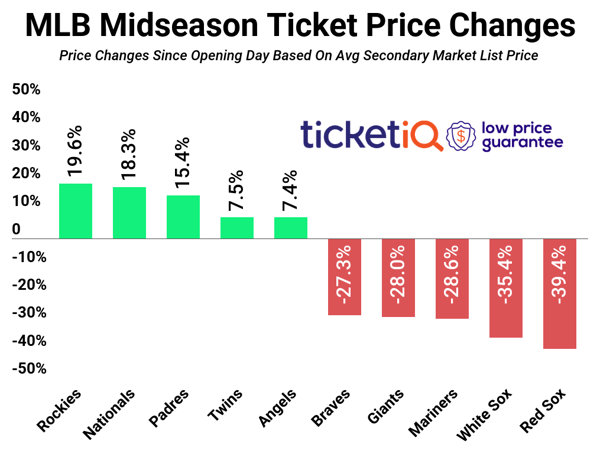 TicketIQ has a Low Price Guarantee on MLB tickets for all games on the 2019 schedule, which means that if you find a secondary market ticket for less on a site like Stubhub or Seatgeek, we’ll give you 200% of the difference in ticket credit. TicketIQ customers save an average of 5%-20% compared to Stubhub and Seatgeek.

On the downside, the average asking price for the defending World Series champion Boston Red Sox, who are sitting third in the AL East, plummeted. Boston started the season with a $155 average asking price, the highest across MLB, but halfway through, fans are paying an average of $94 on the secondary market. The 39.4% drop is the biggest in baseball.

That drop translates into a great opportunity for fans to catch a game at the perennially sold-out Fenway Park, one of only two pre-1920s ballparks still in use.

The Chicago White Sox, who are third in the AL Central but have a losing record, had the second-biggest drop, from an $82 average asking price at the start of the season to $53 by the midway point. The Seattle Mariners with a 28.6% drop, San Francisco Giants with a 28% drop and the Atlanta Braves with a 27.3% drop round out the teams with top five biggest price drops.

The Los Angeles Dodgers — runners-up in last season’s World Series and owners of the best record in baseball — are bucking the trend. The average asking price for a ticket to see the Dodgers, who had won 60 games through July 12, dropped 15.2% percent from $132 to $112. In the AL, the New York Yankees have the best record and lead the East, but secondary market prices also dropped, from $133 to $121.

Beginning of season report is below

You’d think winning a World Series would drive up ticket prices, but in the case of the Boston Red Sox, the average asking price on the secondary market is 8% lower than in 2018, according to secondary ticket marketplace TicketIQ.com. But even with the decline, the Red Sox’s $155 average asking price is the highest in Major League Baseball. In October, the Red Sox won their fourth World Series since 2004, when they snapped an 86-year-old drought. The next priciest ticket on the secondary market is $141 for the Chicago Cubs, who snapped their 108-year drought in 2016. And that average is, yep, you guessed it, cheaper than last year. The New York Yankees, Los Angeles Dodgers and St. Louis Cardinals round out the top 5. Three of the teams with the Top 5 priciest tickets had declines in ticket prices from 2018 to 2019.

The cheapest ticket in the Major Leagues is even cheaper than it was last year, according to TicketIQ.com. The average asking price for a Tampa Bay Rays ticket dropped 23% from $52 to $42, making it the cheapest ticket by $2. The next least expensive ticket is $44 for a seat to see the Mets at Citi Field. where tickets fell 62% between 2018 and 2019. Only one other team has an average asking price below $50 – $48 for the a chance to see the Cincinnati Reds. The San Diego Padres (even with Manny Machado) and the Miami Marlins are the other two teams in the bottom 5.

There’s plenty of hype surrounding the Chicago White Sox--which may die down a bit with Manny Machado off  the board--but up until now it has driven the average asking price for a ticket up more than 33% to $82, good enough to be the eighth priciest ticket in MLB. Chicago fans clearly think that avoiding arbitration with superstar Jose Abreu and adding first baseman Yonder Alonso could be enough to put the White Sox into contention. Demand in Milwaukee for the Brewers, which won the NL Central and got to within a game of the World Series in 2018, is up just over 31% to a $74 average asking price. Rounding out the top five biggest price gainers are St. Louis, up nearly 21% to a $104 average; the Philadelphia Phillies, thanks to their recent acquisition of Bryce Harper, also up just under 21%. and the Colorado Rockies, up nearly 19% to $56.

A year after a massive increase average asking price, Los Angeles Angels fans are clearly feeling the disappointment of long-time manager Mike Scioscia’s retirement. The average asking price for a ticket to Angels Stadium is down a whopping 77% to $54 from $96. The next biggest dip is less than half that. The Mets have the 29th most expensive ticket after a drop of nearly 62% to $44 while San Diego fans appear to have also thrown in the towel before the start of the season. The average asking price for a seat at Petco Park is $51, down just over 55%. But with the recent signing of superstar Manny Machado, prices could begin to trend up in the coming days and weeks The Cincinnati Reds and Los Angeles Dodgers round out the five biggest price drops, at declines of 33% and 31%, respectively. Dodgers fans are clearly still feeling the sting of a second consecutive World Series defeat.

In terms of “cost per win,” the best deal in the league will be at Tampa, where the cost per win is 50 cents. Tickets are cheap, even though the Rays are projected to win more than 84 games. So if you’re in the neighborhood, it’s a great opportunity to see your team on the road. Other teams that based on their win total vs their secondary market average price that will be providing their teams with great deals are  the New York Mets, Cincinnati Reds, Minnesota Twins, and the Los Angeles Angels.

At the other end of the spectrum, the priciest teams are also the teams that are the worst value in terms of "team value index." For example, the team with the highest “cost per win” is the Boston Red Sox, meaning fans will pay a premium for a seat at Fenway. The Chicago Cubs, Los Angeles Dodgers, New York Yankees and Seattle Mariners round out the Top 5 highest team value index. Of the five, Seattle is really the worst deal of the top five as they're projected to win only 70.5 games, but average asking prices are high. 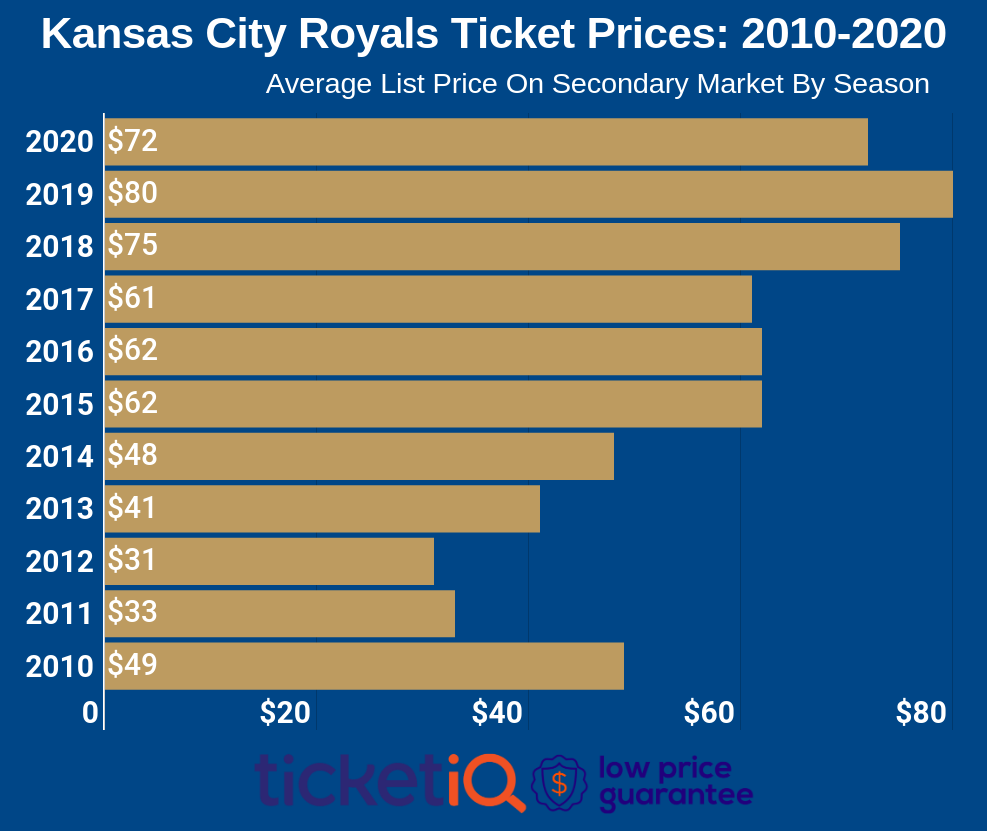 Where To Find The Cheapest Tampa Bay Rays Playoff Tickets

Where To Find The Cheapest Milwaukee Brewers Playoff Tickets

Where To Find The Cheapest Washington Nationals World Series Tickets

Royals World Series Tickets Up Over 3% For Game 2

Win $50 In Ticket Credit Towards Any Reds Game