With the advent of the College Football Playoff and the proliferation of bowl games, New Year’s Day isn’t quite what it used to be in terms of college football. Gone is the New Year’s Day Six – the Cotton, Fiesta, Orange, Peach, Rose and Sugar bowls – and in is a rotation that moves some of those games to fit the CFP schedule. This year, the Orange and Cotton bowls will host national semifinals and will be played on December 29.

Five bowl games will be played on New Year’s Day 2019 – the Citrus, Fiesta, Outback, Rose and Sugar bowls. The Rose Bowl, which features Washington vs. Ohio State, remains king, commanding a current average asking price of $439, making it the highest priced of all the New Year’s Day games, according to secondary ticket marketplace TicketIQ.com.

Get out the chicken wings and beer. Below is a look at the this year’s five New Year’s Day college football bowl games: 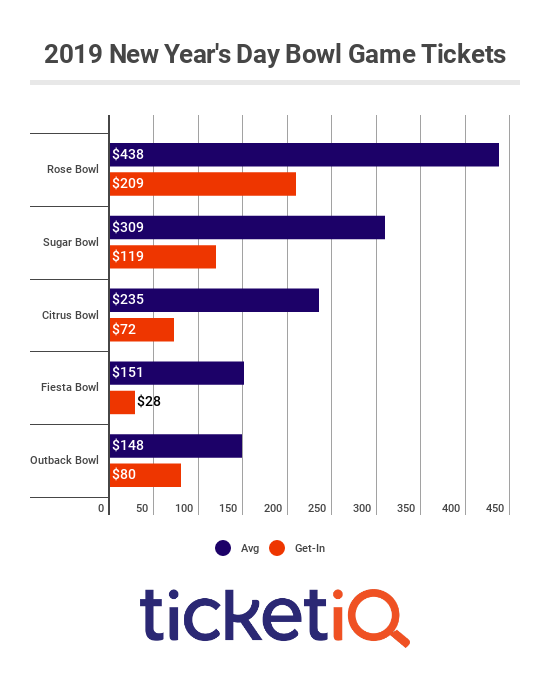 Formerly the Tangerine Bowl, the Citrus Bowl is not in the CFP rotation, but has traditionally had the biggest payout for a non-CFP bowl game. The bowl, which dates to 1947, and has tie-ins with the SEC and Big Ten, gets the first selection after the CFP bowls from those conferences. The $235 average asking price is the third highest of all the New Year’s Day games, according to secondary ticket marketplace TicketIQ.com. The average asking price is the highest since 2010, when TicketIQ began tracking data. The cheapest games cost $91 when Georgia played Nebraska in 2013 and Missouri played Minnesota in 2015. Penn State and Kentucky last met in the Outback Bowl in 1999 and the Nittany Lions have a 3-2 all-series advantage. 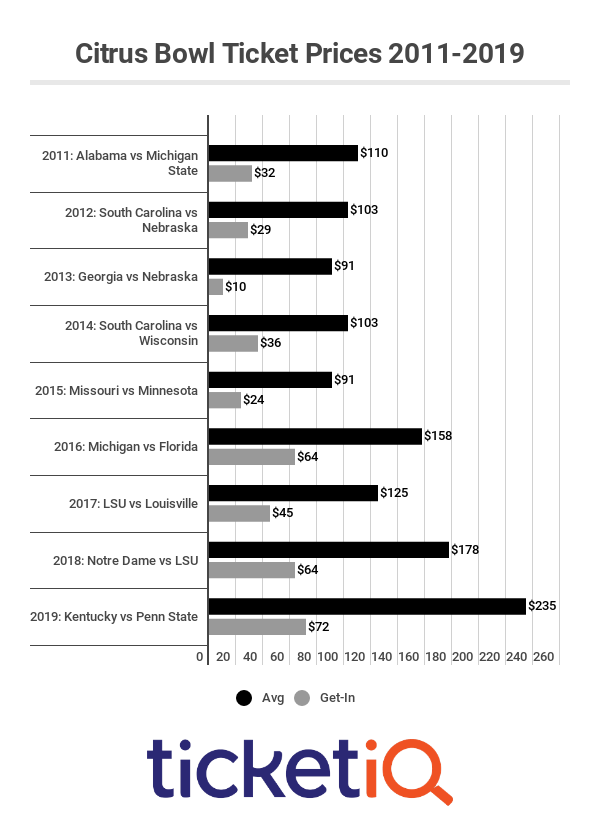 The Fiesta Bowl has been part of the national championship rotation since 1998, and last hosted a CFP semifinal in 2016, when Ohio State played Clemson. The Fiesta Bowl dates to 1971 and was originally played at ASU’s Sun Devil Stadium. The game is now played at State Farm Stadium in Phoenix. The $151 average asking price is the cheapest of this year’s New Year’s Day games, and is the fourth cheapest Fiesta Bowl 2010, according to TicketIQ.com. The most expensive Fiesta Bowl of the decade cost fans $296 on the secondary market to see Oregon play Kansas State in 2013. This game has no conference tie-ins and in a non-CFP year, generally invites two ranked teams. This game will be the first time in history that that UCF and LSU have played each other. 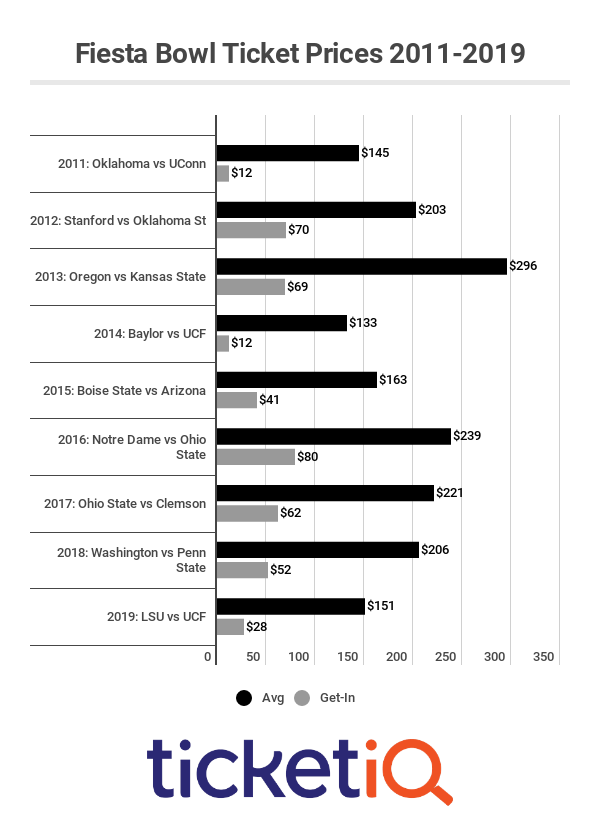 Originally the Hall of Fame Bowl, the game’s name changed in 1995. The Outback Bowl started in 1986 and has conference tie-ins with the Big Ten and the SEC, though it gets the third pick of teams from those conferences after CFP teams are selected. The $148 average asking price is the cheapest of this year’s New Year’s Day games. The priciest game was the 2016 Tennessee-Northwestern matchup, which settled at $226, and the cheapest was the 2010 Northwestern-Auburn matchup, for which fans paid an average of $109. Mississippi State and Iowa have never played each other in football. 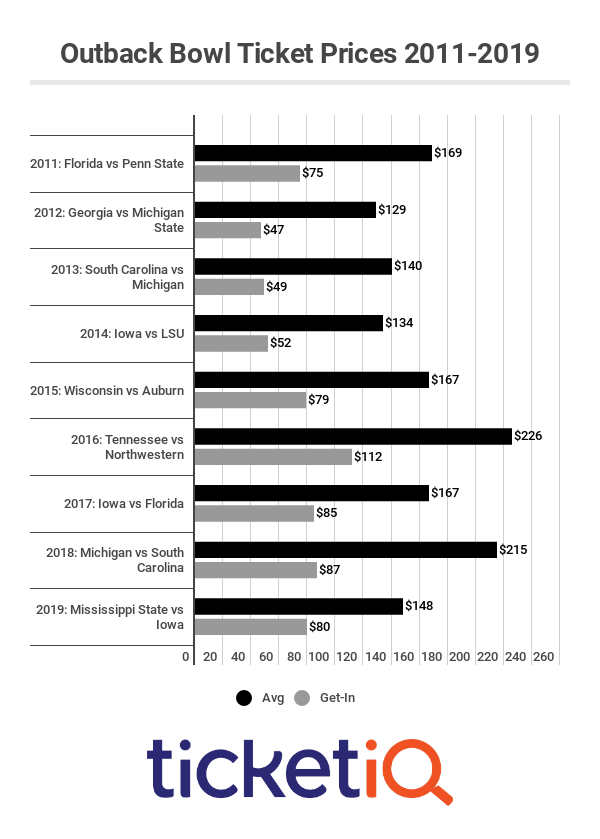 This Rose Bowl is the only one of the New Year’s Day games that includes two teams that ended the season ranked in the CFP’s Top 10. And after beating Michigan on rivalry weekend and Northwestern in the Big Ten championship, the Buckeyes were looking for a CFP invite. Considered the granddaddy of all bowl games, the Rose Bowl dates to 1902, though it wasn’t played annually until 1916. The game is preceded by the Rose Parade, early New Year’s morning. The Rose Bowl is part of the national championship rotation, and hosts a CFP semifinal every third year. In non-CFP years, the Rose Bowl extends invitations to the Big Ten and Pac-12 conference champions. At $439, this year’s average asking price is the highest of the New Year’s Day games, and fourth priciest Rose Bowl since 2011, when TicketIQ.com began tracking data. Ohio State and Washington have played only 11 times, and Ohio State holds an 8-3 all-time series advantage. The teams last met during the regular season in 2007. 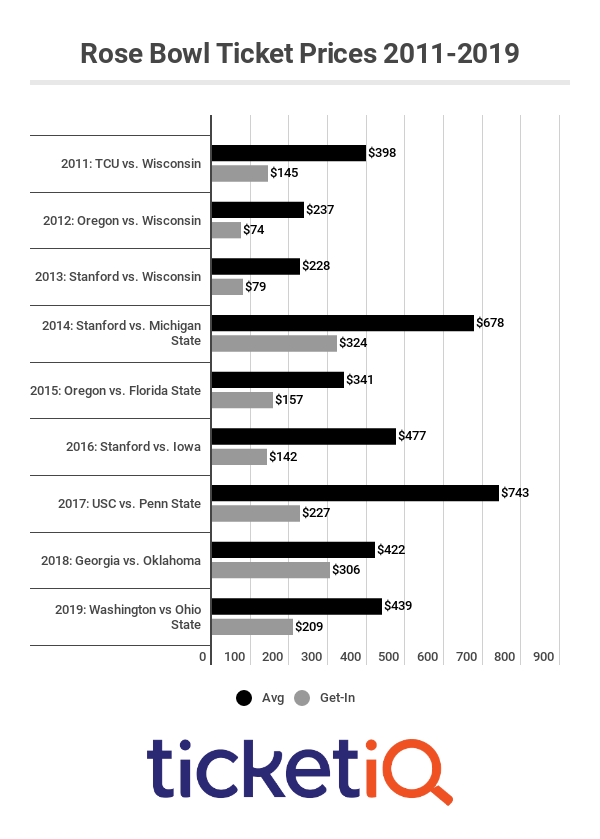 One of the three second-oldest bowl games (Orange, Sun) behind the Rose Bowl, the Sugar Bowl dates to 1935 and has traditionally had ties to the SEC and since 2015, the Big 12. The bowl extends invitations to the best available teams from those conferences after the CFP field is set. Georgia had likely been hoping for a CFP invite, but needed to beat Alabama in the SEC conference championship to get one, and lost, 35-28. The Sugar Bowl was a member of the BCS and now the CFP. It hosted national championships in 2000 and 2004, and CFP semifinals in 2015 and 2018. The $309 average asking price is the second highest among this year’s New Year’s Day bowl games and also the second most expensive Sugar Bowl since 2010, when TicketIQ.com began tracking data. The most expensive game was $319 for the 2015 national semifinal between Alabama and Ohio State, and the cheapest was $127 for the 2013 Louisville-Florida matchup. Georgia and Texas have played only four times and Texas holds a 3-1 all-time series advantage.Their last meeting was in the 1994 Cotton Bowl. 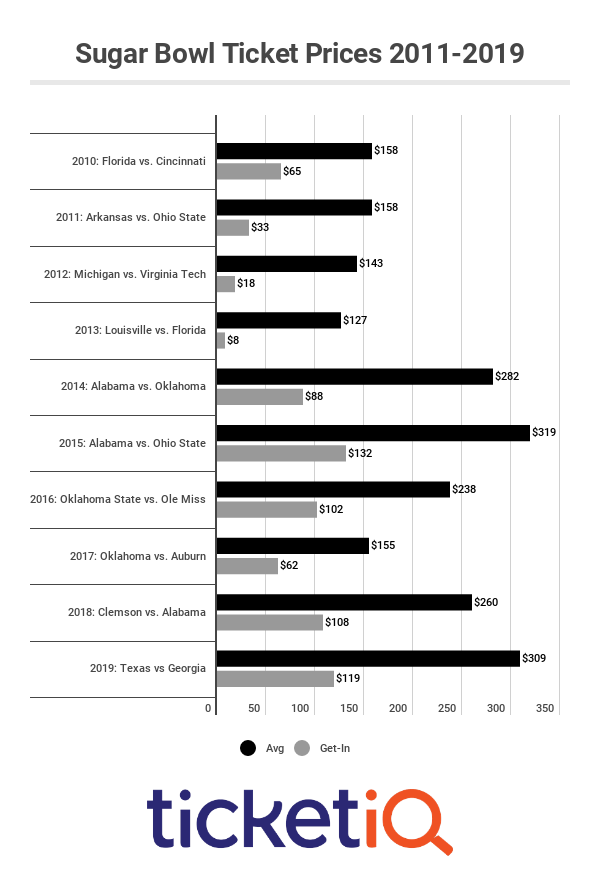 Thank you for visiting TicketIQ’s Caesars Superdome Premium + Suite Options blog post. Our goal is to provide the most helpful information on premium options at Caesars Superdome. We've included all…

How To Find The Cheapest Outback Bowl Tickets (Penn State vs. Arkansas)

How To Find The Cheapest Citrus Bowl Tickets (Iowa vs Kentucky)

How To Find The Cheapest 2022 Rose Bowl Tickets

Outback Bowl Tickets Are Down 26% In Last Week