With Tiger Woods still on track to play in the Masters – it would be his 22nd appearance – demand for weekly badges, and the tournament as a whole, is at one of the highest for the decade, according to secondary ticket marketplace TicketIQ.com. As of mid-March, the average asking price for a Masters weekly badge was $9,911. If that price holds, it would be the priciest since 2012, when TicketIQ.com started tracking data.

The next most expensive year was 2013, when fans paid an average of $9,267 for a weekly badge. In 2017, the average asking price settled at $7,684. The 2013 Masters was one of the most exciting in modern history, with Adam Scott winning in a sudden-death playoff against Angel Cabrera.

Woods has played in more Masters than any other major, and has won four. He’s also won four PGA Championships, but hasn’t won a major since the 2008 U.S. Open. Woods has been working to rebuild his career since undergoing four back surgeries between 2014-17. He last won a tournament in 2018, during which he played his first full season since 2013

Below is a look at how pricing on the secondary market is shaping up.

Weekly badges for this year’s Masters have the highest average asking price and second highest get-in price on the secondary market for the decade. With 36 badges remaining less than a month in advance and Woods in the field, there’s a good chance both numbers will rise. The next highest average asking price of the decade was $9,267 in 2013, which had the highest get-in price of the decade at $9,034. In 2013, only six badges went unclaimed.

The cheapest Masters of the last 10 years was in 2016, when a weekly badge could be had for $1,768 and the get-in price was $260. That year, Jordan Spieth had an epic collapse on the back nine on Sunday, paving the way for Danny Willett to win his first and only major.

Among the big names in the field this year are past champions Woods, Sergio Garcia, Phil Mickelson, Spieth and Bubba Watson. Defending champion Patrick Reed will also be in the field.

There’s nothing cheap about a day pass to the Masters, but the best deal of the week is Saturday, when the average asking price is $2,250 and the get-in price is $1,975. Saturday is traditionally the cheapest day of any golf tournament, as the cut has already been made, but the tournament likely won’t be decided by a Saturday round.

For comparison, the most expensive average asking price for a day pass of the last decade cost fans an average of $3,616 to see the first round in 2016. The cheapest was a Thursday day pass in 2014, which cost fans $1,017.

On the secondary market, ticket marketplace TicketIQ.com has individual tickets for each competition available beginning at $1,916 for Saturday up to $2,400 for Thursday.

The priciest practice day on the secondary market is Wednesday, for which fans will pay more than double and nearly double the price of Monday and Tuesday. Why? The Masters famed par-3 tournament, when those in the Masters field and past champions play the club’s nine-hole par-3 course. Prior to 2017, the par-3 tournament was open to anyone Augusta National wanted to invite. No player has ever won the par-3 tournament and gone on to win the Masters in the same week, though several past champions, including Arnold Palmer and Ben Crenshaw won both during their careers. 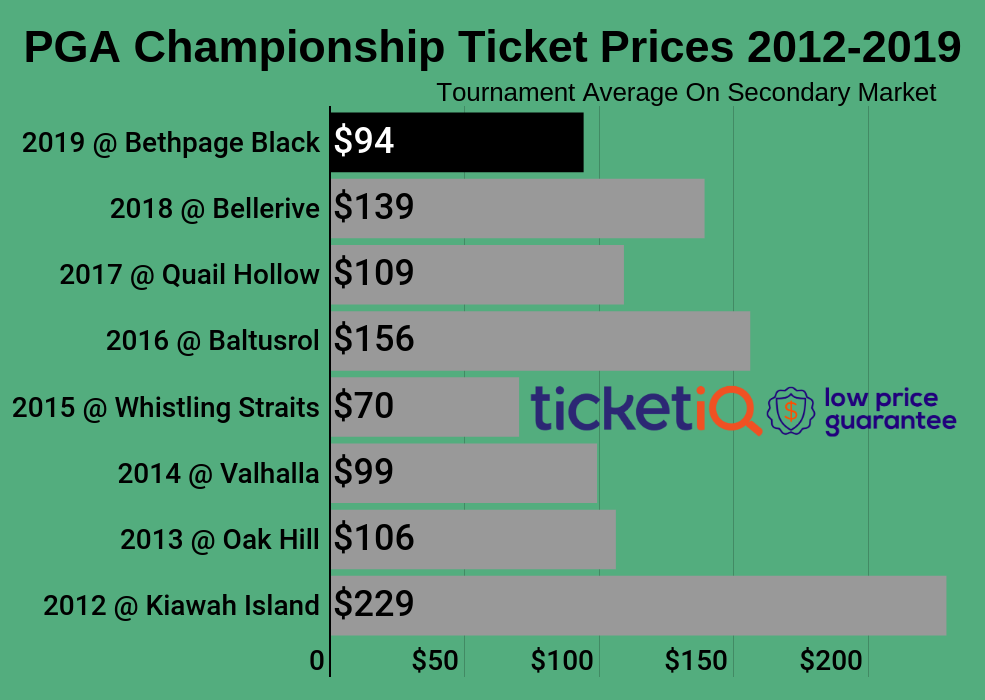 Looking for 2017 Masters Tournament Tickets? Expect to Pay up If So

Average Price For 2016 Masters Tickets Up 60% Since Last Year

Prices For Masters Tickets Drop With Tiger Out

The Masters Tickets Out Pricing Other Majors