Backstreet Boys have announced new tour dates which kicks off July 10th in New York and closes out on October 9th in Los Angeles, CA. Tickets went on sale to the general public on February 14th.

Backstreet Boys will embark on a massive 45-date trek throughout the summer. This tour is an extension of their 2019 ‘DNA World Tour’ which supported their recent #1 album, DNA. Band member, AJ McClean reveals, “We give our fans 100%, night after night, putting on the best Backstreet Boys show we can… We play our hits, we dance our asses off and we do it because we love our fans. We have the best fans in the world. They come out to party and they sing at the top of their lungs and we feed off that energy. We can’t wait to take this show on the road again this summer.”

Tickets went on sale to the general public through Ticketmaster at 10am PT on February 14th. Presale tickets were available now for Official Platinum members and Fan Club members.

How Much Are Backstreet Boys 2020 'DNA World Tour' Tickets

On the secondary market, ticket prices for the opener on July 10th in New York start at $110, while the closing show on October 9th in Los Angeles, CA starts at $134. While those two higher demand dates have get-in prices north of $100 prices for most dates start under $100, with many in the $65 to $75 range.

Info on last year's Summer Leg of the tour below

Where To Buy Backstreet Boys Tickets

Despite the fact that the Backstreet boys don't begin the US leg of their tour, tickets have sold well, which means that fans looking to see their favorite 90s boy band will need to shop around and look at ticket options on both the secondary market and directly through Ticketmaster.com for primary options.  TicketIQ has a Low Price Guarantees for all Backstreet Boys DNA Tour shows in the US. TicketIQ is a ticket market company with access to Low Price Guarantees on all Concert tickets on the secondary ticket market. If you find the same ticket for less on a site like Stubhub or Seatgeek, we'll give you 200% of the difference in ticket credit.

To helps fans make the best decision, we've put together a summary of six shows across the tour with a breakdown of tickets 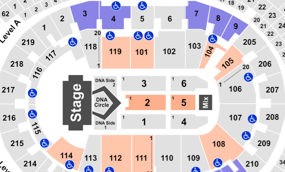 still available from Ticketmaster as well as secondary-market options on TicketIQ. All the numbers below are subject to change and a snap shot of where the market is with roughly 60 days the US leg kicks off, after an extensive European leg. The floor configuration is a single stage with a DNA Circle and Side located in front of the first three floor section.  DNA Circle

As the summary shows, most of the floor seats are sold out on Ticketmaster, with the exception of mostly Official Platinum listings, which are market-based priced anyway, which means they're priced dynamically to compete with the secondary market.  300 level seats are sold out in half of the below shows, with the primary market as slightly better option for most shows where there's inventory available.

How Much Are Backstreet Boys Tickets

Backstreet Boys and Avril Lavigne set out for Summer Tour