by TicketIQ
With their convincing 5-1 win in game 6 of the 2019 Stanley Cup Final in St. Louis, the Boston Bruins have forced a decisive Game 7, which will take place Wednesday night at TD Garden. If they win game 7, they'll be the 3rd team from Boston to win a major league sports championship in the current calendar season. If they're able to accomplish that feat, it would be the first time since 1969-70 when New York pulled it off with the Mets, Knicks and Jets all winning championships in their respective sports.  TicketIQ has Low Price Guarantees on all Bruins Stanley Cup Playoff tickets for games at TD Garden. 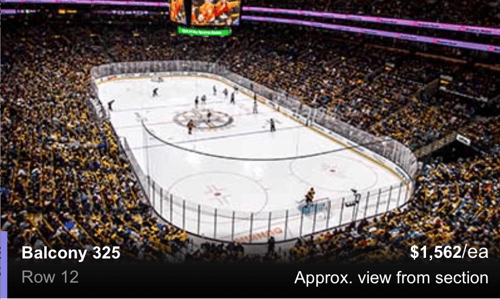 Lower Level Seats at Boston Garden for Game 7 start at $2,435 with the most expensive seats going for over $12,000 for a first row seat in section 13. 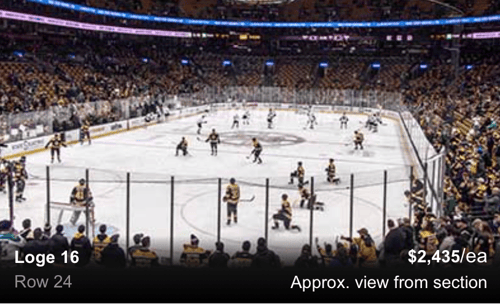 Despite the glut of championship tickets, it doesn't seem that ticket appetite has diminished for Boston sports fans.  For their third Stanley Cup Finals this decade, this is currently the most expensive we've tracked, based on the cheapest ticket available. Below are prices for the previous games over the 2019 Stanley Cup Final at Boston Garden. With Game 7 prices as high as they are, prices are approaching Super Bowl levels, with the cheap seats breaking the $2,000 mark. 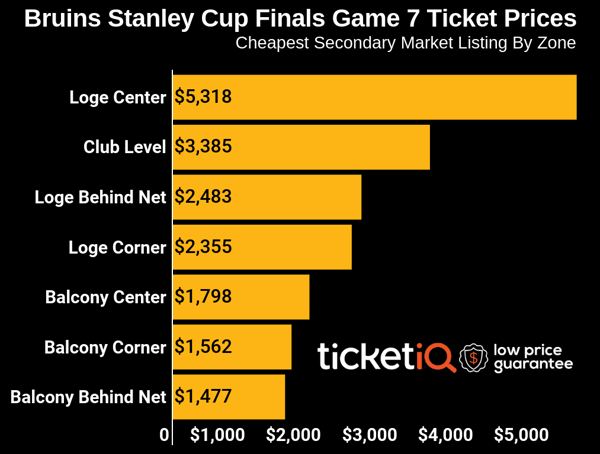 For fans looking to get the best deals on 2019 Stanley Cup Finals  tickets in Boston, prices on ticket for game 5 in Boston start at $485.  While prices are as high as ever for Bruins tickets Stanley Cup Finals tickets, they're a relatively bargain compared to Patriots tickets in the Super Bowl, and almost twice as expensive as Red Sox Tickets from the World Series of years past.

🎟️🏒🐻
For the 2019 Eastern Conference Finals matchup against the Hurricanes, ticket prices are historically cheap compared to other ECF series at TD Garden. At an average price of $379, prices are just below the $384 average for the 2015 series and the $392 average for their 2011 series. For fans looking to get the best ticket prices, it's important to look at both the primary and secondary ticket market.  While TD Garden will be 100% full when the puck drops for game 2 on Sunday, currently there are many options available.  For fans looking to get the cheapest ticket, the team has around 500 tickets available for sale in the upper level behind the goal the Hurricanes shoot twice on.
📊🎟 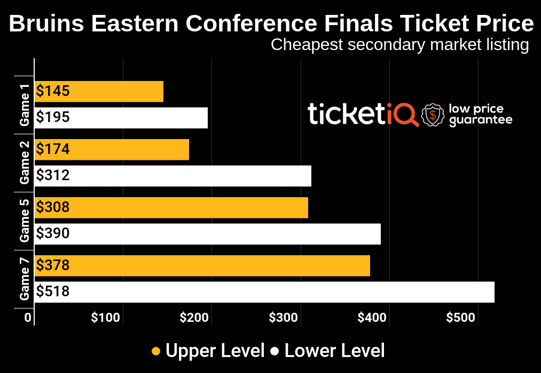 Those tickets start at $249+fees, while the same section on TicketIQ are going for $211 after fees. Lower level seats behind the goal that the Bruins shoot twice on are starting from around $350 after fees on TicketIQ. With a sixth row tickets going for around $425. For fans looking for 'on the glass' experience, the team is also the best ticket buying options with $999 first row tickets available on Ticketmaster. While every game this series will be different, the team is likely to continue as the best option for the cheapest and the most expensive tickets, while the secondary market is the best option for most of the tickets that don't fit into one of those two categories.
While prices at the TD Garden are historically cheap when it comes to all Eastern Conference Final ticket prices, the considerably more exepsive for the Stanley Cup. Currently ticket prices for Game 1 of the Stanley Cup Finals at Boston Garden are going for over $700, which makes the prices for the Eastern Conference Finals seem like an ever better value.  TicketIQ is a ticket marketplace with a Low Price Guarantee on all NHL Tickets. With TicketIQ's Low Price Guarantee, if you find the same ticket for less (after fees) on any other major secondary site like StubHub or Seatgeek, TicketIQ will give you 200% of the difference toward the purchase.
📊🎟 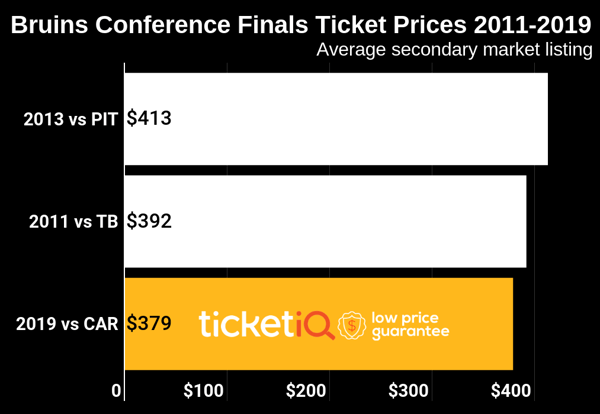 This series has the NHL’s highest average asking price on the secondary market and the average for a game at Toronto is also the highest in the NHL. These teams have a rich playoff history, and you only have to look to last season to get a taste of the excitement – the Bruins eliminated the Maple Leafs in seven games in the second round. This series marks the 16th time the teams have met in the postseason.

Boston Bruins fans are no strangers to the Stanley Cup Finals. But they do know a little something about how unpredictable the post season can be. That said, while the average asking price for Bruins playoff tickets on the secondary market are the second highest since TicketIQ.com began tracking data in 2011, they are in the middle of the pack this year.

The Bruins won't be home during the playoffs until Game 3, and the average asking price for ticket the games at TD Garden is currently $422, second historically behind 2014's $522 asking price. The cheapest second-round playoff series in Boston this decade was in 2011 ($116) -- when, paradoxically, the Bruins last won a Stanley Cup.

It appears that Boston fans are pricing in the notion that despite their team's success, any one of the four remaining teams could advance to the final series.

After beating Toronto in seven games in the opening round, the Bruins will face off against the Tampa Bay Lightning tonight in the second round. The Lightning is hosting the first two games, and the overall average asking price for tickets to the series is $359. The most expensive asking price on the secondary market for tickets in Boston is for the if-needed Game 6 ($518). The next priciest is Game 4 ($391), followed by Game 3 ($358). The get-in prices in Boston range from $169 for Game 3 to $201 for Game 4. Though Game 6 has the highest average asking price, at $195, the get-in price is cheaper than Game 4.

One of the NHL's "Original Six," the Bruins have won six Stanley Cups and played in the championship game 19 times. Boston finished second in the Atlantic Division this season.