After avoiding elimination in Toronto in Game 5, the Warriors have forced a game 6 and the 2019 NBA finals will return to Oracle Arena for what will definitively be the Oakland arena's final game.  TicketIQ has Low Price Guarantees on Warriors NBA Finals tickets for games at Oracle Arena.

Prices for game 6, however, are way down on the secondary market and now start at around $550, with the cheapest lower level seat going for $1,100.  The most expensive tickets on TicketIQ is over $39,000 for a VIP courtside seat in row BB. Prices for game 6 of the NBA finals are about 50% more expensive than prices for the first two games of the 2019 finals.

TicketIQ is committed to the cheapest tickets possible, and we make much less on sold out tickets compared to major other major marketplaces like StubHub and Vivid. That means ticket buyers save from up to 25% on TicketIQ on sports, music and theater. :the_horns: We're able to do this because we also work with teams, venues, and other ticket owners, to help them sell tickets at face price, directly to consumers like you, through Ticketmaster, Seatgeek and other primary ticketing platforms.

When looking at the average price of tickets, it's actually the most expensive series we've tracked over the last decade for both teams and overall series average. Whether it's because the 2019 final is the last time to see a Warriors game at Oracle arena, the Warriors home since 1971, or whether fans are excited to see someone other than the Cavaliers, 2019 will not be cheap for Warriors fans looking for finals tickets. Prices across the series are also on the rise and now the average prices for a potential game 6 and 7 are the two most expensive NBA Finals games we've ever tracked. 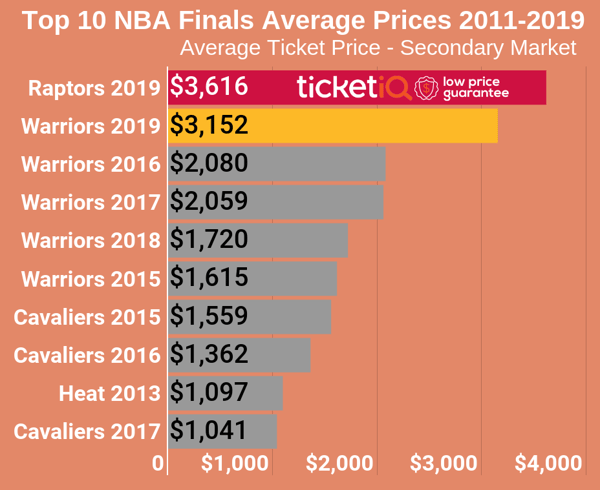 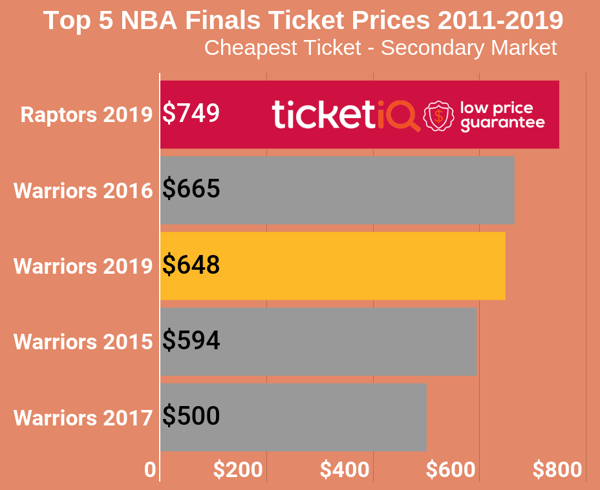 Tonight will be the cheapest opportunity to go to an NBA Finals game in five years. Yep, if you live in Cleveland and have $235 burning a hole in your pocket, you can get into Quicken Loans Arena for Game 3 of the Golden State Warriors-Cleveland Cavaliers NBA Finals series.

Overall, Warriors-Cavs IV is the second most expensive Finals of the decade, according to TicketIQ.com. The average asking price of $1,855 is second only to Warriors-Cavs II in 2016, when the average was $1,931.

Based On Get-In Price, Tickets For Cavs-Warriors IV Are Cheapest Yet

A Cleveland Cavaliers-Golden State Warriors NBA final doesn’t seem to get old. At least not from a fan demand perspective.

But if all you’re looking for is a seat in the arena when the NBA Finals tips off on Thursday – you’re in luck. According to TicketIQ.com, the get-in price for the series as a whole is the cheapest its been in the last four years. At $390 on the secondary market, the price is $5 cheaper than the 2017 get-in price 23 percent off its peak of $502 in 2016.

After both teams won their Game 7s over the weekend, average asking prices on the secondary market are approaching the highest of the four meetings.

Fans in the San Francisco Bay area are driving ticket prices to Oracle Arena to an all-time high, according to TicketIQ.com. The average asking price on the secondary market of $2,373 blows away the average price at Quicken Loans Arena -- $1,302. For the Warriors and the NBA as a whole, that price is the highest since TicketIQ began tracking data in 2011. For the Cavaliers, the average asking price is the third highest in history at Quicken Loans Arena.

The defending champion Warriors have won two of the last three Finals meetings, and only the 2016 series, which Cleveland won, went to seven games.

How to Buy The Cheapest 2022 Warriors NBA Finals Tickets