For Cher Fans in the United States, there's just one more week this spring to see the Legend perform the latest and perhaps final farewell tour, Here We Go Again.  For the remaining shows, tickets are available both from Ticketmaster as well as via the secondary ticket market.

For the US shows, there is low to medium availability on the primary ticket market for the four remaining shows in May. Two of remaining shows, at Xcel Energy Center, Minnesota and Fiserv Forum in Milwaukee, are almost completely sold out, with limited tickets in 4-5 sections. For those shows, the secondary ticket market is definitely the best in terms of selection.  In addition to the two shows in Omaha and Sioux Falls, the five show in Canada also have ample primary market inventory. With so many options available, it's important to shop all options.  TicketIQ is a ticket market place with access to Low Price Guarantees on all Concert tickets. If you find the same ticket for less, we'll give you 200% of the difference in ticket credit.

Visit TicketIQ to Find The Cheapest Cher tickets with a Low Price Guarantee for all shows on the tour, through December.

For fans that can't make it to any of the US shows this May, there's more coming in fall at Chicago's United Center, Madison Square Garden in New York City, and Boston's TD Garden.  Those shows all have different level of inventory available on the primary market, with Madison Square Garden mostly sold out in the lower level, but with ample upper level inventory available, starting from $157, which is the cheapest option on the market for that show. Pepsi Center also has lot of primary market availability through AXS. 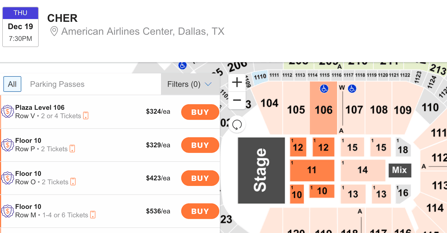 After the Vegas residency, Cher puts an emphatic finish to the Here We Go Again tour with 13 shows through the final show on December 19th in Dallas, TX. For the final show, there are Floor seats at the back of the floor section by the mixing board on Ticketmaster, however, if you want to get into the front half of the floor, the secondary market is the only options, with prices start from $324.

Renowned for her multiple ‘farewell’ tours, it’s little surprise that pop’s ultimate diva has once again extended her latest with the release of Cher tickets for an additional five North American dates this fall.

The 67-year-old, who returned to the live arena earlier back in March, nine years after ‘retiring’ from life on the road, initially intended to conclude her Dressed To Kill tour at Wichita’s Intrust Bank Arena on November 3 – tickets for which are available on TicketIQ at a get-in price of $46.

But the Grammy, Emmy and Oscar winner has this week announced that she will now move onto Lubbock’s United Supermarkets Arena on Nov 9 ($152), before taking in Austin’s Frank Erwin Center on Nov 11, Corpus Christi’s American Bank Center on Nov 11 and Bossier City’s CenturyLink Center on Nov 15, with the Nov 19 date at the North Charleston Coliseum currently pencilled in as the tour’s finale.

There are still plenty of Cher tickets on offer at TicketIQ for the rest of the tour’s second North American leg, which kicks off at Albany’s Times Union Center on September 11 ($39), with the Sept 24 performance at University Park’s Bryce Jordan Center with the lowest get-in price at $24 and the October 5 gig at Toronto’s Air Canada Centre with the highest at $80.
Scheduled in support of her 25th studio album, Closer To The Truth, which peaked at No. 3 on the Billboard 200 last September, the Dressed To Kill tour has already grossed over $55 million in sales of Cher tickets, making it one of the most lucrative of 2014, with another 29 shows still to go.

Fans with Cher tickets for the first leg were treated to a Vegas-style spectacular featuring her trio of 70s US number ones (“Dark Lady,” “Gypsys, Tramps and Thieves,” “Half Breed”), her 80s soft-rock classics “I Found Someone” and “If I Could Turn Back Time” and her 90s dance anthem “Believe,” as well as all the highlights from her latest LP (“Woman’s World,” “I Hope You Find It)”, a posthumous duet with her late husband Sonny Bono (“I Got You Babe”) and several numbers from her last big-screen venture Burlesque (“You Haven’t Seen The Last Of Me,” “Welcome To Burlesque”). Tickets for all upcoming shows are below:

Cher Gears Up For First World Tour In Nine Years

Nine years after announcing that she was retiring from the world stage, one of pop’s most successful divas is now gearing up to embark on a transatlantic tour following the release of Cher tickets for 65 dates across North America and Europe.

Named after one of the highlights from her 26th studio effort Closer To The Truth, the Dressed To Kill tour will kick off at Phoenix’s US Airways Center on March 22 – tickets for which are available on TicketIQ at a get-in price of $81 and an average price of $325.

There are still hundreds of Cher tickets waiting to be snapped up for most dates on TicketIQ with the Mar 28 performance at North Little Rock’s Verizon Arena currently the lowest get-in and average price of the whole tour at $35/$120.

Cher’s previous three-year run of Vegas shows featured everything from her run of 70s number ones (“Gypsys, Tramps and Thieves,” “Dark Lady,” “Half-Breed”) to her string of 80s rock staples (“If I Could Turn Back Time,” “ Found Someone”) to her late 90s dance-pop anthems (“Believe,” “Strong Enough”) alongside the odd Sonny & Cher classic and her much-loved covers of “Walking In Memphis” and “The Shoop Shoop Song (It’s In His Kiss).”

But fans with Cher tickets should expect to hear plenty of material from her current LP, which reached No.3 on the Billboard 200 last September, the highest peak of her career. While the Oscar, Grammy and Emmy winner will also be accompanied by two staples of the early MTV era with Pat Benatar and her guitarist husband Neil Giraldo providing the support for the first 13 shows and Cyndi Lauper taking over opening act duties for the remainder of the tour.

Tears For Fears Announce First US Dates In 3 Years

What events have been canceled or postponed due to coronavirus Canceled: The University of Connecticut Huskies have announced that they are suspending their football program for the 2020 season.…