Fans can fill out this form on the Bucs website to request information on single-game tickets and when they will go on sale.

On the secondary market, TicketIQ has Fee-Free Tampa Bay Buccaneers tickets which also include a Refund Guarantee. Our Refund Guarantee states that if an event is canceled or deemed unfit for fans to attend, TicketIQ will refund ticket buyers in as soon as 15 days. That means that you can buy from TicketIQ worry-free. Customers on TicketIQ save between 15%-25% compared to other secondary market ticketing sites.

It was also reported recently that 30 of the 32 NFL teams already have approval for full capacity at stadiums at the start of the 2021 preseason. The Denver Broncos and Indianapolis Colts have yet to get approval, but both teams are reportedly "on track".

Fans can request information on season tickets via the Bucs website. According to the team inventory is extremely limited.

The Bucs and Raymond James Stadium offer a variety of Club options:

East Stadium Club: Located on the 200 Level, this Club was renovated in 2018, and the Bucs bill it as “affordable luxury.” Ticket holders also get access to the 10,000-square-foot Bar 76, which has 50 flat-screen televisions, upscale culinary offerings and craft beer.  There are 162 televisions throughout the Club, which opens an hour before the game.

Hall of Fame Club: This Club has a 180-degree panoramic view of the field as well as all-inclusive food and non-alcoholic beverages.  Located on the east side of the stadium, the Club has retractable glass windows, so ticket holders can enjoy the climate-controlled atmosphere as well as the roar of the crowd.

Row A: Though not technically a Club, the Bucs offer special amenities for those wanting to purchase tickets in the first row on the field level.

NO BAGS ALLOWED IN THE STADIUM.

GUESTS 5 YEARS OR OLDER WILL BE REQUIRED TO WEAR A FACE COVERING THAT COVERS THEIR MOUTH AND NOSE. GUESTS MUST BE WEARING FACE COVERINGS PRIOR TO ENTERING THE BAG SCREENING ZONES.

FACE COVERINGS MUST BE WORN ONCE THE GUEST ENTERS THE BAG SCREENING ZONES UNTIL THEY LEAVE THE STADIUM UNLESS THEY ARE ACTIVELY EATING OR DRINKING.

FACE COVERINGS WILL BE AVAILABLE FOR GUESTS WHO DO NOT HAVE THEM OR WHO NEED A REPLACEMENT AT ALL EXTERIOR AND INTERIOR GUEST SERVICES BOOTHS.

NO TAILGATING ALLOWED FOR ANY EVENT AT RAYMOND JAMES STADIUM.

GUESTS ARE EXPECTED TO REMAIN IN THEIR DESIGNATED TICKETED SEATS AT ALL TIMES WHILE IN THE STADIUM BOWL SEATING SECTIONS. STANDING/CONGREGATING IN OPEN AREAS OR SITTING ANYWHERE OTHER THAN THE SEAT LISTED ON THE GUESTS’ TICKET IS PROHIBITED.

TO ALLOW FOR SOCIAL DISTANCING, THE FOLLOWING MODIFICATIONS HAVE BEEN MADE. USE OF STANCHIONS, BIKE RACKS, AND OTHER QUEUEING DEVICES, ONE WAY TRAFFIC, EXCESS FURNITURE HAS BEEN REMOVED AND PLACED IN STORAGE AND STANDING ROOM ONLY LOCATIONS IN ENDZONES HAVE BEEN CONVERTED INTO ENTERTAINMENT ZONES. GUESTS OR PODS OF GUESTS MUST MAINTAIN SIX FOOT DISTANCING, TO THE EXTENT THAT PHYSICAL DISTANCING IS POSSIBLE.

ALL RETAIL FOOD & BEVERAGE LOCATIONS WILL BE CASHLESS. REVERSE ATMS WILL BE AVAILABLE AT SELECT LOCATIONS TO CONVERT CASH TO A UNIVERSAL USE VISA VALUE CARD.

The Buccaneers accept mobile tickets only, no paper tickets or screen shots. Fans can download the Buccaneers App onto mobile devices through Google Play or the App Store, and can use the app to enter Raymond James Stadium, or buy, sell or transfer tickets.

How Much Are 2020 Tampa Bay Buccaneers Tickets

Where To 2019 Buy Buccaneers Tickets

For the 2019 season, no team has taken on the secondary market more aggressively than the Tampa Bay Buccaneers.  After not renewing thousands of season ticket holders three years ago, the Bucs have been on a path toward market consolidation for some time.  Despite a class action lawsuit filed last January, the Bucs appear to be in full assault of the secondary market. Over the last three years, the quantity of Buccaneers tickets available in the secondary market dropped from over 20,000 to under 2,000. As a result of the low quantity of tickets available, 2019 is the most expensive average price for Buccaneers prices this decade. With prices as high as they are on the secondary ticket market, Ticketmaster.com is the best options for tickets to see any of the home games at Raymond James this season. 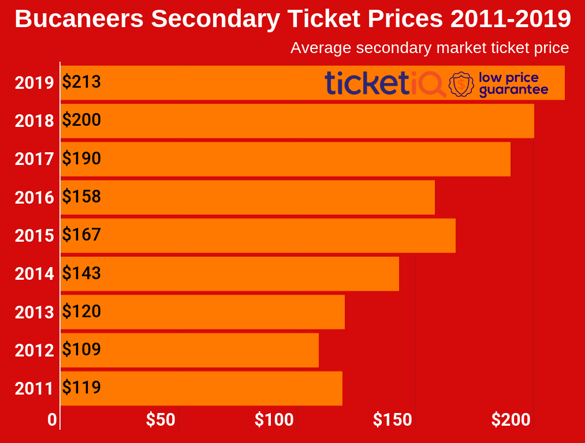 With so little supply on the secondary market, prices are twice as high as the primary market, which is exactly what the Bucs are looking for as they look to make the flip to a team-driven marketplace faster than any other NFL team. While they have more control over their ticketing than any other team, they also have more risk. With renewed confidence in Jameis Winston, the 5th pick in the 2019 draft and 7 picks overall, Buccaneers ticket revenue stand to benefit from a strong draft and competitive season more than any other team in football.

How Much Are 2019 Buccaneers Tickets

The Tampa Bay Buccaneers didn’t enjoy much success in Lovie Smith’s first season with the team in 2014, but there is hope that a winning foundation was still put in place. For the Buccaneers to make major strides going forward, they’ll need to put something else in place - a franchise quarterback. With the team almost surely taking either Marcus Mariota or Jameis Winston with the first pick in the 2015 NFL Draft, Tampa Bay fans should be able to get excited about the future; one they hope starts quickly and successfully this season.

There’s no guarantee the Bucs start piling on the wins right away in just Smith’s second season, but given his quick rise when he took over the Chicago Bears, it’s not crazy to think about. Tampa Bay will need to win some big games before anyone takes them seriously, though, and few will be bigger than a Week 10 clash with the Dallas Cowboys. Tony Romo and co. try to get it done without DeMarco Murray in 2015 and their meeting with the Bucs at Raymond James Stadium will be another attempt to do just that. Tampa Bay hasn’t had a whole lot of success against the Cowboys, though, as they’ve beaten Dallas just three times in team history and saw the ‘Boys win the most recent meeting in 2012, 16-10.

When the Cowboys come to town, prices for Buccaneers tickets on the secondary market will go up. The Week 10 meeting between the two teams will be the most expensive game in Tampa this season. Buccaneers vs Cowboys tickets have a get-in price of $117.

Dallas isn’t the only playoff team Tampa Bay will have to try to get past in 2015, but they’re still just one of three. At least on paper, that offers up the possibility that the Bucs could take advantage of a reasonably easy schedule. That doesn’t make it a total cakewalk, however, as the Bucs get two tough road games in the first three weeks (at New Orleans and Houston) and two more in a row immediately following their bye (at Washington and Atlanta). While playing on the road in four of their first seven games won’t be easy, it’s at least nice to know just one of those opponents made the playoffs a year ago, and none of them had a winning record.

An in-state game will bring the least expensive prices at Raymond James Stadium this season, a Week 5 game against the Jacksonville Jaguars. The get-in price for Buccaneers vs Jaguars tickets is $71.

While Tampa Bay could be set up for success early on, they’ll still need to buckle down and execute down the stretch to make a realistic playoff push. They also may be doing so with a rookie quarterback under center. Regardless, the odds could be in their favor if they position themselves correctly as the season winds down, as they get three of their final five games at Raymond James Stadium. None are more important that two huge divisional clashes, though, as they take on Drew Brees and the Saints in Week 14 and cap the season with a potentially massive showdown in Carolina with the Panthers.

Where To Buy NFL Tickets Depending on the team, primary market tickets are available via Ticketmaster and Seatgeek. For 2021, the league has expanded to nine teams for each home team, which…

How To Find The Cheapest Falcons Vs. Buccaneers Tickets In 2020

How To Find The Cheapest Saints Vs. Buccaneers Tickets In 2020