Where To Buy George Strait Tickets

On September 26, 2012, George Strait announced that he was retiring from touring, and that his Cowboy Rides Away Tour would be his last. Despite breaking records on the 2013 and 2014 tour, in what would have been a strong swan song for any normal artists, the legendary 'King Of Country' has continued to perform. He's currently playing shows as part of his Las Vegas residency at T-Mobile Arena where's he's currently playing part of his 22 sold-out “Strait to Vegas” residency.  He's now gone a step further, and announced a slate of 2020 shows, the first of which will be in Wichita and Kansas City on January 24 and 25 next year, billed as “Strait to the Heartland”.  For the Country Music Hall of Famer's return to the Sprint Center for with special guest Asleep at the Wheel. Below is an overview of some shows in 2019 as well as the cheapest tickets for each show.

George Strait tickets are available on TicketIQ with Low Price Guarantees for every event in 2019 as well as the 2020 shows.

TicketIQ is a ticket market company with access to Low Price Guarantees on all Concert tickets on the secondary ticket market. If you find the same ticket for less on a site like Stubhub or Seatgeek, we'll give you 200% of the difference in ticket credit.

How Much Are George Strait Tickets 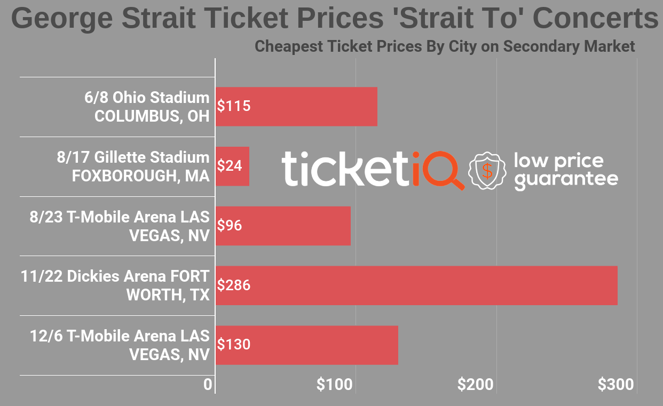 For fans that can't wait until 2020, below are the opportunities to see the King of Country.


The 61-year-old, who has already performed seven dates this year, will resume his final series of shows at Phoenix’s US Airways Center on February 7, tickets for which are available on TicketIQ at a get-in price of $172 and an average price of $395.

While the final stop at the AT&T Stadium in his home state of Texas on June 7 ($206/$746) can boast an all-star line-up including Alan Jackson, Kenny Chesney, Faith Hill, Jason Aldean, Miranda Lambert and Eric Church.

There are still thousands of George Strait tickets up for grabs on TicketIQ for most shows with the penultimate May 31 gig at Foxborough’s Gillette Stadium currently the lowest get-in price at $18 (average price $180) and the Feb 8 performance at Los Angeles’ Staples Center the cheapest average price at $144 (get-in price $27). Three-day passes are also on sale for the Bayou Country Superfest on May 23-25 ($79/$192), the opening night of which Strait is confirmed to headline.

Alongside several tracks from last year’s US No.2 album, Love Is Everything (“Give It All We Got Tonight,” “That’s What Breaking Hearts Do”) and a cover version of Johnny Cash’s “Folsom Prison Blues,” fans with George Strait tickets should also look forward to hearing country number ones from the 80s (“A Fire I Can’t Put Out,” “The Chair”) 90s (“Check Yes Or No”) and 00s (“Give It Away,” “River Of Love”).

How To Find The Cheapest Garth Brooks Tickets + 2022 Tour Dates

Bruce Springsteen Rocks Brooklyn In This Week's Most Expensive Concert