This week, Jason Aldean kicked off his Ride All Night Tour kicked off this month with two shows at Mohegan Sun Arena in Uncasville, Connecticut. The tour is titled the Ride All Night Tour after a track on his latest album, Rearview Town.  For fans looking to see one of the shows, there are options on both the primary and secondary market, which means it's important to shop around.  The tour builds on Aldean’s last multi-city tour, the High Noon Neon Tour, and features two of country’s fastest rising acts in support: Kane Brown and Carly Pearce will appear on each date. Aldean’s longtime hype man, Dee Jay Silver, is also on the lineup.

Where To Buy Jason Aldean Tickets

As far as ticket availability goes, the first four shows on the tour, tickets are almost completely sold out, which means that the secondary market is the best option for getting tickets. The first show with significant amount of unsold tickets is BB&T Pavilion , Camden, NJ, which has 200-level tickets from $100 with lawn seats from $30. For shows from June through September, the secondary market is also still the best option in most cases.

TicketIQ has tickets to all  stops on Jason Aldean's Ride All Night Tour. TicketIQ is a ticket market place with access to Low Price Guarantees on all Concert tickets. If you find the same ticket for less, we'll give you 200% of the difference in ticket credit.

How Much Are Jason Aldean Tickets 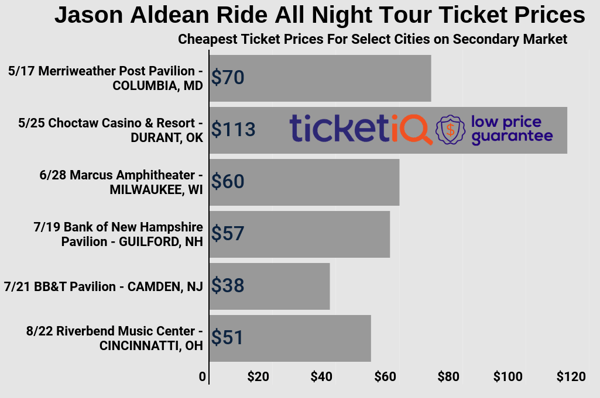 Sold Out Shows Where Secondary Market is Only Option

Shows Where Prices Are Cheapest on the Secondary Market

For the final 10 shows of the tour, there are ample tickets available through Ticketmaster.com, meaning they're the best place to check before you make a final decision.

The ACM Entertainer of the Year Jason Aldean launched his massive U.S. tour earlier this month with shows scheduled into October. After selling out Fenway Park in 90 minutes, the singer added a second date with Kid Rock on September 10.

Currently, Aldean's priciest show is slated to be his August 14 stop at the San Manuel Amphitheater in San Bernardino, CA, where tickets are averaging $339 with a get-in of $55. His cheapest show is on track to be his June 26 stop at Isleta Amphitheater IN Albuquerque, where tickets are averaging just $138, with a get-in of $38.

(UPDATE 4/15/16) Jason Aldean's tour bus is being restocked for a U.S. trek this summer. The country singer is gearing up for a 27-show tour across the country between May and October. He'll again be joined by Thomas Rhett and A Thousand Horses at each show and will also team up with Kid Rock for a one-off show at Fenway Park on September 9.

The tour kicks off on May 19 at Walmart AMP in Rogers, Arizona and concludes on October 1 Jiffy Lube Live in Bristow, Virginia. Notable stops along the way include Gexa Energy Pavilion in Dallas, Ak-Chin Pavilion in Phoenix, Shoreline Amphitheatre in Mountain View and Hersheypark Stadium.

Jason Aldean tickets for all Six String Circus dates are now on sale. Check out the complete list of tour dates below:

(UPDATE 1/13/16) Jason Aldean will begin his "We Were Here" Tour tomorrow night at iWireless Center in Moline, Illinois, making the first of 26 headlining stops lined up in North America through May. Over that time, the average price for Jason Aldean tickets on the secondary market is $142.82.

Conversely, Aldean's cheapest gig will be his opening stop at iWireless Center, where tickets average $83.61 and the get-in price starts from $44. A May 7 gig at Merriweather Post Pavilion in Maryland ($93.19 avg./$75 get-in) and May 5 at Erie Insurance Arena in Pennsylvania ($111.20 avg./$40 get-in) are also among the cheapest gigs of tour.

Where do prices for Jason Aldean tickets on the "We Were Here" Tour stack up in comparison to his "Burn It Down" Tour? Check out our infographic below:

(ORIGINALLY PUBLISHED 10/19/15) It will be a winter to remember for country star Jason Aldean, who announced initial tour plans for an early-2016 tour over the weekend. Being dubbed the "We Were Here" Tour, Aldean will hit U.S. cities beginning in January and also head down under for three stops in Australia in March. The tour is currently set to conclude in early-May.

26 shows in total will be played over the four-month stretch. No specific venues have been announced yet, but you can check out the full list of cities the "Burnin' It Down" singer will hit early next year below. Thomas Rhett and A Thousand Horses will join him at at all U.S. shows while he makes his first-ever trip to Australia

Make sure to check back here for the latest Jason Aldean news and tour announcements.

After weeks of rumors, the first leg of Pearl Jam's 2020 North American tour has been announced. Kicking off on March 18th in Toronto, the band will make 16 stops, concluding on April 19th in…

Jason Aldean Teams Up With MLB For Summer Stadium Tour