For the Western Conference Semi-Final at SAP Center, prices are very affordable compared to Western Conference Finals over the last decade. As the infographic shows, it's the 5th least expensive price for a team's home series.  For fans figuring out to get the best deals possible, it's important to know what tickets are available directly from the Sharks as well as on the secondary market, so it's important to shop around. 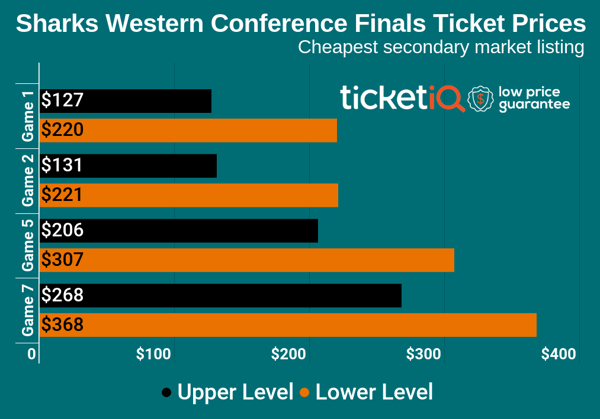 For game one Saturday night, there are more of lower level seats available on Ticketmaster.  For the cheapest tickets,  TicketIQ is about 8% cheaper, with a 7th-row seat in the 200s going for $125 compared to $140 on Ticketmaster (both after fees). The same holds for 200 center in the upper level. For tickets in the lower half of the 200s level, the secondary market is the only option, with tickets from the team sold out. Anything in the first 10 rows is in going for over $200, with lower five rows going for over $300.  Lower level corner seats are significantly cheaper on the secondary market than front he team, with a 22nd row  pair in section 106 going for $287 on TicketIQ vs. $400 for a 15th row pair in the same section.
CLICK HERE TO USE Code Blog25 to save $25 off ALL Sharks PLAYOFF Tickets on TicketIQ.COM
FIND LOWEST PRICES FOR ANY OF THE INDIVIDUAL GAMES BELOW
While prices at the SAP Center are historically cheap when it comes to all Western Conference Final ticket prices, they're also about 5% cheaper than the last time the Sharks and Blues faced off in a WCF series, in 2016 when the Sharks defeated the Blues in six games to advance to their only Stanley Cup Final. Currently ticket prices for Game 1 of the Stanley Cup Finals at SAP are going for over $700, which makes the prices for the Western Finals seem like an ever better value.
TicketIQ is a ticket marketplace with a Low Price Guarantee on all NHL Tickets. With TicketIQ's Low Price Guarantee, if you find the same ticket for less (after fees) on any other major secondary site like StubHub or Seatgeek, TicketIQ will give you 200% of the difference toward the purchase. 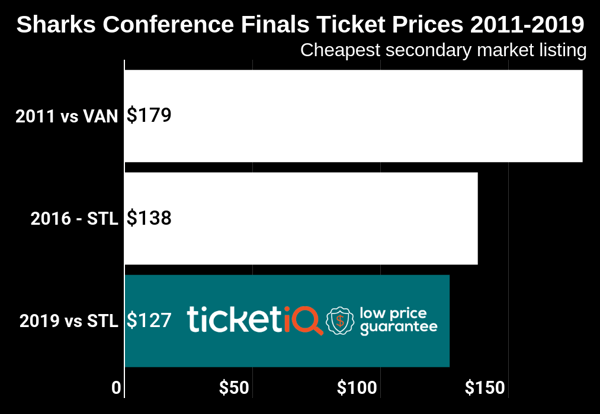 The below information is for previous rounds and series.

The San Jose Sharks made quick work of the Anaheim Ducks, sweeping their southern foes in the first round of the Stanley Cup Playoffs. The next round likely won't be so easy. The Sharks will play the upstart Vegas Golden Knights, the expansion team that is breaking records across major professional sports. Vegas, which won the Western Conference during the regular season, swept the L.A. Kings to advance.

Early asking prices on the secondary market for the matchup reflect the enthusiasm surrounding the series, which will start next week. According to TicketIQ, the average asking price for the series overall is $464 and tickets at San Jose's SAS Center are sitting at $334. That is more than double the $161 average price for a Sharks home ticket in the opening round. It's also $103 more than price at for 2016's second round series in San Jose ($231) and $91 higher than their second round series in 2013 ($243).

To put things into perspective, the price of a Sharks ticket for the opening round was the lowest among NHL teams. Though the rest of the field has not yet been set, it's unlikely that a Sharks ticket will be at the bottom of the heap for this round. It is likely that Vegas as the opponent is helping to drive prices and this series could be the start of yet another West Coast rivalry for the Sharks -- Las Vegas is just a relatively short airplane flight (and frequent destination) for Bay Area residents.

The Sharks will host a minimum of two games, with the possibility of hosting an if-needed Game 6. That game currently has the highest average asking price at $422.50. Game 3 is the least expensive at $288 and Game 4 is in the middle at $293. Overall, the San Jose home games are significantly less than the current average asking price for games in Vegas, which is $560.

The Sharks, an expansion team in 1991-92, have qualified for the post season every year but one (2014-15) since 2002-03. They reached the Stanley Cup Finals for the first time the following season, losing to Pittsburgh in six games.