The 2019 CMA Fest kicks off Thursday June has 6th, with a full slate of events scheduled in Nashville at Nissan Stadium. Tickets are available for purchase as a four-day pass or on an individual-day passes. As the below shows, ticket prices are most expensive on Friday and Saturday night, with prices that are double Thursday and Sunday. While not working the next day is worth something, is may not be worth twice as much, especially as the talent on each night is equally as impressive.  With the cheapest tickets for a 4-day pass starting at $253, that 4-day pass is the definitely the most affordable for fans who are willing to make the commitment. Tickets on the primary market from Ticketmaster are only available for a 4-day pass, and only for tickets with an obstructed view or at the very top of Nissan Stadium, from $228.

For sold out concerts, TicketIQ has Low Price Guarantees on all concert tickets, which means that if you find a secondary market ticket for less on a site like Stubhub or Seatgeek, we'll give you 200% of the difference in ticket credit. TicketIQ customers save an average of 5%-20%.

For country music fans looking to enjoy the weekend for less, the three nights at Ascend Amphitheater for CMA Music Fest start at $29 and include performances by Chase Rice + Jimmie Allen + Lindsay Ell on Thursday night, Brett Young + Mitchell Tenpenny + Jordan Davis on Friday night and Cody Johnson + Hunter Hayes + Ashley McBryde on Saturday night. While there are a few unsold tickets for Ascend, most are single tickets at the back of the venue, which means that the secondary market is the best option as well. 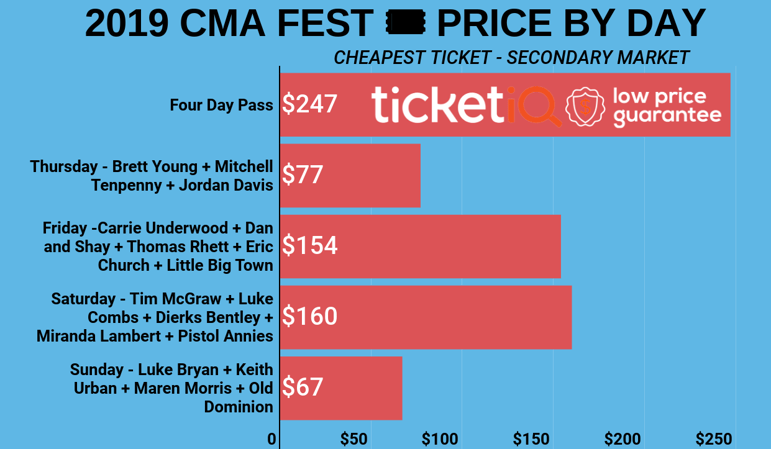 The 2015 CMA Music Festival is just around the corner, scheduled to kick off for four exciting days beginning next Thursday, June 11 through June 14 in downtown Nashville, Tennessee at LP Field.  Every June hundreds of country artists attend and perform country music concerts, meet and greet sessions with fans, and up to 30 hours of autograph sessions. The nightly concerts at LP Field will be not be free entertainment, but fans will have countless free and low-cost entertainment options across the river from the stadium at the hugely popular Chevrolet Riverfront Stage.

If country music fans are not willing to shell out that much cash for a four-day pass, they could opt for an individual day pass only. Of the four individual ticket passes, the June 12 night session at LP Field are the most expensive at an average price of $173.97 on the secondary market. The cheapest seat for the Friday night show is priced at $93.  The price of Friday’s night session at LP Field most certainly has to do with many of the big name performers that will be hitting the stage on this day such. Headliners include Zac Brown Band, Lady Antebellum and Luke Bryan.

CMA tickets for the June 13 session are going for an average price of $156.10 on the secondary market, with the cheapest seat priced at $80 as Carrie Underwood, Thomas Rhett, Brett Eldredge, Little Big Town, and many others will all be in attending.