Primary market single-game tickets for the NBA Playoffs are available via Ticketmaster.

On the secondary market, TicketIQ has Fee-Free Boston Celtics tickets with a Refund Guarantee, which states that in the event an event is canceled or deemed unfit for fans to attend, TicketIQ will refund ticket buyers in as soon as 15 days. That means that you can buy from TicketIQ worry-free.

How Much Are Boston Celtics Playoff Tickets

During the regular season, the Celtics had been allowing fans back to TD Garden at 12% capacity (2,350 fans). On May 11th the team increased that to 25% of capacity (4,789 fans). For the first round of the NBA playoffs the team will host Game 3 against the Nets at 25% of capacity and then go to full capacity on for Game 4.

On the secondary market, TicketIQ has Fee-Free Boston Celtics tickets with a Refund Guarantee, which states that in the event an event is canceled or deemed unfit for fans to attend, TicketIQ will refund ticket buyers in as soon as 15 days. That means that you can buy from TicketIQ worry-free.

The Celtics have been allowing fans back to TD Garden at 12% capacity (2,350 fans), but it was recently announced TD Garden will now be allowed to operate at a 25% of capacity (4,895 fans) beginning with the Celtics game against the Heat on May 11th.

The Celtics App can be used to purchase, manage or scan digital tickets as well to buy gear, follow the latest Celtics news or hear live audio coverage of the game. Fans can also get digital tickets via Ticketmaster for single-game tickets.

Single-game tickets on the primary market for Boston Celtics are still available, though in limited quantities for many games, according to Ticketmaster. Season tickets are sold out.

For fans seeking seats, the secondary market is another option and TicketIQ has Fee-Free Boston Celtics tickets for all games on the 2019-20 schedule, in addition to all NBA tickets.

How Much Are Boston Celtics Tickets

The average asking price on the secondary market for a Boston Celtics home game is $154, down 34% from last season’s $234. Celtics tickets are the ninth most expensive in the NBA. The priciest are $473 for a Los Angeles Lakers home game and $458 for a Golden State Warriors home game.

The average asking price is the sixth cheapest of the decade and the cheapest of the last five seasons. The priciest ticket of the decade was last season, a year after the Celtics made it to back-to-back Eastern Conference Finals. The cheapest ticket on the secondary market to a Celtics home game is currently trending at $24 for the December 9 game against Cleveland. For the higher-interest games, tickets start at $100.

According to the Celtics website, season tickets are sold out on the primary market. Fans can join a waitlist for a $100 fee that will ultimately be applied to season tickets when purchased. Fans on the waitlist get access to presales for TD Garden events, a discount at the TD Garden ProShop and the Celtics Club Green E-Newsletter.

Where Are Club Seats At TD Garden

Club Seats at TD Garden are located on the floor on the sidelines and are comprised of Sections 107-115 and 137-145. These seats are plusher than standard seats, and include in-seat wait service. Fans in Club Seats also have access to the Boston Garden Society’s in-game dining and lounges.

The Top 10 Most Expensive Games on the Celtics Schedule

After watching the Boston Celtics reach consecutive conference championships, Boston Celtics fans are starting to believe. Demand for tickets has pushed the average asking price of a 2018-19 Boston Celtics ticket is up 40% compared to last season. Below is how Celtics tickets prices stack up on the secondary market and across the league.

As you can see, prices are at their peak since TicketIQ.com began tracking data in 2011. The next highest average was in 2015-16, when Boston finished second in the Atlantic Division, but got knocked out of the playoffs in the first round. Last year, the Celtics were second in both the Atlantic Division and the Eastern Conference. They lost to Cleveland in seven games in the Eastern Conference Final.

With a $234 average asking price, Celtics tickets are ranked No. 5 in terms of price across the NBA. The Golden State Warriors are ranked No. 1 with a $463 average asking price. Celtics tickets have always been tough to come by, and season tickets are sold out once again, though fans can join a waiting list.  Single-game tickets are sold out for many of the biggest games, including the October 16 home opener against the Philadelphia 76ers. But Ticketmaster does have some primary market tickets available through the season, including seats in Balcony 325, Row 15 for $52.50 for the December 10 New Orleans Pelicans game or in Balcony 310, Row 5 for $105 for the December 21 Milwaukee Bucks game. On the secondary market, TicketIQ.com has seats available for all games, many with the company’s Low Price Guarantee.

It’s no surprise that the two most expensive games at TD Garden are the January 26 Golden State Warriors and February 7 Los Angeles Lakers games. There are 39 NBA titles between the three times – and Boston has 17 of those. The defending champion Warriors are the NBA’s currently royalty, having won three titles in the last four seasons. The average asking price for the Warriors game is $632 with a get-in price of $185 while the average asking price for the Lakers game is $628 with a get-in price of $200. It’s fair bet that ticket prices will rise if the Celtics and Warriors continue to be contenders or the new LeBron Lakers can find their way back into the mix. 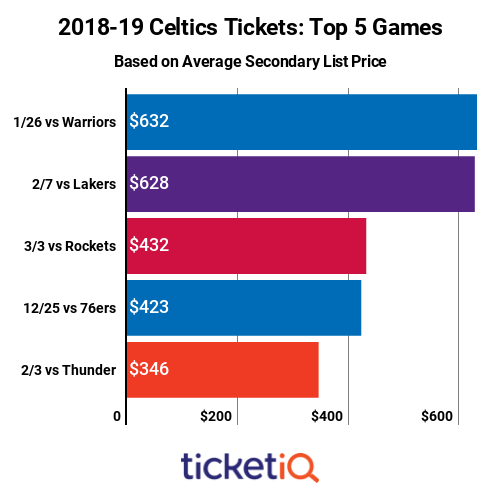 Where to Find The Cheapest Pacers vs. Celtics Tickets for 2019-20 Season

Where to Find Cheapest Celtics vs. Bucks Tickets for 2019-20 Season

Where to Find Cheapest Celtics vs. Knicks Tickets for 2019-20 Season