Where To Buy 2022 Cleveland Browns Tickets

On the secondary market, TicketIQ has Fee-Free Cleveland Browns tickets which also include a Refund Guarantee. Our Refund Guarantee states that if an event is canceled or deemed unfit for fans to attend, TicketIQ will refund ticket buyers in as soon as 15 days. That means that you can buy from TicketIQ worry-free. Customers on TicketIQ save between 15%-25% compared to other secondary market ticketing sites.

How Much Are 2022 Cleveland Browns Tickets 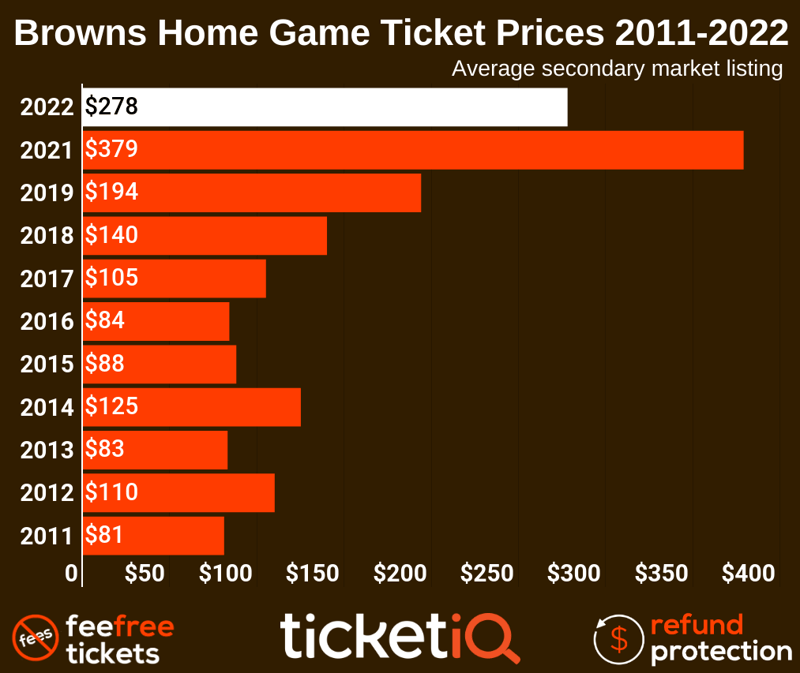 On the primary market, season tickets are no longer available, but each fan can join the waiting list and make up to four season ticket deposits for $100 per seat.

FirstEnergy Stadium has the following premium seating ticket options: there are four hospitality selections in addition to several suites.

The Landing, which accommodates 80 guests, is an outdoor club above the Dawg Pound. Each ticket has all-inclusive food and soft drinks along with two adult beverage drink tickets per each guest that is at least age 21.

The Orange and Brown Rooms, which are on the suite level, can have a combined 70 guests: 40 in the Orange Room, and 30 in the Brown Room. These rooms, which open two hours before kickoff, also have all-inclusive food and beverage.

The VIP Locker Room, which can have up to 40 guests and also opens two hours prior to kickoff, is found on the event level concourse. Like the other hospitality options, the ticket allows for all-inclusive food and beverage.

There are also suites options at FirstEnergy Stadium: there are enclosed (10 to 14 tickets), standard (13 to 16 tickets), and party (40 tickets) suites that can be purchased for a single game and for the whole season. These suites, which can be either city view or lake view, include complimentary game day programs and roster cards as well as wide, plush seating.

To manage your Browns tickets, the team has a mobile app available on the App Store and Google Play. The app is also used for mobile entry into the venue. The Browns require ticket holders to use mobile tickets to enter FirstEnergy Stadium, and it is suggested to add the ticket to your phone’s mobile wallet to avoid slow WIFI or cellular signal while entering the stadium.

How Much Are 2021 Cleveland Browns Tickets

At the Week 12 point of the season, the Browns are 6-5 and sit 4th in the AFC North. The team's attendance rate is 100% of full capacity so far. The average price for Browns tickets is $379, which is an increase of 95.4% from 2019. The cheapest remaining game at FirstEnergy Stadium is the December 18th game against the Raiders, where the cheapest tickets start under $50. The most expensive remaining home game of the season is on January 9th against the Bengals.  For that game, the cheapest ticket starts at $75, with the cheapest lower level ticket going for $124 in section 144.

The Cleveland Browns are going to operate at full capacity for the 2021 season. The team is encouraging fans to follow CDC guidance that recommend wearing face coverings in all indoor settings when they attend games at FirstEnergy Stadium.

You are required to follow all six-foot physical distancing markers that will be displayed throughout common areas inside and outside stadiums. These markers will help you line up for security screening, restrooms, shops and concessions. Remember, we're in this together so please be respectful of other fans and their space.

Face coverings will be mandatory for anyone in-stadium (fans and staff) and must be worn at all times (other than while actively eating or drinking), including during security screening. Look at it as another way to rock your team's colors and be a good teammate – Because wearing a face covering not only helps to protect you but also other patrons.

Hand sanitizer will be readily available for your use throughout the stadium, and fans are encouraged to use it regularly.

If you're in the stadium and begin to feel ill, you should find help immediately. A dedicated isolation area will be available for any fan who begins to feel ill after entering the stadium. The stadium's onsite medical team will be fully prepared to treat you on-site and provide you with personal protective equipment (PPE), if necessary. If you feel ill at any point before leaving or on your way to the stadium, we ask that you please be a good teammate and stay home.

Follow all posted signage to help maintain physical distancing. Check your team's specific guidelines to see if the use of staircases, elevators, and escalators are modified so that everyone flows in the same direction. Be smart and continue to abide by physical distancing markers that appear in elevators and on escalators.

We are working to reduce congestion when entering and exiting stadiums. This includes utilizing different entrances and exits for stadium staff and fans. Check your team's specific guidelines to see if there are designated entrances and exits that you should use and to see if your team will be assigning or staggering arrival and departure times. This will be your safest play and will help save you time.

Proximity to Players and Each Other

Game tickets will be distributed in "pods" to support physical distancing between each group of ticketholders attending together, with the expectation that fans will be attending games with family members they have been sheltering with and/or with trusted acquaintances. These ticketing pods will be arranged six feet apart from the next seating pod (both in the same row and in front/behind the pod). For this reason, please make sure to sit in your assigned seat as stadiums will be blocking off unassigned seats as part of this effort.

FirstEnergy Stadium is now offering Express Entry making fan access a seamless experience. You will need to visit the enrollment site where you will be prompted to take a headshot photo with and without a mask. When you arrive at the stadium, you'll be able to save time by using the Express Entry kiosks located at each gate.

To manage your Browns tickets, the team has a mobile app available on the App Store and Google Play. The app is also used for mobile entry into the venue. The Browns require ticket holders to use mobile tickets to enter FirstEnergy Stadium, and it is suggested to add the ticket to your phone’s mobile wallet to avoid slow WIFI or cellular signal while entering the stadium.

How Much Are 2020 Cleveland Browns Tickets

On the primary market, the Browns single-game ticket website page includes Ticketmaster links to each game, and tickets start at $59 at FirstEnergy Stadium. The cheapest seats are upper-level tickets on November 1 against the Las Vegas Raiders and November 15 against the Houston Texans. The get-in prices for these contests on the secondary market are $70 and $59, respectively.

Although secondary market inventory is limited, TicketIQ has seats available for all Cleveland Browns home games. The average ticket price on TicketIQ is $332, which is in the middle of the pack in the league. The secondary market price for Browns tickets has increased by 71 percent since last year.

Cleveland Browns tickets went on sale on July 15th on the primary market through Ticketmaster, and immediately sold out, which is new territory for the Browns. The result is the secondary ticket market is the best way to find Browns ticket in 2019.

How Much Are 2019 Cleveland Browns Football Tickets

The average asking price for a Browns tickets on the secondary market is $194, up from $67 in 2018, and the highest of the decade. Browns tickets are still among the cheapest in NFL — they’re ranked No. 23 in terms of price — meaning fans get one of the best deals in the NFL for home games in Cleveland.

On the secondary market TicketIQ has Low Price Guarantees on Browns tickets for all games on the 2019 schedule, in addition to Low Price Guarantees on all NFL tickets, which means that if you find a secondary market ticket for less on a site like StubHub or SeatGeek, we’ll give you 200% of the difference in ticket credit. TicketIQ customers save an average of 5%-20% compared to StubHub and SeatGeek.

Dating back to their Houston Oilers days, the Titans and Browns have played consistently since 1970. The Browns hold an all-time series advantage, 35-31, but lost the last meeting, 12-9, in overtime on October 22, 2017. This game is the home and season opener for the Browns, and is one of four with a secondary market average asking price of more than $200.

A big draw after getting to the Super Bowl last season, the Rams game is trending as the fourth priciest on the secondary market. The Browns and Rams have played on and off since 1950, but this game will be the Rams’ first visit to Cleveland since leaving St. Louis after the 2015 season. The Rams have won the last two, including the last meeting at St. Louis on October 25, 2015.

The most expensive game on the secondary market, the Seahawks and Browns have played less than 20 times in history, most recently in 2015 at Seattle. This game will be the Seahawks first visit to Cleveland since 2011, when Seattle won, 6-3.

The Browns will be looking to break a two-game losing streak against the Bills. Both games were at Buffalo, and the teams last played in 2016. The Browns hold a 12-9 all-time series advantage and the Bills will be playing at Cleveland for the first time since 2013.

Cleveland’s closest regional rival, the Steelers and Browns both play in the AFC North, and this is the oldest rivalry in the NFL. Sometimes called the “Turnpike Rivalry” or the “Turnpike War,” the Steelers have owned the rivalry of late and have a 75-58-1 all-time series advantage. Though the Browns didn’t win a single game in 2017 while the Steelers won the division, Pittsburgh beat Cleveland twice, but by a total of only seven points. Last season, the teams played to a 21-21 tie on September 9 and the Steelers beat the Browns, 33-18, on October 28.

The second cheapest game in terms of secondary market average asking price, the Browns and Dolphins have little history. Cleveland has won the last two, in 2016 and 2013, but the Dolphins hold an 11-8 all-time series advantage. The game will be the first for Miami in Cleveland since 2013.

Another key regional rivalry, this game pits Ohio’s two NFL teams against each other. Both teams were founded by Paul Brown and the games are sometimes referred to as the “Battle of Ohio.” The Bengals have a 50-41 all-time series advantage, though Browns won both meetings last season. Despite the rivalry, this game is the cheapest on the secondary market.

The Ravens and the Browns have a bit of a complicated history, since the team now known as the Ravens began its life as the Cleveland Browns before Art Modell moved the team to Baltimore. The rivalry started in 1999 when Cleveland got its new Browns. The teams have never met in the postseason, and the Ravens hold a 30-10 all-time series advantage.