› Milwaukee Brewers  › Where To Find The Cheapest Brewers Playoff Tickets

Primary market tickets for the Milwaukee Brewers Wild-Card Game and two potential National League Division Series games at Miller Park are not yet available, but will be via the Brewers website. When the Brewers do release tickets, fans can purchase online only and tickets will be delivered via the MLB Ballpark App.

On the secondary market, TicketIQ has Low Price Guarantees on sold out Milwaukee Brewers playoff tickets and on all MLB playoff tickets. That means that if you find a secondary market ticket for less on a site like StubHub or SeatGeek, we’ll give you 200% of the difference in ticket credit. TicketIQ customers save an average of 5%-20% compared to StubHub and SeatGeek. Below is a seating map and zone by zone pricing for their first potential NLDS game. 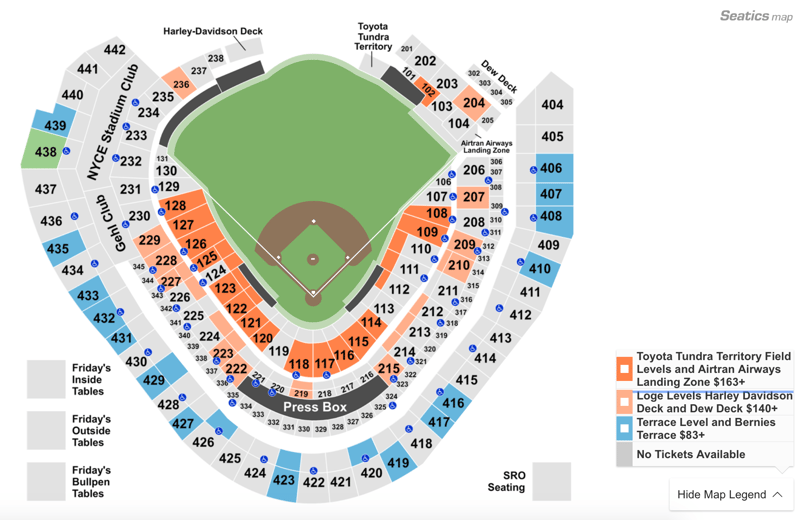 How Much Are Milwaukee Brewers Playoff Tickets

Primary market tickets will range in price from $50 for standing-room only tickets to $245 for Field Diamond Platinum for the Wild-Card game, set for October 1. The cheapest seats are $55 in Bernie’s Terrace and Terrace Reserved. For both ofthe possible NLDS games, standing-room tickets will start at $40, the cheapest seats in Bernie’s Terrace and Terrace Reserve will be $45, and the priciest seats will be $235 for Field Diamond Platinum.

On the secondary market, tickets to the Wild-Card game start at $67 in Terrace Reserved 438, and the priciest ticket is trending at $379 for a seat in Row 2 of Field Diamond Box 125. Secondary market tickets for the two possible NLDS games at Miller Park start at $80 and $84, respectively in the 400-Level Terrace Sections, and Field Boxes start at $218 in Row 8, Field Box 109 toward the end of the first-base side for the first potential NLDS game at Miller Park. For the second potential game, Field Box seats start at $245 in Field Box 122, in the infield on the third-base side.

The average asking price on the secondary market for Brewers home NLDS game is $173, making it the second cheapest in the NL, ahead of $164 for the Atlanta Braves. Across MLB, the priciest Division Series will cost fans an average of $366 at Yankee Stadium.

Click links below for Low Price Guarantees from TicketIQ

What Are Dates For Brewers Playoffs at Miller Park

Major League Baseball has announced the schedule for the 2019 Postseason, which is set to open with the National League Wild Card Game on TBS on Tuesday, October 1. The division series begins on October 3, while the LCS begins on October 11, with Game 1 of the World Series starting on October 22. The Brewers have secured a spot in the playoffs, but it’s unclear whether they’ll host the Wild-Card game or have to travel. If the Brewers and Nationals end the season with the same record, the Brewers will host because they won the season series against the Nats. Should Milwaukee win the Wild-Card game, it will play the Los Angeles Dodgers in the NLDS, hosting up to two games, likely October 6 and 7.

Where To Buy 2021 MLB Tickets Fans are coming back to MLB stadiums for 2021 and TicketIQ has MLB tickets that are Fee-Free and come with a Refund Guarantee. Our Refund Guarantee states that if an…