Dead and Company is back at it this fall and winter, with 10 shows planned, taking place at Madison Square Garden, Nassau Coliseum, Hampton Coliseum as well as four game in California, at the Forum in LA and two shows at the Chase Center, including the venue's first-ever New Year's Eve Show.   Ticket for the New Years Eve show start at $152, which is the most expensive show in California, but still significantly cheaper than the Madison Square Garden shows.

For the entire run, tickets are completely sold out via Ticketmaster, which means that the secondary market is the best options. While there are still some 'blue dot' tickets available on Ticketmaster, they're all platinum seats, which means they're priced in line with the secondary market. The Halloween show and the November 1st show at Madison Square Garden are by far the most expensive as the below show.

In addition to the slim picking on the primary market and secondary market options, there's also a brisk business of ticket trading and below face price sales for Dead and Co shows, mostly enabled on CashorTrade.org, where all tickets for sale are listed at or below face price. 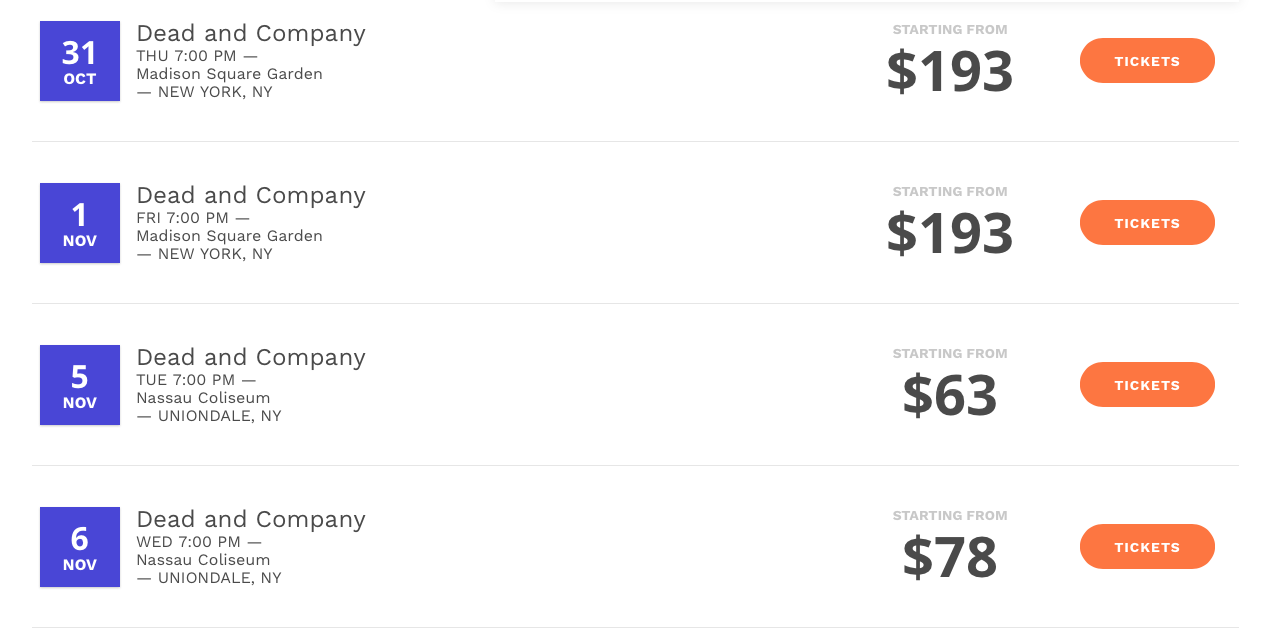 TicketIQ sell Tickets for for Sold Out Sports, Music and Theater events. TicketIQ is committed to the Transparent Ticketing, and we make much less on sold out tickets compared to other major marketplaces like StubHub and Vivid. That means ticket buyers save from up to 25% on TicketIQ on sports, music and theater. We're able to do this because we also work with teams, venues, and other ticket owners, to help them sell tickets at face price, directly to consumers like you, through Ticketmaster, Frontgate, Eventbrite and other primary ticketing platforms. You can read our Music Buying Guide that we think is the most objective advice on where to find the best deals on the biggest concert tours, whether they're 'sold out' on TicketIQ or 'unsold' on the primary ticket market.


Dead & Company kicked off it's 6th year of touring with remaining Grateful Dead members Bob Weir, Mickey Hart, and Bill Kreutzmann leading the way with John Mayer bridging to pop and Oteil Burbridge (Allman Brothers), and keyboardist Jeff Chimenti (Ratdog), reinforcing the Jam-band peidgree.  For the 2019 tour, 10 stops are at an Amphitehater, with six shows at either a football or baseball stadium, including a show at Citi Field in New York, Gillette Stadium for New England fans, Wrigley Field in Chicago, and Folsom Field in Boulder, Colorado where secondary market tickets start around $100 on the primary market via CU Tickets and and secondary market.  Like most of the shows on the 2019, the more expensive tickets including the floor are mostly sold out, with cheaper tickets still available for sale.

That means it's important to check both primary and secondary markets to make sure you get the best deal on Dead and Co tickets. Ticketmaster is the best source for unsold primary tickets, for all shows other than Citi Field and Boulders.  TicketIQ has low price guarantees for sold out secondary market tickets for all stops on the Dead and Company 2019 Summer Tour. The TicketIQ Low Price Guarantee means that if you find the same ticket for less on another secondary site site like Stubhub or Seatgeek, we'll give you 200% of the difference in ticket credit. TicketIQ customers save an average of 5%-20% on Music, Sports and Theater tickets.  In addition to Dead and Co., TicketIQ also has Low Price Guarantees on all Summer concert tickets.

Secondary market ticket prices for 2019 Dead and Company tour ranges from $50 to $100, with a floor seats or pit tickets going for around $300 most nights. Get started saving by downloading the TicketIQ app for $20 off your first ticket purchase 📲 🎟️ 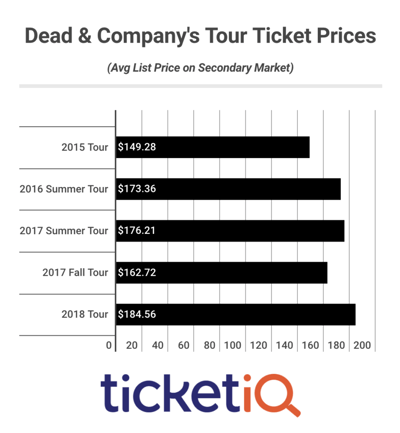 Though the band has not released any albums, concerts from 2016 and 2017 are available on CD, through iTunes or on the Livedead.co website.

Besides touring, Dead & Company has played two stand-alone shows in San Francisco over the the last two years – a free show at The Filmore in 2016 and a benefit at AT&T Field last November.

No matter where you are in the U.S., TicketIQ.com is your place to shop for Dead & Company tickets. Among the company’s Low Price Guarantee Listings, mid-range tickets for the opening show in Mansfield, Mass. in the center of the seating area in Section 6, Row CCC can be had for $307 or tickets for the June 29 show at Washington’s Gorge Amphitheater can be had for $129 in Section 202, Row 26.

After weeks of rumors, the first leg of Pearl Jam's 2020 North American tour has been announced. Kicking off on March 18th in Toronto, the band will make 16 stops, concluding on April 19th in…

What Are You Doing New Year's Eve? A Look at the Biggest NYE 2015 Concerts