On the secondary market, TicketIQ has Fee-Free Los Angeles Dodgers playoff tickets which also include a Refund Guarantee. Our Refund Guarantee states that if an event is canceled or deemed unfit for fans to attend, TicketIQ will refund ticket buyers in as soon as 15 days. That means that you can buy from TicketIQ worry-free. Customers on TicketIQ save between 15%-25% compared to other secondary market ticketing sites.

Dodger Stadium will operate at full capacity for the 2021 MLB Playoffs. All guests ages 12 and over will be required to show proof at stadium entry gates, prior to entry, of either full vaccination against COVID-19 (i.e., at least 14 days have passed since they have received their second dose of the Pfizer or Moderna vaccine, or their single dose of the Johnson & Johnson vaccine) or a negative COVID-19 viral test (both PCR and antigen tests will be accepted) taken within 72 hours before the start time of the event.

How Much Are 2021 Los Angeles Dodgers Playoff Tickets

The overall series average for the Braves and Dodgers NLCS is $338, 18% less expensive than the ALCS. Braves home games the average ticket price is $358, which is 15% higher than the Dodger, which has an average price of  $311. While prices may seem low for the Dodgers, that average price is actually 124% higher than when they last placed in the NLCS (with fans), when the average price was just $139.
The cheapest tickets for games 1 and 2 of the series in Atlanta are both under $90. If the series ends up back in Atlanta, the cheapest tickets jump to $113 for game 6 and $169 for a potential game 7. For the three games in Los Angeles, the cheapest tickets are $136 for game 3, $133 for game 4, and $146 for game 5.
Below is a look at Dodgers NLCS ticket prices since 2013. This year's series is the second least expensive over that time frame for LA. 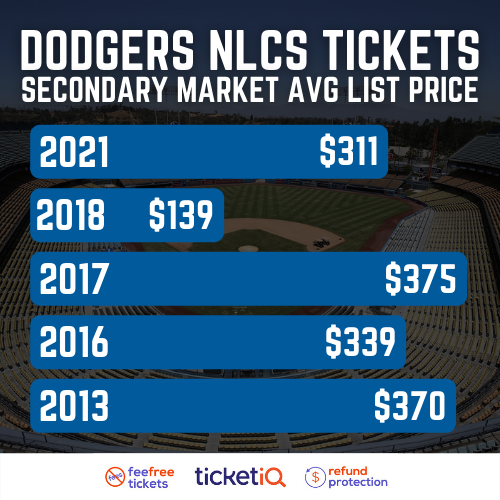 How To Find The Cheapest Los Angeles Dodgers Tickets