How To Get Cheapest Guns N Roses Tickets + Onsale Details

UPDATE: Guns N Roses have reschedule their 2020 tour dates due to the Coronavirus pandemic. All new dates can be found below.

Gun N’ Roses concluded their Not in This Lifetime world tour back in November of 2019, which grossed over $500 million and ran for almost three years.  The band isn't ready to settle down just yet and have announced the next leg of their on-going tour, which will take place in stadiums across the country in the summer of 2020.

TicketIQ has a Low Price Guarantee on Sold Out Guns 'N Roses tickets for every stop on his "Not In This Lifetime Tour", in addition to Low Price Guarantees on all concert tickets, which means that if you find a secondary market ticket for less on a site like Stubhub or Vivid Seats, we’ll give you 200% of the difference in ticket credit. TicketIQ customers save an average of 5%-20% compared to Stubhub and Vivid Seats.

How Much Are Guns N Roses Tickets

For Not in this Lifetime tour, the primary market fans could choose from standard seats, VIP Packages or Official Platinum tickets. VIP packages will range in price from $350-$795. The Paradise and Nightrain Lounge VIP packages give fans entry into the Nightrain Lounge, which will have appetizers. Fans will get two drink tickets, as well as a VIP red-carpet photo opportunity. The Patience-Early Entry VIP package allows for early entrance into the pit. All VIP packages include tickets to the show.
On the secondary market, the July 4th North American opener in Milwaukee, WI starts at $127 while the closing August 26th show in Montana starts at $153. The July 26th show in Chicago, IL starts at $151 while the August 15th show in Tampa, FL starts at $115. Most other shows start at just under $100.

Thanks to Setlist.fm for the data.  You can visit them here for the latest GNR 2019 song count. In addition to originals, the band also played seven covers on their opening night show.

Once one of the early 90’s most dysfunctional bands, the latest Guns ‘N Roses reunion tour looks like it’s in the long haul. Following the success of “Not In This Lifetime”, the quintet has announced an additional 14 tour dates this fall. While the first leg of the tour focused on stadiums, the fall leg will see the band in the more “intimate” setting of arenas.

The stretch begins October 8th at Philadelphia’s Wells Fargo Center and sees the band blaze through some of east’s most iconic venues including 2 stops at Madison Square Garden, the TD Garden in Boston and Toronto’s Air Canada Centre. After a quick mid-west swing including Chicago’s United Center and the brand new Little Caesar's Arena in Detroit, the band will conclude the tour on their familiar West Coast including the T-Mobile Arena in Las Vegas, Oakland’s ORACLE Arena and two tour finale shows in GnR’s home town of Los Angeles at the Staples Center and The Forum.

The tour has already been flooded with opening acts as diverse as The Darkness and The Kills to The Pretenders and The Killing Joke, and the new leg is no different. They’ll be joined by bands such as Deftones, Live, ZZ Top and Royal Blood on the newly announced leg.

Looking at the secondary market, TicketIQ says the average asking price for the Fall Leg is $329. Quicken Loans Arena on October 26th is the cheapest of the trek with an average asking price of $259 and cheapest available ticket of $81. Conversely, the October 11th stop at Madison Square Garden is the tour’s most expensive date. The average ticket price is $458 with the cheapest resale ticket listed for $88. With the exception of the Air Canada Centre on October 29th, all the new tour dates have a “get-in” price below $100.

How to Find Cheapest Tickets for Rolling Loud Miami+ 2020 LineUp 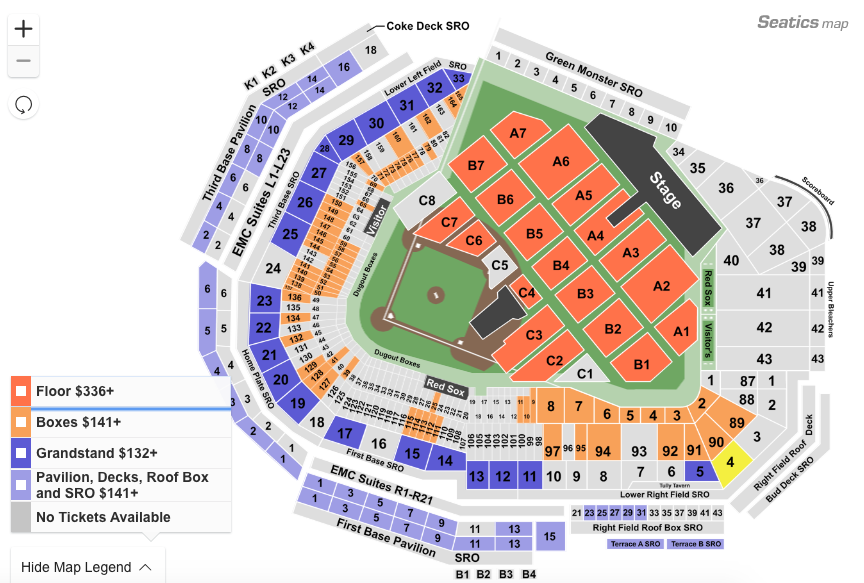 In the 17 years since Fenway Park first began hosting concerts, the home of the Boston Red Sox has welcomed a variety of big-name acts as part of the Fenway Concert Series.

Justin Bieber, Guns N' Roses Round Out This Week's Most Expensive Concerts List