Primary market NCAA Men's Basketball Tournament tickets are available via Ticketmaster. However, currently much of the primary market is sold out.

On the secondary market TicketIQ has 2021 NCAA Men's Basketball Tournament tickets that are Fee-Free and come with a Refund Guarantee. Our Refund Guarantee states that if an event is canceled or deem unfit for fans to attend, TicketIQ will refund ticket buyers within 15 days. That means that you can buy from TicketIQ worry-free. You can also buy your NCAA Tournament tickets now and pay later using Quadpay.

How Much Are 2021 Final Four Tickets

With extremely low secondary market inventory (around 100 tickets for the semifinals and 550 championship game) prices for this year's Final Four are the highest we've ever seen. Currently, the get-in price for the Semifinals is $808, and ticket prices go as high as $7,700. Championship game tickets start at $602 and go as high as $15,000.
As of now, both get-in prices are the most expensive for the Final Four that we've ever tracked. The semifinal get-in price is 145% higher than any previous Final Four semifinal, and the Championship Game is 95% higher than any previous Championship Game.
Below are two infographics showing how this year's prices compare to previous seasons: 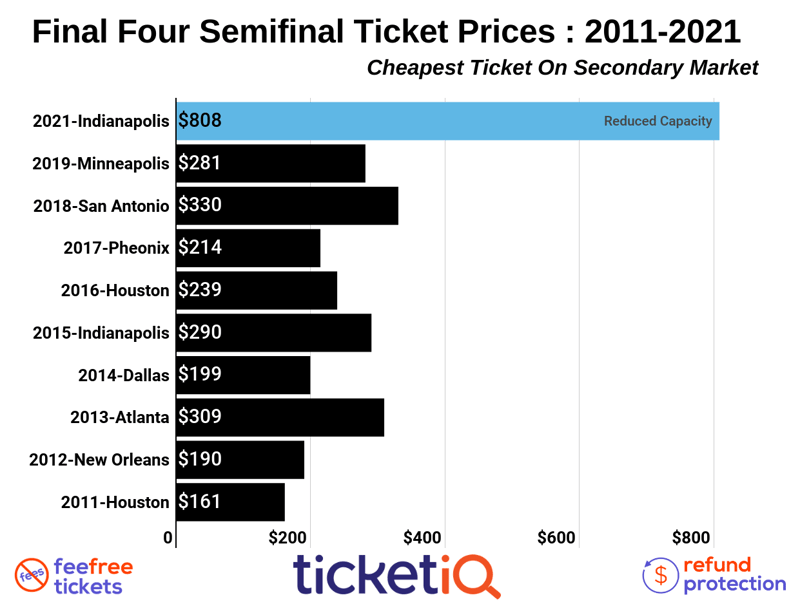 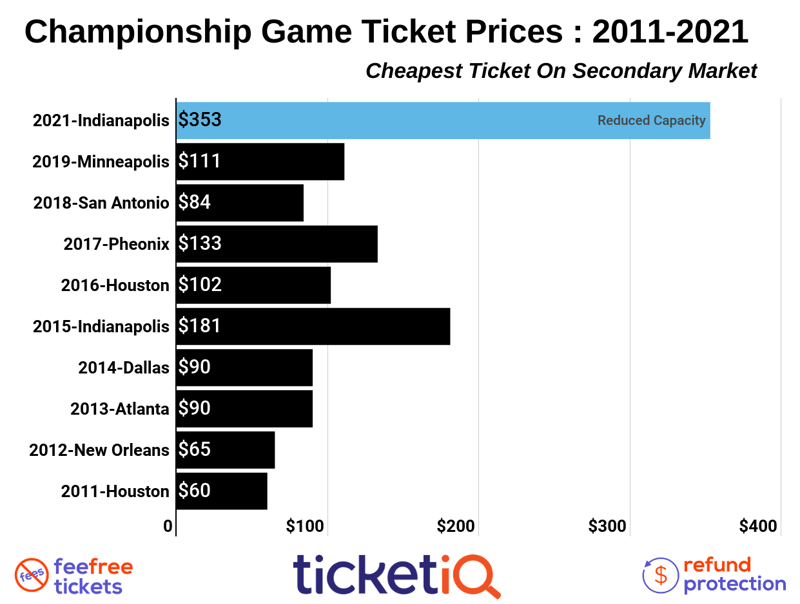 How Much Are 2021 NCAA Men's Basketball Tournament Tickets

In terms of secondary market pricing, below is a look at the average secondary market listing for each venue for the tournament. Limited inventory/allowed attendance is driving prices. Hinkle Fieldhouse with only just over 200 tickets available and attendance limited to 2,500, is the highest-priced with an average of $415 per ticket. The second most expensive opening round venue is Indiana Farmers Coliseum with an average price of $281 per ticket, and quantity is also very limited and attendance is limited to 1,700. On the other end of the spectrum is Lucas Oil Stadium, where there are over 15,000 tickets available and up to 17,500 can attend, prices are average just $213. 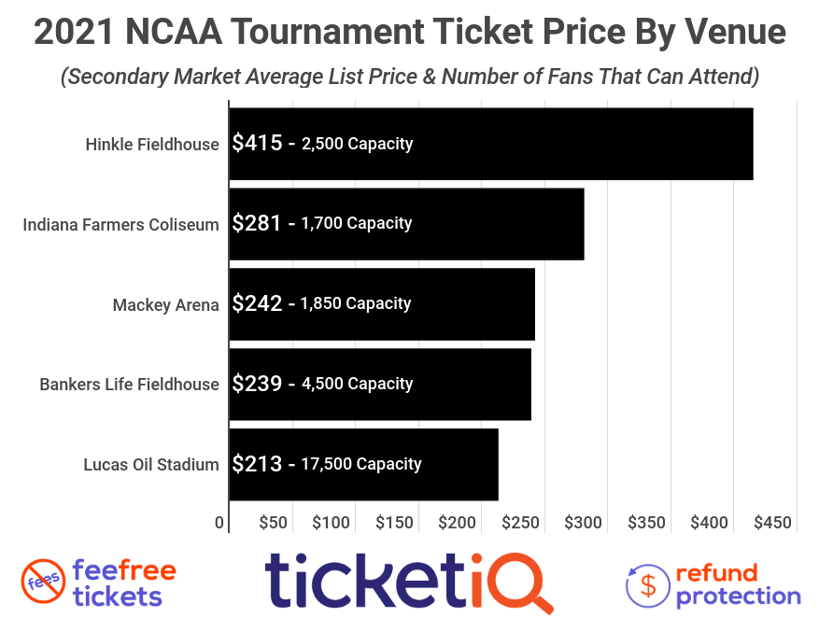 When compared to the last NCAA Tournament that was played in 2019, the overall secondary market ticket average (excluding the Final Four) was $237. This year that price is $257, which is 8% higher than the 2019 tourney. Below is a breakdown of how each round in 2021 compares to 2019: 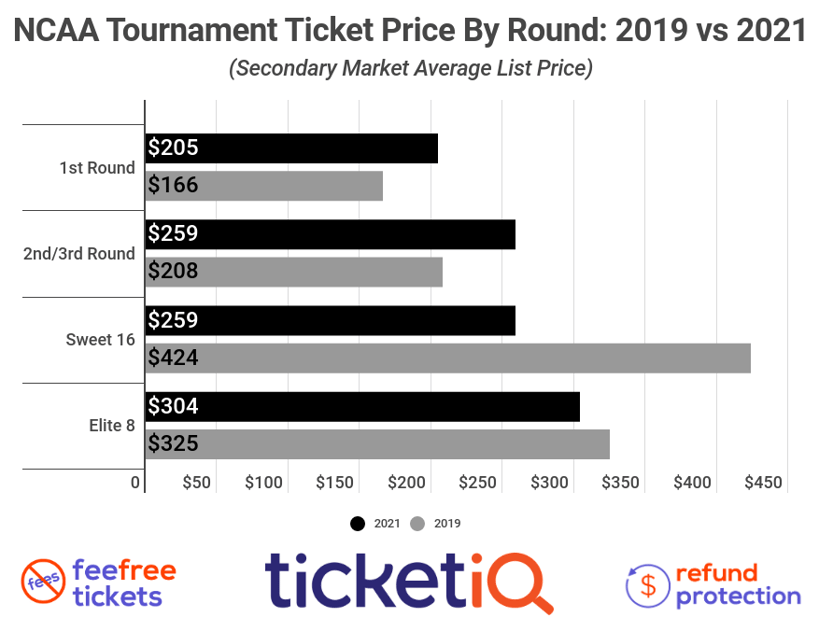 The entire 2021 NCAA Men's Basketball Tournament will be played in Indiana with a bubble-like format. Most of the games will be played at multiple venues in Indianapolis, with others taking place in Bloomington and West Lafayette.

It was also recently announced that fans will be allowed to attend all rounds of the tournament. Attendance will be limited to 25%, and masks and social distancing will be required.

What are the 2021 NCAA Men's Basketball Tournament sites

The NCAA has decided to hold a centralized bubble around Indianapolis. All games will be played across six venues. Those sites include:

Where Are Dates and Locations For 2020 March Madness:

Where Are Dates and Locations For First Four

Where Are Dates and Locations For First and Second Rounds

Where Are Dates and Locations National Semifinals (Final Four) and Championship

Forget the crack of the bat, it’s nearly time for March Madness! That crazy month of endless last-minute shots, upsets (we hope) and basketball you can’t tear yourself away from. This year’s Final Four is set for Minneapolis, marking the second time in just over a year that all eyes will be on the Flour City. Minneapolis hosted Super Bowl LII in 2018.

The road to Minneapolis starts for four teams in Dayton, Ohio on March 19-20, and winds across the country before the NCAA national semifinals and championship will be decided at U.S. Bank Stadium.

This year’s tournament is already setting up to be one of the most expensive in history. The current average asking price for an all-session pass to the Final Four is trending at $1,118 on the secondary market, according to secondary ticket marketplace TicketIQ.com, and if that number holds, it would be the second priciest of the decade.

With just a few days remaining before the first games tip off, the question is this: Will Final Four prices follow the pattern of the last two years, when they rose at least 39% between Selection Sunday and the Final Four? Or will they follow five of the previous six years, when prices dropped up to 49% between Selection Sunday and the tip-off of the semifinals?

Whatever happens, now is the time to buy, at least for the opening rounds and the regionals, as primary market seats are already sold out at some venues.

Generally the two most coveted tickets of the postseason, national semifinal and championship tickets reflect high demand. Though fans get fewer games – a total of three for the all-session pass – they are assured of seeing the ultimate national champion play, even if they only buy semifinal tickets. The average asking price of $1,118 would rank No. 2 over the last decade if it holds. Fans pushed prices for an all-session pass to $1,369 on Selection Sunday in 2015, which was their highest point. When the national semifinals started, that average had dropped to $827.

Dayton, Ohio has been part of the NCAA Tournament since 2011, when it began hosting the First Four. It’s usually the best value for tournament tickets, and this year is no exception, with a pass to both sessions, March 19 and 20, trending at $172 on the secondary market, according to secondary ticket marketplace TicketIQ.com. On the primary market, an all-session pass costs $95, or $35 per session. The average asking price for individual sessions is $69 for March 19 and $75 for March 20. Inventory is limited on the secondary market, with only 44 all-session passes remaining, and even fewer individual session tickets left.

New England loves its basketball – maybe not quite so much as football – but fans have pushed secondary market ticket averages up to $647 for an all-session pass, the second highest among the eight First/Second Round events. On the primary market, the all-session pass at the XL Center is $171 for games scheduled March 21 and 23. Primary market prices by session are $59 for Session 1, $82 for Session 2 and $152 for Session 3. The secondary market get-in price is trending at $299 and the average asking price per session ranges from $232 (Session 1) to $327 (Session 3).

The cheapest ticket on the secondary market is for the Salt Lake City Regional at the Vivint Smart Home Arena, and there are no tickets for this site currently listed on primary market vendor Ticketmaster. SLC all-session passes are trending at $339 with a get-in price of $200, and only 379 all-session passes remain. There are 744 individual day tickets still available for Session 1.

The South embraces football over basketball, and Jacksonville doesn’t have much of a basketball culture, which makes it no surprise that the secondary market average for an all-session pass is the fifth cheapest across the country. For $470, fans can see all three sessions at the city’s Veterans Memorial Arena. On the primary market, that same pass is $198, which is tied with Columbus as the second most expensive. Fans can get into each session individually for $65 or less on the primary market, as compared to $200 or less on the secondary market.

None of the teams in the latest Top 25 are located in Oklahoma, and only one from Texas is, so fans are driving down prices for this First/Second Round event at the BOK Center. The $369 average asking price on the secondary market for an all-session pass for March 22 and 24, is the second lowest of the eight host cities. And the $150 primary market all-session pass is tied with San Jose for the least expensive. Fans in Tulsa can into any of the three sessions for $65 or less on the primary market. The secondary market get-in price for an all-session pass is $175.

Ranked No. 1 in terms of secondary market average asking price, demand for tickets at Nationwide Arena has pushed the cost up to $665, making Columbus one of four sites with an average of $500 or more. The primary market cost of $198 for an all-session pass is tied with Jacksonville for the most expensive. Fans can still buy primary market tickets for Sessions 1 and 2 on March 22 for $50, and $60, respectively, but Session 3 on March 24 is already sold out. On the secondary market, Session 3 tickets are trending at $267.

The following teams will play at Columbus: Iowa, Cincinnati, Colgate, Tennessee, Washington, Utah State, Iona and North Carolina. The highest seed will be No. 1 North Carolina.

The following teams will play at Columbia: Oklahoma, Ole Miss, Gardner-Webb, Virginia, North Carolina Central-North Dakota State winner, Duke, UCF and VCU. The highest seeds will be No. 1 Virginia, and No. 1 Duke.

The $395 average asking price for an all-session pass at the SAP Center for March 22 and 24 is the third cheapest, while the $150 face-value ticket is tied with Tulsa for the cheapest. All sessions are currently available on the primary market for between $50-$65, while demand on the secondary market has pushed Session 3 on March 24 to $273 – which is the same as the cheapest secondary market all-session ticket available.

The following teams will play at San Jose: UC-Irvine, Kansas State, Oregon, Wisconsin, Liberty, Mississippi State, St. Louis and Virginia Tech. The highest seeds will be No. 4 Kansas State and No. 4 Virginia Tech.

The second cheapest of the regionals, the average asking price for an all-session pass at the Honda Center is trending at $761 for March 28 and 30, and the get-in price is $310. According to TicketIQ.com, this regional has the second fewest number of tickets still remaining on the secondary market – 425 all-session passes, but there are only 263 Sweet Sixteen and 160 Elite tickets remaining. This is the only regional for which primary market tickets are still available for all sessions -- $200 for an all-session pass, $110 for the Sweet Sixteen, and $100 for the Elite 8. The Honda Center seats 18,336 for basketball, and is the smallest venue among the four regional venues.

The second most expensive of the regionals, there are no primary market tickets listed on TicketMaster.com, but seats for both sessions or an all-session pass at the Sprint Center still remain on the secondary market. According to TicketIQ.com, there are 1,079 all-session passes still for sale on the secondary market, the highest availability of that kind of pass for any of the regionals. The venue seats 18,972 for basketball. The get-in price for the all-session pass is $329, which is more than $150 cheaper than the average asking price for the Sweet 16 alone.