Fans can also find seats on the secondary market, and TicketIQ has Low Price Guarantees on all sold out North Carolina basketball tickets on the 2019-20 schedule, in addition to Low Price Guarantees on all NCAA basketball tickets. That means that if you find a secondary market ticket for less on a site like StubHub or Vivid Seats, we’ll give you 200% of the difference in ticket credit. TicketIQ customers save an average of 5%-20% compared to StubHub and Vivid Seats.

Below are screenshots of primary & secondary market availability for a typical North Carolina home game at Dean Smith Center: 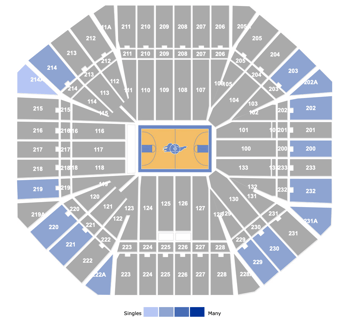 How Much Are 2019-20 North Carolina Tar Heels Basketball Tickets

Primary market tickets are available for some home games via Paciolan, and prices start at $55 for lower demand games and $80 for high demand games. According to the school website, the Yale, Georgia Tech, Clemson, Miami, Boston College, Duke, and UVA are sold out.

On the secondary market, the average asking price for tickets is $152, which is the 4th-highest in the NCAA this season. That price is $5 less expensive than last year's season average.

The priciest game on the secondary market is against the Duke Blue Devils on February 8. The cheapest tickets for the game are currently $561 each for seats in Section 228A, Row T on the corner. The primary ticket market is sold out for this contest.

Among the cheapest games of the season is the January 8 contest against the Pittsburgh Panthers. On the primary market, the cheapest ticket is $55 in several 200-level sections. Fans will find tickets for less on the secondary market, with seats starting at $19 for seats on the second level.

Season tickets and mini plans are not available for the Tar Heels this season, but fans can receive group ticket discounts for groups of at least 15. Fans who are interested can call the Carolina Athletic Ticket Office at 919-962-2296 or click here and fill out the form.

Below is a look at the Top 5 priciest North Carolina basketball games based on the cheapest ticket available on the secondary market.